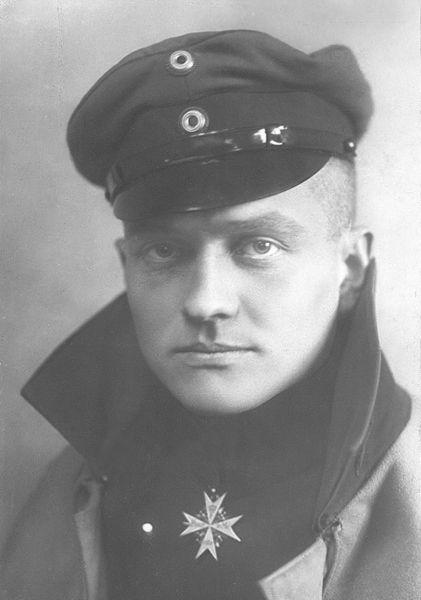 Manfred Albrecht Freiherr von Richthofen (*2 May 1892 , died 21 April 1918) was a German fighter pilot known as "The Red Baron". He was the most successful flying ace of World War I, being officially credited with 80 confirmed air combat victories. Richthofen was a member of an aristocratic family with many famous relatives.

Richthofen is also known as "le Diable Rouge" ("Red Devil") or "Le Petit Rouge" ("Little Red") in French, and the "Red Knight" or the "Red Baron" in English. The German translation of Red Baron is "der Rote Baron" ; Richthofen is known under this nickname in Germany as well.

Richthofen died during the war, and while he did not have the opportunity of publishing a revised version, he was quoted as saying the book was "too insolent" and that he was "no longer that kind of person".

Richthofen was born in Kleinburg, near Breslau, Silesia, into a family of old Prussian nobility. When he was nine years old, he moved with his family to nearby Schweidnitz. The young Richthofen enjoyed riding horses and hunting as well as gymnastics at school. In the protected game forests, he and his brothers, Lothar and Bolko, hunted wild boar, elk, birds, and deer. they collected and displayed their trophies.[citation needed] After both being educated at home and attending the local school at Schweidnitz, Richthofen began military training at age 11.Upon completion of cadet training in 1911, he joined the Ulanen-Regiment Kaiser Alexanders des III. von Russland (1. Westpreußisches) Nr. 1 ("Uhlan Regiment Emperor Alexander III of Russia 1st Regiment, West Prussia, Uhlan Regiment Number 1"), a cavalry unit, and was assigned to the regiment's 3. Eskadron.

When World War I broke out, Richthofen served as a cavalry officer on both the Eastern and Western Fronts. However, when traditional cavalry operations became obsolete due to machine guns and barbed wire, the Uhlans were used as infantry.Disappointed with not being able to participate more often in combat operations, Richthofen applied for a transfer to the Luftstreitkräfte (literally: Aerial Combat Forces), the "Imperial German Army Air Service", forerunner of the Luftwaffe. After a while his request was granted and he joined the flying service at the end of May 1915.

He was initially an observer flying on reconnaissance missions over the Eastern Front from June to August 1915, with Fliegerabteilung 69 ("No. 69 Flying Squadron"). On being transferred to the Champagne front, he managed to shoot down a French Farman aircraft with his observer's machine gun, but was not credited with the kill, as it fell behind Allied lines.

He then trained as a pilot in October 1915. In March 1916, he joined Kampfgeschwader 2 ("No. 2 Bomber Geschwader") flying a two-seater Albatros C.III. Over Verdun on 26 April 1916 he fired on a French Nieuport downing it over Fort Douaumont, although once again he gained no official credit. At this time he flew a Fokker Eindecker single-seat fighter.

After his first victory, Richthofen ordered a silver cup engraved with the date of the fight and the type of enemy machine from a jeweller friend in Berlin. He continued this tradition until he had 60 cups, by which time the supply of silver in blockaded Germany was restricted.

Rather than engage in risky tactics like his brother Lothar (40 victories), Manfred von Richthofen strictly observed a set of flight maxims (commonly referred to as the "Dicta Boelcke") to assure the greatest success for both squadron and individual fighter pilot. Contrary to popular imagination, he was not a spectacular or acrobatic pilot, as were others like his brother or the renowned Werner Voss. However, in addition to being a fine combat tactician and squadron leader, he was recognized as a superb marksman, and in combat he philosophically viewed his aircraft as merely a platform from which to fire his guns. Typically, as was the case for most squadron leaders, he would dive in to attack from above with the advantage of the sun behind him, and with other Jasta pilots covering his rear and flanks.

On 23 November 1916, Richthofen downed his most renowned adversary, the British ace Major Lanoe Hawker VC, described by Richthofen himself as "the British Boelcke." The victory came while Richthofen was flying an Albatros D.II and Hawker was flying a D.H.2. After this engagement, he was convinced he needed a fighter aircraft with more agility, though this implied a loss of speed. He switched to the Albatros D.III in January 1917, scoring two victories before suffering a crack in the spar of the aircraft's lower wing. After this incident, Richthofen reverted to the Albatros D.II for the next five weeks. Richthofen scored one kill in the D.III on 9 March, but the D.III was temporarily grounded for the rest of the month, so Richthofen switched to the Halberstadt D.II.

Richthofen returned to the Albatros D.III on 2 April 1917. He scored his next 22 kills in this type before switching to the Albatros D.V in late June. From his return from convalescence in October, Richthofen was flying the celebrated Fokker Dr.I triplane, the distinctive three-winged aircraft with which he is most commonly associated, although he probably did not use the type exclusively until after it was reissued with strengthened wings in November. Despite the popular link between Richthofen and the Fokker Dr. I, only 20 of his 80 kills were made in this now-famous triplane. In fact, it was his Albatros D.III that was first painted bright red and in which he first earned his name and reputation.

Richthofen championed the development of the Fokker D.VII with suggestions to overcome the deficiencies of the then current German fighter aircraft.However, he never had an opportunity to fly it in combat as he was killed just days before it entered service.

The new book about "the red baron" published in English and German shows Manfred Richthofen between myths and reality. It contains information about the new movie, a biography and the autobiography.

You may re-publish this article without any fees, but you should mention the author and the URL at the end of the article

Secura is accredited at ICANN for all generic Top Level Domains. Secura can register all generic top level domains and all active country domains http://www.com-domains.com

When domainnamebuyers.com was still independent, it listed the ICANN Registrar Secura from Cologne in Germany among the best registrars of the world. The position of Secura is almost unique:It is accredited for all generic Top Level Domains at ICANN, and registers almost all country Top Level Domains. Secura has contracts with many registries like DENIC, AFNIC, NOMINET for this purpose. Secura sells to resellers, but also to private customers, who visit Secura's website at http://www.domainregistry.de (German) or http://www.com-domain.com (English). The basic informations are also available in other languages - from Hungarian to Chinese. Secura gives support in many different languages: English, Spanish, Portuguese, Italian, German, Dutch, Swedish, Hungarian, Russian, Polish, Serbian, Croatian, Ukrainian, Finnish and Belorusian. Customers can easily pay by credit card, but also by many other ways.Secura publishs a Domains Blog,in order to inform about new developments in the domain business(http://www.20six.de/secura) You may re-publish this article without any fees, but you should mention the author and the URL at the end of the article

02-03-2009 | Media & Telecommunications
Secura GmbH
Tel-Domains: Great Opportunities for "gold digger"
With less than some days until the start of the .tel Landrush, Telnic Limited, the registry operator for the new tel-domains, announced today that it will not be holding any auctions for high value or premium domain names nor is it withholding any tel-domains from the Landrush, with the exception of a few names on a "reserved list" as required by ICANN and as needed for registry operations. “People
02-02-2009 | Logistics & Transport
Secura GmbH
Aero-domains with two and three letters
The actual regulations of com-domains and the policies of almost all registries exclude domain names with two letters. The aero-domain is the great exception: SITA has convinced ICANN to permit aero-domains consisting of two letters at certain conditions. Airlines or aircraft operator can register a specific aero-domain, which will be still more important in the future, when SITA is developping technical features as e.g. RFID. They can register the
08-22-2008 | Business, Economy, Finances, B …
Secura GmbH
Any professional can register pro-domains
What's new at .pro? Every licenced professional can get easily a pro-domain direct at the second level of .pro like yourcompany.pro or yourname.pro. And: .pro becomes cheaper. The pro-domains are an exclusive domain. All licensed and credentialed professionals and professional entities are eligible since September 8 to register pro-domains. The professional register at the official subdomains of .pro, but also directly at .pro. RegistryPro will continue to offer third
06-11-2008 | IT, New Media & Software
Secura GmbH
Success in US with us-domains
Known as “America’s Internet Address,” the us-domain is the official country code top-level domain for the United States. The us-domain name has been in existence since 1985 but was primarily used by government branches, departments and agencies, as well as schools and libraries. Since making the domain name available to the general public on April 24, 2002, NeuStar has enabled several hundred thousand U.S. citizens, residents, businesses, organizations and government