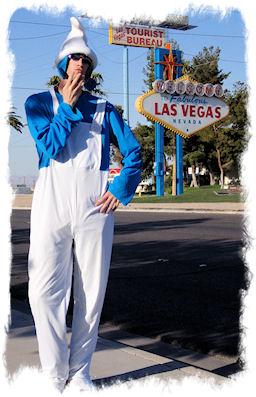 The fancy dress company, Jokers' Masquerade have recently included a new costume to their portfolio, known as a “Blue Gnome” it is based on a Smurf costume and has been a real success according to Beatrice Butler, the marketing manager for Jokers' Masquerade fancy dress.The Smurfs were created by a Belgian cartoonist called Peyo who started as series of cartoon strips that first featured in a Belgian publication in 1958 and tells the story a fictional group of small sky blue creatures who live “somewhere” in a forest.“The success of the Blue Gnome has taken us a little by surprise especially when we started getting people sending us photographs of themselves wearing the costume from all over the world, it was then that we decided to create the Smurf Holiday Map” says Butler. The Smurf Holiday Map allows people who have dressed up in a Smurf costume to send in the photo of themselves wearing the costume, to be placed on the map with the idea of seeing all the interesting places that the Smurf's have gone on “holiday”So far there are photos of the Smurfs holidaying in destinations as exotic as Las Vegas in America, the Gambia in West Africa, Dublin in Ireland, Amsterdam in the Netherlands, Copenhagen in Denmark and skiing in the French Alps!People who send in their entries not only get the chance to be added to the map, but also have a chance of winning a voucher to buy more costumes!Jokers' Masquerade (http://www.joke.co.uk) has the largest online collection of adult fancy dress costumes and Halloween costumes in the UK today.Follow the link for more on the Jokers' Masquerade, Blue Gnome Smurf Costumes and The Smurf Holiday Map http://www.joke.co.uk/publish.asp?what=smurfholiday&page=1Jokers' Masquerade Abscissa.Com Limited, Union House Kennet Side Newbury Berkshire RG14 5PX UNITED KINGDOM Website: www.joke.co.uk Contact: Marketing: marketing@joke.co.uk Media & Press: press@joke.co.uk Press Contact: Beatrice ButlerJokers' Masquerade has the largest online collection of adult fancy dress costumes and Halloween costumes in the UK today and has been in business and selling on the Internet since 2001. They have a 40,000sqft warehouse complex and orders placed before 4.00pm are shipped on the day of receipt (excluding weekends and Bank Holidays) complete with order and parcel tracking.

12-28-2020 | Sports
LolFinity
Lolfinity - Where One Can Get the Best League Of Legends Account
Website Overview Over many years the Lolfinity website is the most selling account of League of legends. Unlike other sites, this site is transparent and doesn't keep clients in the darkness of what they offer. The website offers players additional benefits that one won't get in any other place. The players in need of owning their own accounts can freely own one by just ensuring that they have valid purchases and
05-10-2019 | Industry, Real Estate & Constr …
Up Market Research (UMR)
On-the-go Breakfast Packaging Market 2019 | Worldwide Forecast 2025 | Major Play …
As per the latest research study published by Up Market Research, “Global On-the-go Breakfast Packaging Market” is estimated to grow at a healthy CAGR % in the coming years. The research report showcases qualitative and quantitative estimations by the industry analysts. The report documents first-hand data, post verification from the industry experts along with each industry manufacturers by the market valuation. Request Free Sample Copy Of this Report @ https://www.upmarketresearch.com/home/requested_sample/94453 On-the-go
08-30-2018 | Associations & Organizations
Data Bridge Market Research
Biodegradable Paper & Plastic Packaging Market Future Forecast and Trend Analysi …
This market report may be a comprehensive study on however the business is dynamic owing to Biodegradable Paper & Plastic Packaging market. Report is segmental into Manufactures, Types, Applications and Regions. Biodegradable Paper & Plastic Packaging market report additionally shares details of upstream raw materials, downstream demand, and production worth with some necessary issue that may result in market growth. completely different points coated during this report ar market summary,
07-25-2018 | Business, Economy, Finances, B …
Research Nester Pvt Ltd
Biodegradable Packaging Market Will Multiply At An Impressive CAGR Of 14.2% By 2 …
The global biodegradable packaging market is segmented into applications such as food packaging, pharmaceutical packaging, beverage packaging etc. Among these segments, food packaging segment is expected to occupy the top position in biodegradable packaging market during the forecast period. Further, food packaging leads the market with 70.2 % of share in overall global biodegradable packaging market. Global biodegradable packaging market is expected to flourish at a CAGR of 14.2% over the
08-23-2016 | IT, New Media & Software
DDoS-GUARD
UDP Flood attack volume increased by 71%
Hackers activity has decreased significantly, but they became more violent. Such a conclusion was reached by DDoS-GUARD experts after analyzing the statistical data for the 2nd quarter of 2016. When it comes to quantitative indicators, the last quarter can be marked by significant quantitative decline. The number of detected DDoS attacks is 57% lower than in the previous quarter and equals to 12583. But don’t get excited too soon, as
Comments about openPR
I can't but agree to the positive statements about your portal: easy to use, clear layout, very good search function, and quick editing!
Jens O'Brien, Borgmeier Media Communication