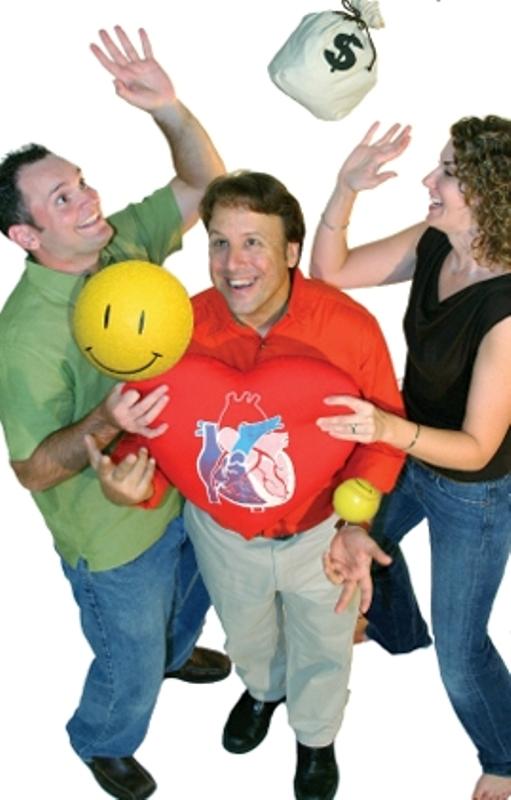 SAN ANTONIO – Les McGehee is well known as someone who “Plays Well With Others”. Now, the founder of the National Comedy Theatre (NCT) is bringing his hit comedy show of the same name to San Antonio."Plays Well With Others" is based on McGehee’s book, "Les McGehee Plays Well With Others: A 'Grown-Up' Handbook of Improvisation and Play'. The book, published in 2007, is the product of more than 20 years of experience in improvisational comedy. “After so many performances in so many places,” says McGehee, “I wanted to record everything I had learned about improv, and I wanted to pass on those lessons to the next generation of comics. Writing the book was my chance to do both.” "Les McGehee Plays Well With Others" has met with an enthusiastic response from readers, with Amazon.com customer Bowie V. Ibarra calling it “a must have for any aspiring improv comic performer.”The Austin resident soon found another opportunity to share the lessons of his career when Ann Ciccolella, then director of the Zachary Scott Theatre Center (ZACH), asked McGehee to adapt his book into a stage show. In the process of designing the show, McGehee was quickly able to recruit his friends and colleagues from the Austin improv community. “One of the best parts of making 'Plays Well With Others' was getting to work with so many people I knew from NCT and ComedySportz,” says McGehee. “It’s always more fun when you have your friends around you.”The San Antonio run of "Plays Well With Others" will be presented at The Overtime Theater, which has hosted the National Comedy Theater of San Antonio since March of this year. For McGehee, who appeared as a child on the San Antonio children’s show "Captain Gus" and started performing his comedy as a student at Smithson Valley High School (where he won state awards in drama), the decision to bring his show to the Alamo City was an easy one: “What I love about San Antonio is what I love about Austin. There’s such a strong improv scene in this city – not just professional troupes, but student companies as well, and they’re just as committed to putting on a great show as we are in Austin. San Antonio’s a great fit for NCT and for 'Plays Well With Others'.”The veteran performer, who has provided improv training to such Fortune 500 companies as AT&T, IBM, and Dell, believes that the lessons of his career can have an impact far beyond the stage. “‘Plays Well With Others’ was a category on my elementary school report cards,” says McGehee, explaining the title of his book and show, “and I believe it’s just as important for adults as for kids, maybe more so. An environment of people who can play, people who can laugh, people who can smile at one another, is a happier and healthier and more productive environment. If ‘grown-ups’ could remember how to play again, I really do think it would help the world become a better place.”"Plays Well With Others" will be performed at The Overtime Theater (1216 West Avenue, between Olmos and Hildebrand) from June 20 through July 12. Thursday, Friday and Saturday curtains are at 8:00 PM; however, there will be no performances on July 4 or July 11. Tickets for the show are only $9.00; Thursdays are “Roll the Dice” nights, when patrons can roll the dice and pay whatever amount they roll. For more information and to make reservations, please call 210.380.0326 or visit http://www.theovertimetheater.net.For more information on Les McGehee and "Plays Well With Others", please visit http://www.lesmcgehee.com.BACKGROUND: Les McGehee is a working comedian and improv pioneer who has entertained millions of people throughout the U.S., Mexico, Europe, and the Caribbean. He owns The National Comedy Theatre of Austin & San Antonio, and the largest improvisation training program in the South. His theatre in Austin is in its 16th year of professional comedy. Les has been featured on ABC, Fox Family and PBS, and toured with NCT’s “Tour for the Troops” in 2004-2005. His writing credits include many successful scripts, shows and published articles, and his book, "Les McGehee Plays Well With Others: A "Grown-Up" Handbook of Improvisation and Play", was published in 2007. A San Antonio native, Les currently lives in Austin, Texas.FOR MORE INFORMATION, PLEASE CONTACT: Nikki Young, Publicity, PrimaDonna Productions 8603 Crownhill Blvd., Suite 30 San Antonio, TX 78209 Ph#: 210.822-3552 * Fax: 210.822.3488 nikki@primadonnaproductions.comBackground of PrimaDonna Productions PrimaDonna Productions was formed almost a decade ago by Nikki Young and Chadd Green, both alumni of Southwest Texas State University. With rich backgrounds in the arts, Nikki and Chadd decided to help out local artists and theatres with their marketing and publicity. The firm’s services range from résumé designs for actors to entire marketing campaigns for playwrights. Other services include website design, logo creations, direct mailings, and more. Additionally, PrimaDonna Productions has also made a lasting impression with their film and video production work. For more information, please visit www.primadonnaproductions.com or call 210.822.3552.

09-12-2008 | Health & Medicine
PrimaDonna Productions
Health And Fitness Events Postponed Due To Weather
SAN ANTONIO – The onset of Hurricane Ike and its impending threat to the Gulf Coast, including the heavy winds and rains that are expected to affect over 80 counties (including Bexar), have forced the postponement of two major local fitness events. BOOT CAMP: THE FITNESS CHALLENGE and an H-E-B HEALTH AND FITNESS FAIR – both sponsored by H-E-B and All Sports Speed and Conditioning – were scheduled to take
09-05-2008 | Arts & Culture
PrimaDonna Productions
"Scene From Both Sides": Write It, Shoot It, Edit, Screen It
San Antonio-based multimedia marketing firm PrimaDonna Productions, Inc. introduces actors to the process of filmmaking with its newest class, SCENE FROM BOTH SIDES: THE INDEPENDENT FILM EXPERIENCE. WHEN: Saturdays, November 1, 8, 15, and 22 10AM – 5PM WHERE: PrimaDonna Productions - 8603 Crownhill Blvd. (near the Magic Time Machine) DETAILS: SCENE FROM BOTH SIDES: THE INDEPENDENT FILM EXPERIENCE is a four-week class for actors of all ages and levels of skill and experience, from the untrained
09-01-2008 | Arts & Culture
PrimaDonna Productions
The Tim And Bob Show Takes New Music "Outside" To Casbeers
SAN ANTONIO – The Tim and Bob Show – acclaimed by fans as “absolutely amazing” – is celebrating the release of its first CD, "Take It Outside", with a special performance on Saturday, October 18 at the new Casbeers at the Church. Although the band has been performing professionally since 2005, The Tim and Bob Show’s origins date back to 1999, when STEVE AND KATHY FEINSTEIN first met DON AND
09-01-2008 | Arts & Culture
PrimaDonna Productions
Laura Marie Is Off To A Running Start
SAN ANTONIO – As a singer/songwriter and a proud mother of two, Laura Marie understands the importance of staying healthy for her family and for her career. Now, as she prepares to run in San Antonio’s inaugural Rock ‘n’ Roll Marathon, she hopes her example will help inspire others to set health goals for themselves. “Just because you’re a busy mom, or a working musician, or even both, it doesn’t