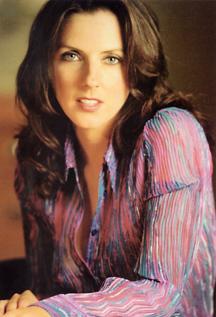 Regarding working on 'Green River' Kristina notes that it was a "liberating experience" - one that enabled her to create dynamic character traits lined with a disturbing undertone of inner-turmoil.

Premiere Invite
Press and other media outlets are cordially invited to attend the premiere. Please be sure to RSVP for this event by May 5th to ensure your passes.
Click here to view the trailer and RSVP...

Interview Requests
Kristina Hughes has returned to Los Angeles after shooting scenes on location in New York City for her latest film role in 'Helicon', and is now accepting interview requests to discuss her pivotal role in 'Green River'. Online, print, radio and television media are welcome.
Please contact publicity@KristinaHughes.com to schedule an interview.

'Green River' is a psychological thriller about a woman seeking closure with her sister's disappearance. Charisma Kavanagh and her friend Allison Chase return to Green River, the last known whereabouts of Charisma's sister. They encounter Jack Walker, a mysterious local man who arouses suspicion in Allison. As Allison becomes increasingly paranoid and dangerous, Charisma is forced to choose between trusting her life with her friend or a stranger.

About Kristina Hughes
Kristina Hughes, a New England native and a firm believer that through hard work and perseverance one's acting career can flourish to "expected heights" while unveiling "unexpected roles".

Soon after she made her way to NYC and Florida to train, audition and work as an actor on the sets of 'Thunder in Paradise', 'DropZone', 'Central Park West' and on stage in 'Pomp, Duck and Circumstance'. Shortly thereafter, Ms. Hughes experienced the thrill of competing in the world-renowned 'Miss USA Pageant' as the proud representative of 'The Constitution State'- embracing the coveted role of 'Miss Connecticut USA'.

With the intent of making acting her career, she re-located to Los Angeles. Since the big move she has appeared on 'Boston Legal', 'NYPD Blue', 'Old School', 'Unwrapped', 'Days of Our Lives', 'Party of Five' --- has been cast in several independent films, numerous short films, industrials and national commercials.

You can edit or delete your press release Kristina Hughes Lead Role in Green River World Premeire on May 8th in Hollywood. Media Requests Availalbe here