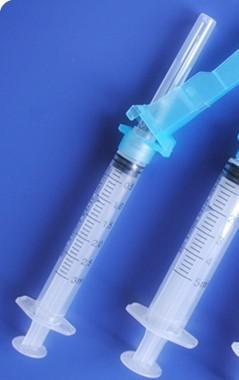 Since 2000, the global market for syringes is witnessing considerable growth in the usage of safety syringes over conventional syringes. This growth is mainly attributed to increasing concerns regarding needlestick injuries and infections coupled with governmental legislation ensuring the usage of safety syringes across the healthcare facilities. The global market for safety syringes was valued at USD 3,419.1 million in 2012 and is expected to reach USD 6,496.8 million by the end of 2019, growing at a CAGR of 9.7% during the forecast period from 2013 to 2019. Two major types of safety syringes available in the market consist of retractable safety syringes and non-retractable-safety syringes. In 2012, non-retractable safety syringes that include sheathing tube syringes, syringes with sliding needle covers and hinged needle covers accounted for the larger share in terms of revenue (USD Million) as well as volume (Million Units). However, during the forecast period, the market for retractable safety syringes is expected to grow at a higher CAGR than the non-retractable safety syringes due to increasing safety concerns and adoption in developed regions. The market for retractable safety syringes has been further segmented as automatic retractable safety syringes and manual retractable safety syringes. Automatic retractable safety syringes are more preferred than manual retractable syringes owing to advantage such as ease of use and enhanced safety.PDF Containing the Upcoming Market Analysis of Safety Syringes is available at: http://www.transparencymarketresearch.com/sample/sample.php?flag=B&rep_id=2079 The global market for safety syringes is primarily driven by factors such as increasing cases of needlestick injuries and their serious consequences, governmental legislation, overall growth in injectable drugs market and technical advances leading to syringes with improved safety features. According to the U.S. Occupational Safety and Health Administration (OSHA), approximately 5.6 million healthcare workers across the U.S. are high risk of exposure to blood borne diseases via needlestick and other sharp related injuries. The above mentioned fact indicates a favorable growth for safety syringes market. However, the market may face significant challenges from higher cost associated with the safety syringes and continuous development in alternative drug delivery methods. Safety syringes cost two to three times more than the traditional syringes that results in slow adoption rate of safety syringes across the healthcare facilities. This factor is more prominent across the developing nations where healthcare providers believe that the incidence of needlestick injuries can be prevented by providing training to healthcare workers and thus, avoids spending money on purchasing safety syringes. Geographically, North America was identified as the largest regional market for safety syringes in 2012 with majority share of the overall safety syringes market in terms of revenue as well as volume. The region is witnessing a paradigm shift in usage of safety syringes over conventional syringes. As the North American market is also witnessing a growing demand for prefilled syringes equipped with safety features, growing prefilled syringes market has also been anticipated to drive the market growth during the forecast period 2013 to 2019 in the North American region. Europe accounted for the second largest share in terms of revenue and volume both. In Asia-Pacific and Rest of the World (RoW), the market will grow due to ongoing immunization programs supported by the World Health Organization (WHO) and the United Nations Children's Fund (UNICEF), increased penetration by the U.S. and other western countries based companies and rise in awareness level regarding the serious consequences of unsafe injection practices.Read the Current Market Status of Safety Syringes at: http://www.transparencymarketresearch.com/retractable-safety-syringes-market.html Becton, Dickinson & Company, Covidien plc, Medical Smiths, Unilife Corporation, Retractable Technologies, Inc., Revolutions Medical Corporation and Terumo Corporation are some key players operating in the safety syringes market.Transparency Market Research (TMR) is a global market intelligence company, providing global business information reports and services. Our exclusive blend of quantitative forecasting and trends analysis provides forward-looking insight for thousands of decision makers. TMR’s experienced team of Analysts, Researchers, and Consultants, use proprietary data sources and various tools and techniques to gather and analyze information. Our data repository is continuously updated and revised by a team of research experts, so that it always reflects the latest trends and information. With a broad research and analysis capability, Transparency Market Research employs rigorous primary and secondary research techniques in developing distinctive data sets and research material for business reports.90 State Street, Suite 700 Albany, NY 12207 Tel: +1-518-618-1030 USA - Canada Toll Free: 866-552-3453 Email: sales@transparencymarketresearch.com Website: http://www.transparencymarketresearch.com/

06-11-2018 | IT, New Media & Software
qyreports
Mobile Safety Software
The rising popularity of mobile applications is one of the key factors responsible for the strong growth of this market during the forecast period of 2017 to 2021. It has been noted that mobile apps, such as WhatsApp, Snapchat, Facebook, YouTube, and Gmail, have gained popularity among the millennials since the past few years. Business applications, such as e-mail, calendars, and teleconferencing applications, are available for free and offer an
04-23-2018 | Business, Economy, Finances, B …
ReportsWeb
Airport Runway Safety System
Runway safety involves safe and reliable. Airport runway safety systems ensures safe and reliable flight operations from take-off to landing through providing guidance to ATCs and pilots. This is done by analyzing the detected data of runways and taxiways to take necessary steps in action while avoiding runway incursions, excursions, and confusions. Publisher's analysts forecast the global airport runway safety system market to grow at a CAGR of 8.53% during the
02-16-2017 | Industry, Real Estate & Constr …
TMR Research
Road Safety Market
Numerous systems, devices, and technologies are leveraged to ensure safety on highways, bridges, tunnels, and urban roads. Together they constitute the global road safety market, which at present is characterized by the presence of many players both from the private and public sectors. As a result, the competitive landscape is fragmented. Depending upon the different solutions for road safety available, the global market can be classified into automatic license plate
11-14-2016 | Industry, Real Estate & Constr …
DEGUMA
Safety first
When working on machines, keeping employees safe is of the utmost importance. Certain regulations ensure machine safety. In Germany, for example, this is called the "Regulation regarding safety and health protection in using work equipment." In other countries, similar regulations are effective, according to which the potential hazards of a machine are regularly assessed and the necessary and appropriate safety measures are derived. Do your safety standards meet the requirements? And
05-13-2011 | Industry, Real Estate & Constr …
Capital Safety Australia
Capital Safety Australia
Fall protection for penetrations and openings in construction, civil and confined space applications! DBI-SALA, a Capital Safety brand solely dedicated to the fall protection market, has announced the launch of their NEW PenoGuard™ fall protection system. PenoGuard is a new and revolutionary safety device that dramatically increases the safety of workers around penetrations that are commonly seen in construction, civil works and confined space applications. Penoguard has numerous safety factors that
05-06-2011 | Business, Economy, Finances, B …
Blackrock
Safety of Australian ETFs
BlackRock’s (NYSE: BLK) exchange traded fund business, iShares, said today that Australia’s young exchange traded fund (ETF) market and stringent regulatory system are keeping Australia’s ETFs relatively simple and straightforward. There are 50 ETFs currently trading on the Australian Securities Exchange (ASX) – the majority are based on the traditional ETF structure of a fund of physical stocks, in comparison to more complex ETF structures such as derivatives-based, leveraged and inverse
Comments about openPR
We publish our press releases on openPR.de because we like people who are "open" - just like us.
Frank Obels, CEO, INCONET - Informationssysteme, Communication und Netzwerkberatung GmbH