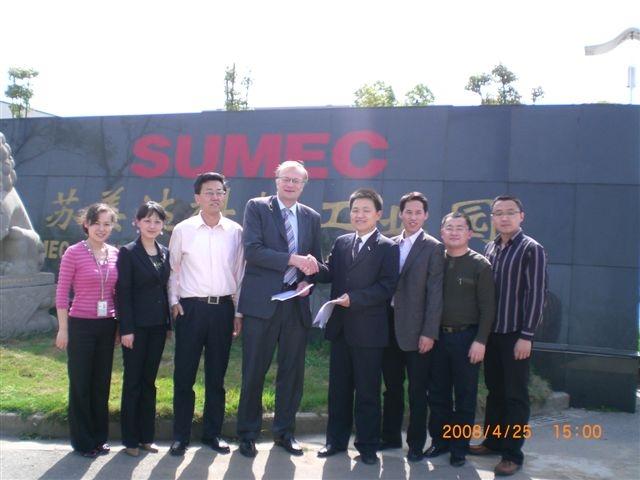 On 25.04.08 Solar*Tec´s CEO signed a joint venture Agreement on in Nanjing to establish PHONO SOLAR TECHNOLOGY CO. LTD in Nanjing in the Chinese province of Jiangsu. The joint venture aims at the production of solar modules. Due to the long period of approval by the Chinese authorities the buildings and the production installations have already been completed. The production is to start on 10.05.2008. The production capacity in 2008 is initially planned at 4 MWp monthly. From 2009 on an extension to an annual capacity of up to 100 MWp is scheduled. The production manager of the new company has worked many years in a similar position for one of the Chinese market leaders. Partner is the renowned Sumec corporation possessing valuable experience in the field of production of electronic and hight-tech-components. A trustfully cooperation with Solar*Tec exists since the beginning of 2007. A further jv partner is successful in the field of production of solar silicon and delivers the wafers. Another partner company then processes the wafers into quality solar modules. Within PHONO SOLAR TECHNOLOGY CO. LTD Solar*Tec AG is responsible for Design, Quality Control and Distribution. It holds 27% of the shares and provides 2 Board Members. Our picture shows Dr. Erich W. Merkle with Managing Director Mr. Cai after contract signing at the entrance of the Hi-Tech Park in which the company is located. The 2. picture shows the production building (left), administration building (right). It is quite extraordinary for Chinese companies to have such a harmonic integration into the park areas also serving the employees for recreation. Solar*Tec AG Administration, Production, R&D Uhlandstr. 13, 85609 Aschheim near Munich Contact: Mr. Dr. Erich W. Merkle CEO / Vorstandsvorsitzender E-Mail: merkle@solartecag.de Executive Board (Chairman) Phone: +49 (89) 90774997-0 Fax: +49 (89) 90774997-69 Solar*Tec AG is a Munich based company of the photovolataic industry with offices in Spain, Greece, China and Singapore and develops and markets highly efficient solar energy systems. Solar*Tec is the only PV company active in all three generations: crystalline silicon, thin film and concentrator PV (CPV). The Solar*Tec group of companies covers all important steps of the solar energy value chain: wafer manufacturing, solar glass, development of components, module production and realization of power plant projects. One of Solar*Tec’s core competences is the Sol*Con™-concentrator technology, which provides cell-efficiency rates over 35% and significant cost savings compared to conventional solar modules. Sol*Con™ is a registered trademark of Solar*Tec AG. Web: http://www.solartecag.de

06-02-2009 | Energy & Environment
SolarTec International AG
SolarTec International AG – Entry of investor finally determined
Aschheim, 20.05.2009 – Photovoltaics company SolarTec International AG is being bought out of the SolarTec group by an international investor. Following the agreement of the creditor´s meeting of SolarTec AG the takeover now has also found legal consent. After the insolvency of SolarTec AG by the End of 2008, the question about the future of the attractive core business-areas of PV-power-plants and concentrating-photovoltaics (CPV) was open. In February a Europe
02-06-2008 | Energy & Environment
SolarTec AG
Dr. Stefan Parhofer appointed as CFO of Solar*Tec AG
As of January 15th, 2008, Dr. Stefan Parhofer was appointed as CFO on the occasion of a meeting of the supervisory boad of Solar*Tec AG. He supports the Management Team (besides CEO Dr. Erich W. Merkle and CTO, Mr. Dipl.-Phys. Rainer Toelle) especially in the financial and organizational departments. Dr. rer. nat. Stefan Parhofer is 40 years old and has gained various, longtime professional experience in the field of young
12-14-2007 | Energy & Environment
SolarTec AG
Expansion of Supervisory Board of Solar*Tec AG
Munich, 27.11.2007 - On the occasion of an extraordinary shareholder´s meeting in Nov., 27th 2007 in the Notary´s Office of Predel and Dr. Goerk in Munich three further people were elected to join the Supervisory Board of Solar*Tec AG: * Dr. Marcus Fischer, Banker, Business Manager (Dipl.-Kfm.) * Andreas Müller, Commercial Executive (Kaufmann) * Andreas Tränkler, Auditor/Certified Accountant, Business Manager (Dipl.-Kfm.) Dr. Marcus Fischer (42). Joined Solar*Tec AG on October 4th, 2007 as Finance
11-27-2007 | Energy & Environment
SolarTec AG
Market entry in Greece - Solar*Tec Hellas A. E. established
Munich, 27.11.2007 - Munich based solar corporation Solar*Tec AG expands its international network by establishing two affiliates in Greece. Since Greece introduced in 2006 a Feed-In-Tariff comparable to the German Renewable Energies Act it has become highly attractive to PV-Companies, as the reimbursements rates range from 0.403 to 0.503 € per kWh. The Greek Government has approved PV installations with a total power of 1,889 MWp for the years 2007 to