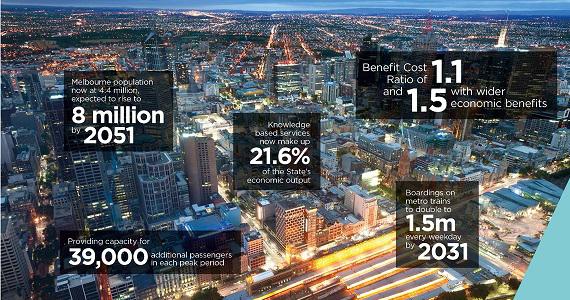 The Australian economy will see direct benefits from a major infrastructure project currently underway in Melbourne in the form of the $10.9 billion Melbourne Metro Rail Tunnel, says Infrastructure Australia.
According to Infrastructure Australia, every dollar invested in the Melbourne Metro Rail Tunnel Project will yield a return of approximately $1.50, taking into consideration wider economic benefits.
The Melbourne Metro Tunnel development will see the construction of two nine kilometre underground rail lines linking South Yarra to Kensington with five new underground stations. The project is expected to be completed by 2026.
Work has recently started in the CBD in preparation for major construction, seeing the closing of Franklin Street as well as A’Beckett Street. The new station will be located at the corner of Swanston and La Trobe streets and will be liked to Melbourne Central Station.
Catering for Melbourne’s expected exponential population growth, as the fastest growing state in Australia, the project aims to ease pressure on the City Loop and increase train services.
Public transport users are the direct beneficiaries of the grand scale project, with road users also set to benefit through a decreased reliance on cars.
With a growing population in Australia’s capital cities, now more than ever metropolitan cities are in dire need of public transport services that will accommodate a high-capacity as well as a high frequency of users who need to travel between work and home.
Appearing at the 9th Annual Victorian Transport Infrastructure Conference 2017, Melbourne Metro Rail Authority Chief Executive Officer Evan Tattersall will present project updates and timelines for the significant new project.
Other projects in the works for the state’s capital city include rail upgrades to Melbourne's North which will see the State Government allocate over $588 million to the Mernda Rail Extension Project and $140 million to the Hurstbridge line duplication. These upgrades will boost train frequency and reliability, catering to significant population growth in Melbourne’s North. VicTrack Chief Executive Campbell Rose addresses the rail improvements at the Victorian Transport Infrastructure Conference.
Centre for Urban Research, RMIT University Senior Research Fellow, Dr Crystal Legacy will present an overview and case studies of strategic transport planning to combat Melbourne’s urban sprawl. The new plan seeks to rectify car dependence as well as looking at broader environmental and social challenges.
Victorian Transport Infrastructure Conference will also host expert panellists to discuss reducing Melbourne's congestion, evolving transport technologies, a proposed congestion tax and the future of cooperative intelligent transport system implementation.
The 9th Annual Victorian Transport Infrastructure Conference 2017 convenes on the 21st and 22nd of March 2017 at the Melbourne Convention and Exhibition Centre.

Expotrade is a global conference and event organizer with its head office based in Melbourne, Australia. Expotrade has delivered some of the largest, most successful B2B industry conferences and events in the areas of infrastructure, major projects, sustainability, technology & architecture. For almost 10 years, our unique blend of knowledge, experience and flexibility has accomplished an array of consistently top quality events. Today, Expotrade events enjoy such a distinctive edge, they are amongst the best patronised in the calendar.
For more information, visit www.expotradeglobal.com