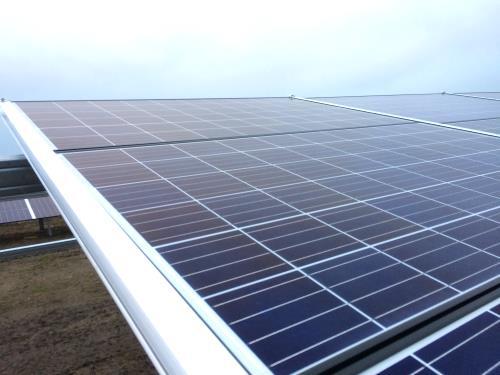 Ellzee, 24.01.2017. Right at the end of the year the SolarMax Group realised a 10-MW reference project, marking a successful conclusion to the 2016 business year. The project developer - actensys GmbH – deployed 24 SolarMax TS-SV 360 central inverters at the Körbelitz II PV farm in the Jerichower Land, Saxony-Anhalt. The solar farm has been ready for operation since 31 December 2016, and will be commissioned on schedule when the grid connection is completed in May of this year.First use of the SolarMax TS-SV 360Körbelitz II is the first deployment of the SolarMax TS-SV 360 central inverter. SolarMax designed the 360-kV device especially for large-scale photovoltaic installations. “We developed the SolarMax TS-SV 360 specially for projects like Körbelitz II, because it maximises the yield of larger photovoltaic installations”, says Pierre Kraus, managing director of SolarMax Sales and Service GmbH. The TS-SV central inverters use high-grade film capacitors. Thanks to the intelligent monitoring of the power semiconductors, the inverters are particularly durable and dependable. The integrated data loggers store yields, peak performances and hours of operation for up to ten years. The inverters can be integrated into the MaxComm communication system via RS485 or Ethernet interfaces. The TS-SV 360 has a Euro efficiency of 97% and an MPP efficiency of 99.9%.The inverters can be easily disconnected from the PV generator and the grid by means of AC and DC circuit breakers that are accessible from outside. The TS-SV inverters of course conform to the medium-voltage directive and can actively support the grid with reactive power or remain on grid with brief power outages.Demand for storage solutions will increase in 2017 actensys GmbH is also using SolarMax inverters for the Neuenbrook II PV farm in Steinburg, Schleswig-Holstein. The 7.6-MW solar farm will also be equipped with SolarMax TS-SV 360 inverters. This project is however just one of the reasons why Kraus is looking forward to the new business year with such optimism. “2017 is the first year that the feed-in remuneration will not be reduced again, and this will stabilise the market,” predicts Kraus. Kraus expects further boosts for business development from the roof-based market, especially in combination with storage units. “Domestic consumption of solar power is becoming increasingly more lucrative – not least because the KfW subsidies for battery storage units are being reactivated in 2017 “, he says. “Thanks to this we are expecting a boost for our MaxStorage units that we will be launching with a roadshow in 2017.”The SolarMax Group was established in June 2015 in Ellzee, Bavaria. The company develops, manufactures and sells string and central inverters for grid-connected solar power systems, accessories, and plant monitoring solutions. The principal shareholder is the RenerVest Group, based in Waldstetten, Bavaria. The investment company has ten years experience in the renewable energy sector. In addition to the brand rights and production equipment, the company also took over the stock and Internet portal from the insolvent Sputnik Engineering AG, as well as the service centre in Annaberg-Buchholz (Saxony).Krampitz Communications - PR for Renewables and Technologies Iris Krampitz / Thomas Blumenhoven Dillenburger Str. 85 D-51105 Köln Tel: +49 (0) 221 912499 49 Fax: +49 (0) 221 912499 48 eMail: presse@solarmax.com www.pr-krampitz.de

05-04-2017 | Energy & Environment
SolarMax
SolarMax launches modular storage system solution
Ellzee, 04.05.2017. In July 2017, inverter manufacturer SolarMax starts shipping its modular complete storage system MaxStorage TP-S, developed primarily for private applications. Since the product was first presented at Intersolar Europe 2016, the company has incorporated several improvements suggested by its customers before this market launch. The three-phase system solution unites a lithium-ion storage battery, a self-learning energy management system and a seven-kilowatt SolarMax 7TP2 inverter in one housing. Thanks to
03-20-2017 | Energy & Environment
SolarMax
Free project extension: SolarMax now offers its three-phase string inverters wit …
Ellzee, 20.03.2017. With immediate effect the SolarMax Group is offering its 6 to 32 kilowatt three-phase string inverters with free additional features. With every order for MT and HT series inverters the group is gifting its customers one MaxWeb XPN data logger per photovoltaic system. The data logger has been on the market since autumn 2016 and acts as the remote monitoring hub, recording current measurements, yield data and events.
10-27-2016 | Energy & Environment
SolarMax
New guarantee option for SolarMax inverters: the manufacturer-independent warran …
Ellzee. As of this October 2016, and in cooperation with warranty service provider COVERIS AG, the SolarMax Group is offering a manufacturer-independent warranty extension for their inverters. COVERIS Extended Warranty plus is the new function warranty that customers can conclude for SolarMax P, TP, MT and HT series string inverters. Prerequisite is that the devices were supplied by SolarMax after 31 March 2016 and first put into service after 30
05-23-2016 | Energy & Environment
SolarMax
Special promotion for Intersolar Europe: SolarMax Group extends guarantee for TP …
Ellzee. As part of a one-off special promotion to coincide with Intersolar Europe, the SolarMax Group is doubling the guarantee for its TP Series three-phase inverters from five to ten years. The free guarantee extension applies to orders made between 17 May and 17 August 2016. With this promotion SolarMax is emphasising the quality of the devices it manufactures. The TP Series is especially suitable for private solar plants and