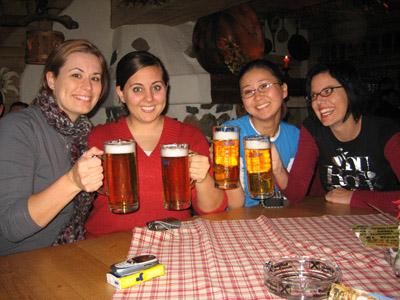 Raising Steins of Beer at Oktoberfest

Kalamunda, Australia - April 8, 2008 – Parties and pubs may make for common bedfellows, but when Australia’s Thirsty Swagman touring company (WorldsBiggestPubCrawl.com) plans a European pub crawl, they shake things up a bit. This year, during Oktoberfest, Thirsty Swagman will be offering an “adventure drinking” excursion for party-hungry travellers with Europe’s longest pub crawl. The multi-country pub crawl will kick off in the beer tents of Oktoberfest 2008, and offers travellers an 11-night party across Europe. Members of the tour group will pay a visit to Munich, Maria Alm in Austria, Prague, and Dusseldorf (home of the world’s longest bar). “This concept of combining international travel with pub crawling as never been offered before,” said Kenneth Hart, founder of Thirsty Swagman Pty Ltd. “This is a unique way to see some interesting places in Europe while having fun and meeting real locals at every destination.” The record-breaking alternative travel outing as been dubbed the “Euro Hard ‘n’ Fast” tour. The adventure drinking tour is accepting only 24 people, and is a practical travel option for solo travellers or even a small group of friends. “Every place we visit is unique,” says Karen Logan, Media and Online Manager at Thirsty Swagman. “For example, in Dusseldorf visitors can drink at more than 350 pubs and bars within a single city block. We’ll be taking our tour group there on Germany’s re-unification day when they can meet a lot of locals and other travellers, as over 100,000 people can pack those pubs that night.” The Euro Hard ‘n’ Fast tour includes all transport from Munich through the end of the trip, 3-star twin-share accommodations (including breakfast), entry to beer tents, pubs and bars with discount drinks available at some, video production, t-shirts, and a bilingual party / tour guide. The price in Australian dollars is $2990 per traveller. Note: High-resolution artwork, photos and posters are available upon request. ### Thirsty Swagman Pty Ltd Suite 4 / 4 Canning Rd Kalamunda WA 6076 Australia Phone: +61 8 9257 3898 Email: press@thirstyswagman.com Web: www.worldsbiggestpubcrawl.com Presscontact: Kenneth Hart Thirsty Swagman was launched in April 2007 to provide an alternative to the usual sight-seeing and experience tours. All trips by the company offer a purely pub- and bar-based itinerary, usually taking in the local nightlife and covering multiple countries. For more information about Thirsty Swagman please visit www.WorldsBiggestPubCrawl.com

11-15-2011 | Tourism, Cars, Traffic
Thirsty Swagman Pty Ltd
Full Moon Party Thailand Tours set for 2012
With the number of people frequenting Full Moon Parties in Thailand on a steep rise, Australian-based tour operator, Thirsty Swagman (http://www.asiapubtour.com), gives some tips and advice for those travelling to Koh Phangan’s renowned beaches. Full moon parties in Thailand are becoming all the rage with thousands of travellers from around the globe flocking to Thailand for the monthly ritual. Set on crescent-shaped beach, Haad Rin - one of Thailand’s most scenically
02-03-2009 | Tourism, Cars, Traffic
Thirsty Swagman Pty Ltd
World’s Top 80 Bars to Feature in Pub Crawls around the World
A variety of pub crawl adventures, organised by Australian touring company Thirsty Swagman (thirstyswagman.com), will include a selection of the official World’s Top 80 Bars as featured in Australia’s most popular men’s magazine. Perth, Australia – February 5, 2009 – Travellers looking to quench their thirst at the world’s finest pubs need to look no further than a party tour offered by Australia’s Thirsty Swagman touring company (www.ThirstySwagman.com). The company’s
10-30-2008 | Tourism, Cars, Traffic
Thirsty Swagman Pty Ltd
Record Beer Consumption at Oktoberfest '08
Munich, Germany - October 30, 2008 - Visitors to the 2008 Munich Oktoberfest did their best to live up to the festival’s proud traditions by guzzling 6.6 million litres of beer in 15 days of all-out drinking. 6.6 Million Litres of Beer, 104 Oxen, and one Koala bear. In fact, statistics for Oktoberfest are downright entertaining. Each year after the two-week celebration of beer and Lederhosen ends, the city of Munich

09-24-2018 | Media & Telecommunications
Evops Marketing & PR
Celebrate Oktoberfest at Biggles in Millennium Airport Hotel Dubai
It will soon be celebration time at the Biggles Pub in the Millennium Airport Hotel Dubai as the Oktoberfest party kicks off at the outlet. The annual fiesta will run at Biggles from 25th September to 4th October 2018 and will offer revellers the opportunity to enjoy traditional German brews along with a superb selection of specialties. Mr. Simon Moore, General Manager of Millennium Airport Hotel Dubai, said, “We are
09-20-2013 | Leisure, Entertainment, Miscel …
Camp Pa-Qua-Tuck
Moriches Rotary Club Hosts Oktoberfest
(Center Moriches, NY) — The Rotary Club of the Moriches is hosting its annual Oktoberfest on September 27-29 at Camp Pa-Qua-Tuck, located on Chet Swezey Road. The times for Oktoberfest are as follows: September 27, 6 p.m. to 11 p.m. September 28, noon to 11 p.m. September 29, noon to 9 p.m. The three-day event will include German food, beer gardens, a carnival, vendors, live German entertainment and more. Admission is
09-12-2012 | Arts & Culture
The Beehive
Oktoberfest Der Beehive
Celebrate Oktoberfest with Live Music, Food & Beer at The Beehive! WHAT: On Wednesday, September 26th, 2012, join The Beehive for “Oktoberfest Der Beehive,” an evening highlighting rustic German food and libations, as well as entertainment by the Oktoberfest German Band. Revel in official Oktoberfest festivities with The Beehive as Harpoon Brewery rolls out the barrel to have a
08-24-2011 | Leisure, Entertainment, Miscel …
One Concierge
One Concierge Provides VIP Oktoberfest Experience
Oktoberfest, a 16–18 day festival held annually in Munich, Bavaria, Germany, is one of the most well-known festivals in the world, attracting more than 5 million people every year having been held since 1810. One Concierge (www.oneconcierge.com), a global concierge and lifestyle management firm, today announced a complete VIP Oktoberfest Experience in Munich, Germany for this year’s festival. The new offering will allow clients who wish to attend Oktoberfest
11-01-2010 | Tourism, Cars, Traffic
Thirsty Swagman
Oktoberfest 2010 Beer Consumption Highest in History
Munich, Germany – November 1, 2010 – All that attended Oktoberfest this year will be happy to know that they have drank their way into the history books, as this year’s beer consumption hit a new record of a staggering 7 million Litres. Visitor numbers were quite a bit higher than last year, moving from 5.7 million to 6.4 million, with almost 600,000 people celebrating Oktoberfest on one Saturday
09-16-2010 | Arts & Culture
Polycreative
'Oktoberfest Tampa' celebrates 200 YR anniversary of Oktoberfest along the Tampa …
Oktoberfest Tampa is celebrating the 200 year anniversary of a traditional German celebration that takes place annually in Munich, Germany. More info is available at: www.OktoberfestTampa.com This year Oktoberfest Tampa will be hosted at the premier waterfront location of The Heights Tampa, and will include Tampa’s largest Beer Hall with a wide variety of cold beers on tap! The Beer Hall will be decorated with themes of famous beer tents
Comments about openPR
OpenPR ist the nicest and most clearly laid out PR platform I have seen to this day. The press releases are displayed very nicely and clearly and without any unnecessary frills. The updates are fast and the finished release looks appealing and is clearly legible. Even with 16 years of experience one discovers new things from time to time. Congratulations!
Gabriele Ketterl, Director Marketing & PR, Menads