Titan: Pluto's big brother - The Cassini-Huygens spacecraft and the darkest moon of Saturn 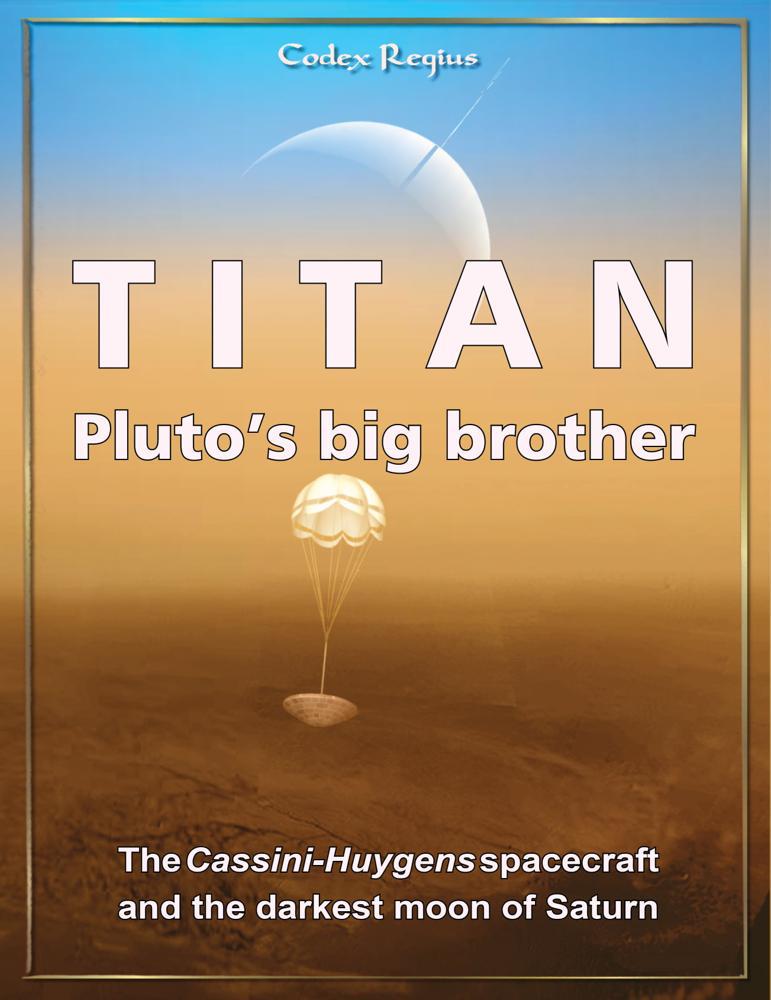 Codex Regius, with a foreword by Dr Rainer Riemann December 2016 £15.70 | $20.50 | 150 pages | 1541307453 978-1541307452 ‘I can still exactly recall that 14 January 2005 when I was waiting in ESA’s control centre for the first images and measured data. The Cassini Orbiter made even more fascinating discoveries during those twelve years after the landing, and it is these that this book informs us about.‘ —Dr Rainer Riemann, astrophysicist, Heidelberg, GermanyMars is not the world that would be suited best for human settlement. That is - despite its huge distance from Earth - Saturn’s moon Titan which, today, looks to us like a big brother of Pluto. That which the doomed Cassini-Huygens spacecraft has shown us is a world that looks homely to human eyes and yet immeasurably alien. Including a foreword by Dr Rainer Riemann, active contributor to the Cassini-Huygens mission. Following their successful Pluto & Charon – The New Horizons spacecraft at the farthest worldly shores from June 2016, Codex Regius are continuing their series on lesser worlds in the solar system with Titan: Pluto's big brother – The Cassini-Huygens spacecraft and the darkest moon of Saturn about another world currently explored by NASA spacecraft. Saturn's largest moon Titan bears in fact so much resemblance to a larger and milder Pluto that the authors advocate categorising both worlds in a common class, despite one of them orbiting a larger body (Saturn, and the other, a smaller one (Charon). Following the layout and structure of the previous Pluto & Charon volume, Titan: Pluto's big brother begins with an overview of the world discussed as NASA's space probe approaches it, continues with a summary of the descent of the Huygens lander and a brief retrospective of early Earth- and space-based observations. The next three chapters are dedicated to the surface with prominent landmarks described in more detail, the chemistry of the ground and the atmosphere and the weather and climate patterns. A discussion of Titan as a potential host of native lifeforms (whether on the surface or deep under its icy crust) follows, and the concluding chapter presents a few proposals of follow-up missions to Cassini that will meet a fiery end in September 2017. The book aims at amateurs and armchair astronomers with a bit of background knowledge in natural sciences and the solar system, and it is illustrated both with original NASA/ESA images and illustrations produced by the authors.'We have learned a lot about Titan since Huygens landed in 2005,' say Codex Regius, 'most of it, however, is hidden way in profound but unaffordable textbooks with only a few tantalising glimpses available online. Below the professional level, there opens a huge gap on the market that we have tried to fill with this book like with the previous volume on Pluto and the New Horizons mission.'Codex Regius is the pen name and label of two authors: Andreas Möhn from Wiesbaden, Germany, and Metka Klemenčič from Ljubljana, Slovenia. Metka is a university engineer of chemistry and has spent her time trying to convey the wonders of the Periodic Table to mostly unreceptive students, she is particularly interested in the chemistry of other worlds and their compositions. Andreas, a graduate of physical engineering, has worked as a technical editor before Codex Regius set up a freelance translation business and their own publishing company. Both of them are also long-term members of the Urania astronomy club of Wiesbaden, Germany, and frequently presenting results from latest research in the solar system to interested audiences. Dr Rainer Riemann is astrophysicist based in Heidelberg, Germany, and was actively involved in the conception of the Cassini-Huygens mission and in the LunarSat proposal (http://adsabs.harvard.edu/abs/1998LPI....29.1868E ). He is also an occasional contributor to magazines like 'Sterne und Weltraum', 'Astronomie heute' and member of the Urania astronomy club of Wiesbaden, Germany.Andreas Möhn & Metka Klemenčič Mühlborngasse 1 D-65199 Wiesbaden Germany info@codex-regius.eu https://codex-regius.eu

You can edit or delete your press release Titan: Pluto's big brother - The Cassini-Huygens spacecraft and the darkest moon of Saturn here

09-12-2018 | Business, Economy, Finances, B …
Market Prognosis
Safety Programmable Controller Global Market Size, Latest Innovations and Leadin …
The global safety programmable controller market was valued at USD 5.69 billion in 2017 and is expected to reach a market value of USD 8.31 billion by 2023, registering a CAGR of 6.45% during 2018-2023. Safety PLCs are going to be used in a variety of industries where the need for automation is rising. In the near future, as more industries move toward automation, PLCs are going to be used
06-26-2018 | Business, Economy, Finances, B …
The Machine Maker
Sky is the limit for Drona Aviation-Prasanna Shevare, Apurva Godbole, Dinesh Sai …
For three bright IITians sky was the limit of success in their individual career; they together instead have made limitless success in the sky. Shunning off big corporate dreams and lucrative careers, three IIT graduates joined hands to build Drona Aviation, a Mumbai based startup that is exploring the possibilities with drones in India. Of its three founders namely, Prasanna, Apurva, and Dinesh, Prasanna is a Ph.D. student of IIT Mumbai,
08-24-2011 | IT, New Media & Software
Certeon
Pluto Networks Joins Certeon’s Industry-Leading Partner Program, Solves Intern …
BURLINGTON, Mass. – August 23, 2011: Certeon, the application performance company, today announced a reseller partnership with Pluto Networks, a worldwide leader in emerging technologies specializing in WAN acceleration, security, networking, voice and video. By adding Certeon’s WAN acceleration solution, aCelera, to its product portfolio, Pluto Networks is able to enhance its WAN offerings for businesses that require global application acceleration deployments due to the flexibility of the Certeon aCelera
05-05-2011 | Fashion, Lifestyle, Trends
PianoPianoForte.com
The Sound of the Earth and the Planets in the New Album of Giorgio Costantini
Italian arranger, composer, and producer Giorgio Costantini, who’s 2009 indie album “PianoPianoForte” reached number seven on Italy’s iTunes charts, has announced the release of his latest CD “Universound”. Rome, Italy, May 05, 2011 -- Italian arranger, composer, and producer Giorgio Costantini, who’s 2009 indie album “PianoPianoForte” reached number seven on Italy’s iTunes charts, has announced the release of his latest CD “Universound”. Giorgio Costantini is well known for his unique and
05-21-2010 | IT, New Media & Software
Information Retrieval Facility
PLuTO: Why overcoming language barriers fosters a more innovative society.
European consortium formed to improve access to multilingual patent digital libraries. Entering a new market is a costly endeavour for individual inventors and SMEs. Searches must be made for any existing patents in the domain and this requires high-level technical and legal expertise. Language barriers represent an additional hurdle, because of the specific language in patents: both technical and legal at the same time. The multi-national distribution of patent sources
11-15-2007 | Fashion, Lifestyle, Trends
Questico GB Ltd.
Questico wishes Prince Charles a very Happy Birthday and presents him with his o …
Happy Birthday! - His Royal Highness Prince Charles Philip Arthur George, Knight of the Garter, Knight of the Order of the Thistle, Knight Grand Cross of the Order of the Bath, Privy Councillor, Prince of Wales and Earl of Chester, Duke of Cornwall and Rothesay, Earl of Carrick and Baron of Renfrew, Lord of the Isles and Prince and Great Steward of Scotland. Questico UK offers our congratulations! Questico astrologers have
Comments about openPR
I can't but agree to the positive statements about your portal: easy to use, clear layout, very good search function, and quick editing!
Jens O'Brien, Borgmeier Media Communication