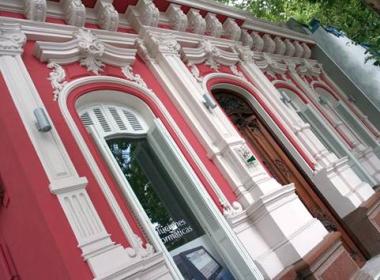 Facade of the ICG Software headquarters in Montevideo (Uruguay). The building was built in 1911 and has been rehabilitated by ICG.

Responding to the need to increment our international expansion, the ICG Software group will open an own office in the Oriental Republic of Uruguay, in order to foster the strong growth of business in the Southern Cone.The opening ceremony, to be held on March 25 at the facilities of ICG Uruguay in Montevideo, will be chaired by His Excellency mr. Daniel Martínez, Minister of Industry, Energy and Mining of the Oriental Republic of Uruguay. Also present at this event, among other authorities, are the Municipal Mayor of Montevideo, Ricardo Ehlrich, the Undersecretary of the Ministry of Industry, Gerardo Gadea, the Adjunct Consul General of Spain, Antonio Ruiz de Casas, representatives of the Chambers of Commerce, Industry and Information Technology and our president of ICG Software, Andreu Pi.With this new inversion we respond to the need to develop our future plans in the South American countries, and to establish, a decade after our arrival in this Latin American country, an own delegation in Uruguay, while we join the interests of the Government of Uruguay to advance the technological and economical development of the area.On the other hand, in the spirit once again engage us in social and cultural projects, the new headquarters of ICG Uruguay in a landmark building of historical interest for the city of Montevideo, which we have restored to preserve the national heritage of the country.The building, which was built in 1911 and which is invaluable because of its details of the time, has historicist architecture, designed for new montevidean residences in the late nineteenth and early twentieth century. This style is evident in the new headquarters of ICG Software in Art Nouveau, Classic and Romantic elements.ICG Software Partida Pla de Monsó, 54 25193 Lleida Spain Tel. +34-973 228540 international@icg.es http://www.ICG.esICG Software is a Spanish company which was founded in 1985 in Lleida. ICG creates innovative and complete business management solutions for the retail, hospitality and industry markets. Currently, the ICG software products have been translated into thirteen languages and contemplate the commercial and fiscal needs of more than thirty countries in Europe, America, Oceania and Asia. For further information, visit our web site at http://www.icg.es, mail us at international@icg.es or phone us at +34-973-228540

05-16-2008 | IT, New Media & Software
ICG
ICG is Microsoft "Gold Certified Partner"
The quality in manufacturing and marketing of solutions for the sectors Hospitality Industry, Commerce, Industry and Distribution, and Business Management, developed by the company ICG Software and the installation of SQL Server in the deployments the Group carried out in the 37 countries in the world where it distributes its products, led Microsoft to want to extend and strengthen the alliance partnership with the ICG group, as a continuation and
04-30-2008 | IT, New Media & Software
ICG
ICG Mexico holds a convention for partners and end-users
Aiming to strengthen its expansion across the country and to triple the turnover, ICG Mexico held a convention with various responsible of collaborating companies that are part of the current distribution channel of ICG products in the Latin American country. Another objective of the event, which counted on the presence of the manager of ICG Software Angel Madrona, was to incorporate new partners in the structure of its distribution channel to
04-22-2008 | IT, New Media & Software
ICG
Balearia - one year of success with ICG solutions
The Balearia group, the leading shipping company operating in the Mediterranean, will introduce new ICG solutions after closing a year of great business successes where all its ferries were computerized with the technological applications from ICG Software. The implementation was carried out by SIGMA SL, our Master Provider in Alicante, in response to the needs demanded by the company, and allowed Balearia to know the production by boat and line thanks
03-19-2008 | IT, New Media & Software
ICG
ICG was present at the CeBIT 2008 show
With the objective to continue our presence at international events as a quality guarantee. One more year ICG was present with our own booth at CeBIT 2008, one of the most important new technology shows in Europe, organized in the German city of Hanover from 4 to 9 of March. One of our main objectives of this edition of the CeBIT was to promote our specialized technology solutions for the management