Press release from: The Associates of the California Institute of Technology 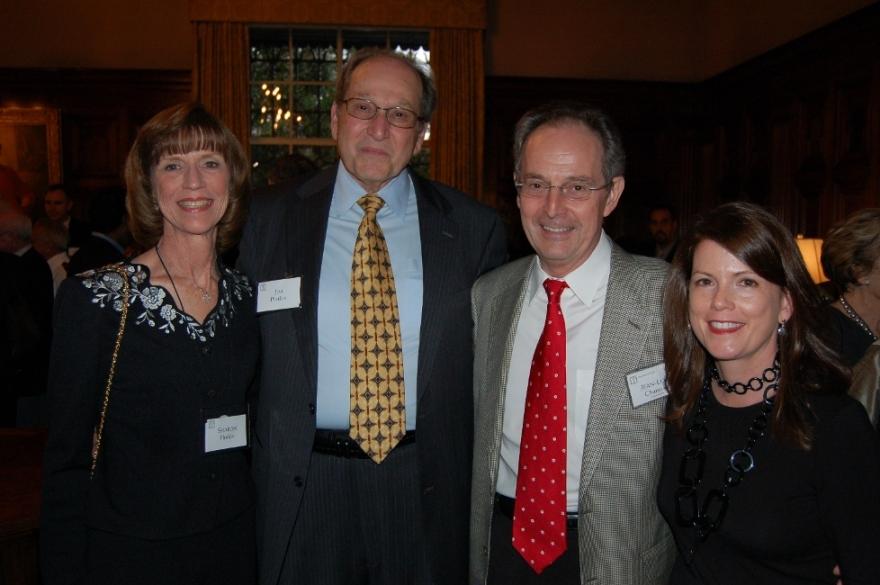 Pasadena, Calif.—Margaret Mead once said, “Never doubt that a small group of thoughtful, committed citizens can change the world. Indeed, it is the only thing that ever has.” This is a quote that President Jean-Lou Chameau uses to describe the California Institute of Technology (Caltech) and the Caltech Associates.At a dinner recognizing and welcoming the new members of the Associates, a support group for Caltech, 126 guests enjoyed a reception hosted by the Caltech Employees Federal Credit Union in the Athenaeum’s main lounge. During the 3-course dinner, Chameau introduced himself to the new members and described his feelings about the “tiny, jewel-like institution” known as Caltech.“We are small in terms of numbers of people: only about 900 undergraduates, 1,300 graduate students, and just under 300 professorial faculty,” said Chameau. “But in terms of the work we undertake—especially the things we’re really good at, like geoscience, astronomy and astrophysics, engineering, and space exploration—we are not small at all. In fact, our best programs are sometimes among the largest in the country.”Since the creation of Caltech in 1920, scientists, engineers and students have made great contributions to science. The Graduate Aeronautical Laboratories developed the principles that made jet flight possible, which resulted in the birth of JPL and the aerospace industry. Caltech’s scientists have created the scale for measuring the magnitude of earthquakes, discovered the nature of quasars, determined the nature of the chemical bond, and conducted the studies of bacterial viruses that led to a new branch of biology called molecular genetics. They also launched the modern biotech industry, which is built on the discoveries of the faculty in molecular biology, chemistry, and classical genetics.The future of science and discovery at Caltech was recently solidified by the conclusion of a five-year fundraising campaign called “There's only one. Caltech”. “The campaign’s goal was $1.4 billion, which we actually exceeded by about $25 million,” said Chameau. “This campaign has succeeded in funding some very important new ventures.”Over the past five years, Caltech has begun the construction on three new laboratories; The Cahill Center for Astronomy and Astrophysics, the Annenberg Center for Information Science and Technology; and the Schlinger Laboratory for Chemistry and Chemical Engineering. Over twenty laboratories have also been renovated with new equipment and technologies that can further the scientific research at Caltech.“Caltech is partnering with the University of California and the Association of Canadian Universities for Research in Astronomy to design and build the Thirty-Meter Telescope,” explained Chameau. “When it’s completed, it will be the largest telescope in the world, and will allow us to see farther into the universe than ever before.”All of the construction, renovation, and scientific research have been made possible by the generous donations of foundations, corporations, governmental grants, and individual donors with an interest in bettering the world through science, like the members of the Caltech Associates.Being recognized at the Caltech Associates new member dinner were the 118 new members and the friends who introduced them to the organization. These new members have supported Caltech by bringing in a total of $843,250 this year to help fund new and current research.“Among the strongest of our resources are our dedicated friends—a group that now includes all of you,” said Chameau. “I thank you most sincerely for joining the Caltech Associates, the Institute’s most venerable support group, and I hope to have the pleasure of meeting with you again in the future.”To learn more about the Caltech Associates, and how you can support Caltech’s future scientific achievements please visit http://associates.caltech.edu/ or contact at 626-395-3919.The Associates of the California Institute of Technology M/C 5-32 1200 E. California Blvd. Pasadena, CA 91125 Contact: Julia J. Cody (626) 395-2926 jcody@dar.caltech.edu http://associates.caltech.eduAbout the Associates: Founded in 1926, the Associates is a support organization for the California Institute of Technology (Caltech) with over 1,450 members throughout the United States and abroad - a diverse cross section of members of the local & business community, Caltech alumni and faculty, and philanthropists.

More Releases from The Associates of the California Institute of Technology