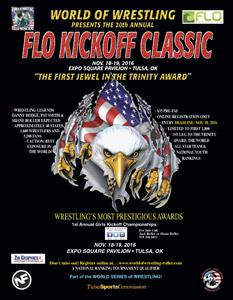 EZ Flex is proud to announce the extension of its partnership with World of Wrestling, promotor and director of some of the country's most prominant youth wrestling tournaments.As the official mat of World of Wrestling, EZ Flex will provide its high-performance lightweight wrestling mats to upcoming WoW tournaments like the Tulsa Nationals and Reno World Championships. These mats, in 42’ x 40’ and 30’ x 30’ sizes, will be made available at a highly discounted rate to schools and clubs in the surrounding areas, helping support the growth of youth wrestling."Our first year working with World of Wrestling in the 2015-2016 season was a great experience." said Ben Anderson, President of EZ Flex. "We're excited to be continuing our partnership with Jack Roller and World of Wrestling into 2017 and look forward to having EZ Flex represented at the country's greatest kids wrestling tournaments."World of Wrestling operates some of the top youth wrestling tournaments in the country, such as the Kickoff Classic, Tulsa Nationals, and the Reno Worlds, collectively known as the three legs of the “Trinity Award”. It was founded in 1998 by Jack Roller, a long-standing fixture in Oklahoma wrestling who is dedicated to “the Promotion of America’s Youth and the Great Sport of Wrestling." Visit their website at #worldofwrestling-roller for tournament details, registration, and more.EZ Flex Sport Mats is one of the country's leading manufacturers of mats for wrestling, cheerleading, gymnastics, fitness, martial arts, and more. Founded by industry veterans Jeff Anderson and and Gary Heartsfield in 2010, EZ Flex has experienced rapid growth and notoriety as a leader in quality, performance, and service. EZ Flex continues to strengthen its presence in the wrestling community each year, providing mats for 24 major tournaments and competitions in 17 states throughout the country for the 2016-2017 season.EZ Flex prides itself with high quality sports mats that are made in the USAVault Event Media Lisa Walker 7533 Forsyth Blvd., Clayton, MO 63105 314-261-4300 lisa@vaulteventmedia.com www.vaulteventmedia.com