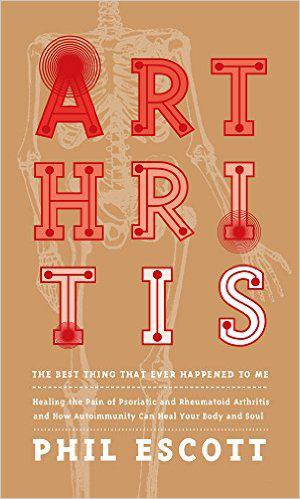 Breaking News - Phil Escott Self Cures Rheumatoid and Psoriatic Arthritis Pain with No Drugs - Read Amazon Kindle Bestseller Now Phil Escott Cures Own Arthritis Without Drugs or Doctors; His Book has Become a Hot Seller on Kindle Instantly 'Arthritis - The Best Thing That Ever Happened to Me' details Escott's saga to finding ultimate relief without medical intervention.November 4, 2016 -- Phil Escott, author of Arthritis – The Best Thing That Ever Happened to Me: Healing The Pain Of Psoriatic And Rheumatoid Arthritis And How Autoimmunity Can Heal Your Body And Soul, has written this story about his onset of symptoms, the despair and pain that followed, the frustrations with the doctors’ ineffective chemical approaches, and finally finding success through diet, lifestyle and emotional balancing. There are many laughs and a wealth of practical advice on subjects seldom touched upon in other books on arthritis such as ketosis, cold thermogenesis, circadian rhythms, rebuilding the gut flora and methods for untangling beliefs that create problems in the mind. Phil also delves into root causes – our certain life circumstances, which eventually manifests as disease as the body follows suit. It’s a tale of discovery, failures, successes, awakenings and ultimate surrender. Phil’s knees and ankles had blown up to the size of grapefruits. Inflammation in his spine and wrists had become so painful that it felt like he had broken glass throughout his body. Walking was excruciating. After three months with numerous doctors who did nothing for him, Phil took healing into his own hands. In desperation, Phil began doing weeks and weeks of research on Google, which led to many things that didn’t help and a few that did. And it was then that he started to realize that the real answer to curing comes from subtraction – one by one getting rid of the things that caused your arthritis in the first place and recognizing that only then will the body reset itself. There are more people suffering from arthritis and autoimmune diseases than cancer and heart disease in every country in the world. In the USA, one in five adults suffer from arthritis or 52.5 million people as well as 250,000 children. It’s estimated that by 2030, 67 million over the age of 18 will have arthritis in the USA. “Like us all, Phil ascribed to the precepts of what could bring him health, and he found that most of what he was told enriched others but just left him more broken. The medicine man’s chronic wallet biopsies did not bring him solace, but discomfort. Instead of viewing that stress as a misfortune, he used that discomfort to innovate a change in himself by changing his priorities. Any misfortune ‘that lies outside the sphere of choice’ should be considered an opportunity to strengthen our resolve, not an excuse to weaken it. How did he become stronger when he was weaker? He added ideas to his own recipe of experience to create brilliance.” -- Dr Jack Kruse, respected neurosurgeon and CEO of Optimal Life WebMD says that traditional doctors have no proof that the Paleo diet stops the symptoms of PsA but you could have less swelling because you’re not eating fatty foods and dairy products. In his research, Phil Escott found it one of the most important contributing factors - especially concerning inflammation. Phil Escott has been doing Skype consultations on arthritis and autoimmune diseases for several years. His appearance on Buddha at the Gas Pump on YouTube has almost 10,000 views.Arthritis – The Best Thing That Ever Happened to Me: Healing The Pain Of Psoriatic And Rheumatoid Arthritis And How Autoimmunity Can Heal Your Body And Soul is available for purchase on Amazon Kindle.Phil Escott has written two health improvement books. Arthritis – The Best Thing That Ever Happened to Me: Healing The Pain Of Psoriatic And Rheumatoid Arthritis And How Autoimmunity Can Heal Your Body And Soul was released on 29 June, 2016 and has been a Top Seller on Kindle ever since. PURE ACTIVITY: Minimise the impact of cardio workouts, build muscle and lose fat with inspiration from paleo, Ayurveda, HIIT and yoga was released 24 October, 2016. And for something totally different, read his Paranormal Romance novel called An Illusion of Maya which was released 9 November, 2016.Phil Escott Author Address - 15 Merewood, WN8 6RU, Skelmersdale, UK Phone - (44) 7718 318647 Website - philescott-author.com/ Contact - Phil Escott - phil.escott@pureactivity.net