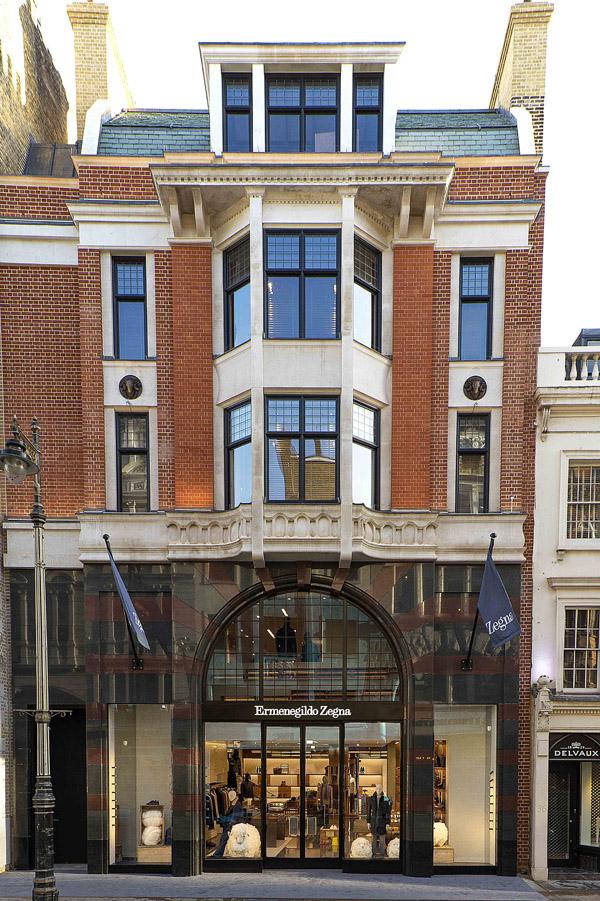 Unique to this store, which is located in the same position as the very first Ermenegildo Zegna boutique in London, opened in 1987, is a stunning façade honoring English heritage and blending seamless with the historical architecture of London’s New Bond Street. The façade’s use of red and grey marble in various shades provides a sense of depth, while the characteristic red bricks that line the upper part of the façade, the bow-windows facing New Bond Street and the vintage bar from the 1950s come together in a heartfelt tribute to British culture.

Capturing the spirit of the Ermenegildo Zegna brand, metal strands are used in the two windows representing the warp and weft yarns of a loom, architectural sheep heads are placed on the window keystones and the bas-relief is inspired by the sheep heads at Villa Zegna in Trivero (Italy). The new Global Store also reflects the brand’s longstanding commitment to social and environmental well- being in terms of its eco-sustainability.

The store has been designed to create a virtual journey through the world of Ermenegildo Zegna, transmitting both the history and DNA of the company, along with the complete range of its luxurious menswear collections. As customers enter the Zegna World on the ground floor, they are surrounded by the dark and natural tones of the entrance and the wide selection of textile accessories, refined leather goods and licensing products. The rich tones of the entrance compliment the bright color palette of the new concept area specifically designed by Peter Marino to host Zegna’s ready-to-wear collection where casual- tailoring and luxury sportswear harmoniously merge. This space, a novelty for Peter Marino concept stores, is characterized by polished rosewood with a rusticated design and cerused ashwood in ivory. The new concept experience continues on the first floor where light colors prevail and the walls are lined in cerused ashwood and three-dimensional plaster. Dedicated to informal clothing and accessories, the area and its furnishings, including Afra and Tobia Scarpa armchairs and a sofa, bask in the natural light of the external windows.

As clients move to the second floor, the staircase functions as the central circulation and is also a visual focal point featuring a floating, open design with ebonized oak tread tops and beneath, suspended polished metal rods resembling textile stands are backlit by LED lights. The second floor mirrors the sophisticated and classic tailoring of Ermenegildo Zegna formalwear as customers are greeted with a luxurious space designed to reflect the elegance of impeccable garments. The same floor also hosts the Ermenegildo Zegna Couture collection in a dedicated area where the expertise and traditional heritage of the brand meet the industrial world through the skillful use of exclusive materials, such as gouged mahogany, ivory plain oak and parchment or black oil- quenched steel, within an ivory color palette.

The third and final floor is divided into two distinct zones, both of which are enhanced by the prominent bow-window facing New Bond Street, together with the golden fireplace in light marble and the vintage bar from the 1950s, all evoking the feeling of a British gentleman’s club. Featuring precious artwork thatreflects the brand’s heritage and consistent support for the arts, this floor is home to the exclusive Su Misura service, the ultimate Zegna offering, and has been furnished to create a very intimate and private space.

The New Bond Street Global Store is also home to artworks by Giovanni Caccamo and Frank Thiel that portray a part of Zegna’s history, such as the photo by Caccamo of Oasi Zegna, the natural park surrounding Trivero, or are a reference to a key element of the brand’s DNA, such as the looms which are featured in Thiel’s piece. Yet it is the tapestry Dare / Avere (2016) by the South-African artist William Kentridge that catches the eye as customers enjoy the intimacy of the Zegna experience. Specifically commissioned by ZegnArt to be permanently displayed inside the New Bond Street Global Store, the 250 x 360 cm tapestry made with mohair threads is an interpretation of the history and values of Ermenegildo Zegna; a snapshot of the company’s centennial progress, captured by sewing together arts, traditions, places, experiences and gestures that will immediately intrigue the observer.

The London flagship follows openings in Milan, New York, Osaka, Hong Kong, Shanghai, Hangzhou, Beverly Hills and Tokyo and is the result of the fruitful partnership between Zegna and architect Peter Marino, whose design reflects the brand’s quality materials, integrity and modern style throughout the space. Of exceptional note is New York's Fifth Avenue Global Store, which won the American Institute of Architects New York State Merit Award for Architecture in 2008.

About Ermenegildo Zegna Group
The Ermenegildo Zegna Group is a leading luxury menswear brand and one of the most renowned businesses in Italy. Founded in 1910 in Trivero, in the Biella Alps, by the young entrepreneur Ermenegildo, whose vision was to ethically create the world’s finest textiles through innovation and the sourcing of the noblest fibers directly from their markets of origin, the company is managed today by the fourth generation of the Zegna family with Gildo Zegna as CEO. Since the late 1980s, the company has implemented a comprehensive strategy of verticalization, creating a global luxury brand which now ranges from fabric to clothing to accessories, is focused on retailing, pioneering early entry in emerging luxury markets, BRIC and Asia in particular, and was the first luxury brand to open a monobrand store in China in 1991.
Ermenegildo Zegna celebrated 100 years of excellence in 2010. Today there are 524 Zegna stores (307 company-owned) in over 100 countries around the world. The total Group revenues in 2015 reached € 1.261 bn.
In 2012 the Group launched ZegnArt, an independent commitment focused on international collaboration in the field of visual arts and in February 2014, the Group announced the Ermenegildo Zegna Founder’s Scholarship, a 25-year project named for its founder with an annual investment in education of €1 million.

11-20-2017 | Fashion, Lifestyle, Trends
Future Market Insights
Hair Bond Multiplier Market: Trends and opportunities
Owing to growing fashion trends and the need to define a distinct style quotient, individuals are more inclined towards experimenting with hair styles, modifications and different shades of hair colouring. Increasing disposable income across the globe and rising focus towards grooming and personal care among individuals has led to an increasing demand for hair treatments and modification procedures. Hair bond multiplier provides protection against chemical hair treatments, hair colourings and
04-07-2016 | Industry, Real Estate & Constr …
Peach Property Group AG
Peach Property Group tops up hybrid bond
• Private placement of CHF 12.5 Mio. with international investors • Issue volume increases to a total of CHF 37.5 million • Proceeds to be used for expanding the investment portfolio Zurich, 7. April 2016 – Peach Property Group, an investor specialising in the management of residential property in Germany, today announced that is has topped up its hybrid bond issued in December 2015 by an additional CHF 12.5 million by way of a private
09-05-2011 | Business, Economy, Finances, B …
Forestry Research Associates
Welsh Forestry Investment Bond Launched
Seattle, WA, September 03, 2011 -- An innovative Wales-based forestry investment firm has started up and has attracted support from Forestry Research Associates (FRA). Woodland Bond is a concept launched by managing director John Tunnicliffe, who wanted to offer people the chance to invest in Welsh woodland, while helping to manage the woodland in the country sustainably. FRA has spoken out in support of the idea, which is similar to the successful
03-14-2011 | Industry, Real Estate & Constr …
James Instruments Inc.
James Bond Test™ MK III Developed for Adhesion, Bond and Other Tensile Strengt …
James Instruments Inc. manufacturer of the world's most advanced Non Destructive Test Equipment for construction materials has developed the James Bond Test MK III for measuring the bond strength/tensile strength/adhesion strength of concrete, asphalt, tile, concrete repair, or other overlay material by the direct tension or pull off method. It uses disc attached to the material under test to, 1. Measure the
12-06-2010 | Business, Economy, Finances, B …
Barvetii Wealth Consultants Spain
First Bond Sale: Greece by Barvetii
Greece has successfully sold government bonds in its first attempt since the huge EU-IMF loan bail-out was launched in early May. Analysts at Barvetii International Wealth Consultants the international wealth consultants believe this first bond sale will test investors’ appetites after a recent downgrade by the credit rating agencies, which cut the country’s rating to "junk". The benchmark Greek 10-year bond yield trades at 10%, almost twice as much as Spain’s,
10-31-2008 | Leisure, Entertainment, Miscel …
ZENDOME GmbH
Temporary Architecture for James Bond Premier Event
Mobile Event Architecture by the Berlin company ZENDOME supports the German Premier of the 22nd James Bond film on 3rd November 2008. The Berlin company ZENDOME provides mobile architecture for the premier the James Bond film “A Quantum of Solace”, on 3rd November 2008, the most important film adventure of the year. Sony Pictures presents the German premier at the Potsdamer Platz where Daniel Craig brings glamour to the capital as
Comments about openPR
OpenPR is clearly structured and remains true to its principle of confining itself to the essential parts. OpenPR has proven to be a very good and reliable partner to our media agency: Within the shortest time the releases are online and go down well with the media representatives. The success of OpenPR is reflected in the steadily increasing number of press releases. It is good that OpenPR exists!
Ursula Koslik, Director Marketing & PR, F+W Hamburg