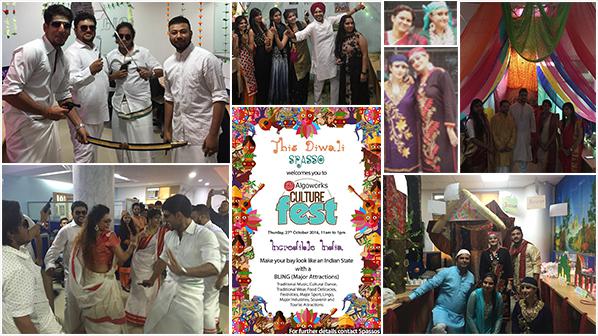 This year Algoworks celebrated the grand festival of Diwali in an exceptional way. No crackers, no sound but still Algoworks seem to have brought the entire nation together. The HR Department’s ‘Spasso’ team came up with yet another brilliant idea of portraying the theme of Incredible India. What no one knew were the surprise performances by some otherwise very gentle-looking employees to make the event memorable in many years to come. After the huge success of Spasso event last year, Spasso decided to brighten up Algoworks by inviting everyone in the office to compete by best representing a particular state of India. Thereby allowing people to visit the different places, their people, the food and their vivid culture all under one roof. Each bay was successfully morphed into a particular state. From one bay brilliantly exhibiting the bright colors of Punjab to another portraying the beautiful heaven of Kashmir, colors splashed and everyone’s creativity and enthusiasm flooded the office floors. While Bengal smelled of sweets and massive decorations, those visiting the Rajasthan bay slowly got lost in the folk songs of the state. From the picturesque Uttar Pradesh to the vigorous Gujarat and an amazing portrayal of the temples and Tollywood of Tamil Nadu, all the participant teams showed utmost dedication and did justice to their chosen states. Directors of Algoworks as well as the HR team wholeheartedly participated in the event ‘Incredible India’. They judged the entire event based on various factors such as attention to details, the ambience and colors and most importantly the ‘bling’ factor – a factor that stays in the hearts of the ‘tourists’ even after they have left the state. No wonder that Team Kashmir was the team with most fabulous designs, colors and attention to details of the state. But all their efforts were only second to the magnanimous efforts by Team Tamil Nadu who may have been just at par with Team Kashmir, but the surprise of the event was the ‘Anna’ Nauman Ahmad, who lead the team with example- exhibiting such finesse in his act and plunging unimaginable amount of energy in his performance, most were left dumbfounded. The entertainment that Team Tamil Nadu posted was unquestionable such that all of them spoke in fluent Tamil and bullying everyone around flashing their ‘toy-pistols’ all around and most importantly, never losing character. The other names from the winning team are Mudit Singh, Rahul Sharma, Deepti Jain, Pranav Jain, Shiv Sharma and Sugandha Arora. “There is no doubt who are the deserving winners. We got the taste in their walks, talks, and amazing dances. This competition was not about ‘best description’ of a state, but about the best representation of the state. Team Tamil Nadu did that to perfection.” remarked Rachit, co-Founder and Director at Algoworks acting one of the 5 judges on the day. The long entertaining day came to an end with songs-from-each-state organized by HR for all, snacks distribution and group photo sessions.About Algoworks: Algoworks is a global IT service provider which was founded in the year 2006. Algoworks operates chiefly in the United States from their California Office besides having a good hold on the European and Asian markets. Algoworks has expertise in key areas of ECM, CRM, mobility and Software Product Engineering. For more information visit www.algoworks.comAlgoworks celebrated Diwali with utmost zeal and enthusiasm. Zero crackers, Out-of-the-world performances, unstoppable music, and loads of entertainment. #IncredibleIndiaAlgoworks, A 61/B 4, Spring Meadows Business Park, Sector 63, Noida 201307

06-24-2021 | IT, New Media & Software
Algoworks
Algoworks Wins Globee® in the 16th Annual 2021 IT World Awards®
Algoworks announced today that The Globee® Awards, organizers of the world’s premier business awards programs and business ranking lists, has named Algoworks a winner in the 16th Annual 2021 IT World Awards®. These prestigious global awards recognize information technology and cybersecurity vendors with advanced, ground-breaking products, solutions, and services that are helping set the bar higher for others in all areas of technology and cybersecurity. “We are glad to be recognized
08-12-2020 | IT, New Media & Software
Algoworks
Algoworks Wins the Prestigious ComHQ’s Editor’s Choice Award in the Category …
Algoworks, a multinational B2B IT Services firm, has announced it has earned the esteemed honor “Top app development company 2020" award. In appreciation of India's leading private companies, COMHQ declared this, honoring those companies' Innovations, technologies, and culture across the sectors concerned. Ajeet Singh, Co-Founder and Director, Algoworks, thanks to the countless efforts and the expertise of incredibly diverse teams, continuously reaching out to consumers and making their views
08-22-2019 | IT, New Media & Software
Algoworks
Kashmir ‘wins’ in Algoworks’ Independence Day Celebrations
To celebrate this year’s Independence Day, Algoworks organized an internal contest for its 400 members strong family, where ‘Team Oregano’ won the Sandwich Making Contest adjudged by the well-renowned chef Shankar Dey. The 15th August of every year is celebrated as the Independence Day in India to commemorate the independence of India from the British. Every year, Algoworks strives to combine creativity with patriotism. The team event organized by Algoworks for
06-26-2019 | IT, New Media & Software
Algoworks
Algoworks Attends Conga Connect Sydney 2019
Conga Connect, an event hosted by Conga all around the globe, just got done with its Sydney event on 20 June 2019. The event hosted more than 260 attendees and various Salesforce industry experts on the keynote panel. Demo stations, solution stations, partner summit, and discussions, the event had it all. Rahul Vohra, Salesforce Principal Consultant at Algoworks attended the event on June 20, 2019. Vohra shared his experience, said,