FED Publishing Releases New Book, "It's In Their Blood: A Memoir of Siblings Reunited and Their Showbiz Legacy" by Scott Lee Needham 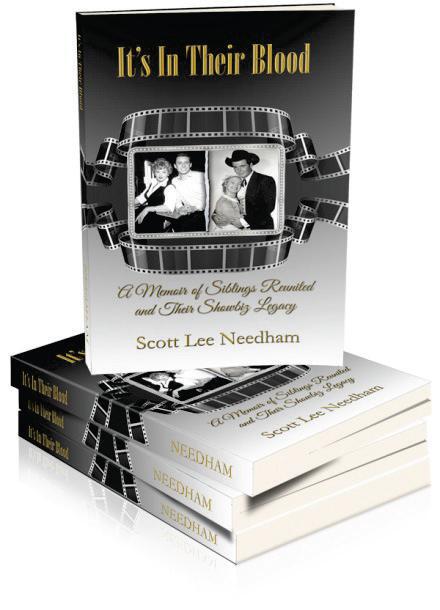 It's In Their Blood: A Memoir of Siblings Reunited and Their Showbiz Legacy, by Scott Lee Needham, is a sibling reunion 70 years in the making.La Mirada, CA, USA -- Scott Lee Needham's It's In Their Blood: A Memoir of Siblings Reunited and Their Showbiz Legacy is about the seemingly impossible. Siblings of a Vaudeville family separated at a young age, venture to Hollywood on separate paths, then reunite after 70 years.This Memoir is written through the eyes, interviews, research and experiences of the author. It is a gift to his family; a verification of genetic history once lost, now found, resulting in discovery that had no memory, and memories that made a 70-year reunion possible. It is also a story for all of us, starting within this family and its consistent success in the professions that helped corroborate the passion and need to communicate. From printers, writers and publishers to vaudevillians and Hollywood actors, this true story reminds all of us about the wonders of inheritance, and how its relevancy revealed the seemingly miraculous. This family, once together and thriving, then separated for decades, now united and forever recorded within their memories and the contents of this book.Author Scott Lee Needham's professions have ranged from management, to business owner to Electrician. He has written poetry for twenty years, but never took his writing seriously enough to publish...until now. IT'S IN THEIR BLOOD was a story that was not a choice as he describes, but a passionate and purposeful venture that resulted in not only his families historical recording, but a story for all to enjoy. Soon to publish his poetry, he also is working on a children's book. He lives with his wife and daughter in Southern California.Genre - Entertainment, Vaudeville, Theater, Hollywood, Actors, Reunion, Siblings, Orphanage, Printers, PublishersThe ebook version of It's In Their Blood: A Memoir of Siblings Reunited and Their Showbiz Legacy ISBN 9781506902029, published by First Edition Design Publishing (http://www.firsteditiondesignpublishing.com), is available on-line wherever ebooks are sold. The 204 page print book version ISBN 9781506902005, and hardcopy version ISBN 9781506902012 is published by First Edition Design Publishing and distributed worldwide to online booksellers.About First Edition Design Publishing First Edition Design Publishing (aggregator) formats, converts and submits your book to over thousands of eBook and POD (PRINT) distribution points worldwide and to the top internet retailers including but not limited to - Apple, Amazon, Barnes & Noble, Kobo, Google, Ciando, e-Sentral, EBSCO and more.Media Contact: First Edition Design Publishing PO Box 20217, Sarasota FL 34276 +1(941)921-2607 sales@firsteditiondesign.com www.firsteditiondesignpublishing.com

You can edit or delete your press release FED Publishing Releases New Book, "It's In Their Blood: A Memoir of Siblings Reunited and Their Showbiz Legacy" by Scott Lee Needham here