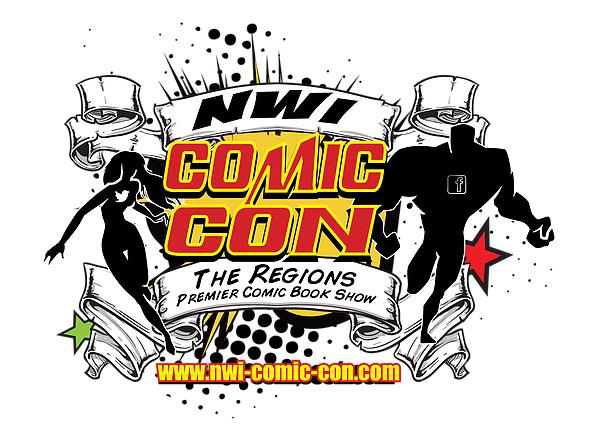 The NWI Comic-Con wants to bring pop-culture back to Northwest Indiana and you can help!The NWI Comic-Con LLC. (NWICC) is pleased to announce the launch of a Kickstarter crowd-funding campaign. Funding earned via Kickstarter will be specifically divided to enhance the convention experience for our guests and attendees. The more funding this Kickstarter campaign generates, the more we can do within the Northwest Indiana Region. We pride ourselves on giving you the best possible comic-con convention experience. The NWICC has experienced exponential growth since our inception in 2014. Record crowds indulged their inner geeks at the 2016 NWI Comic-Con. “Based on what we are hearing from our fans, VIP guests, exhibitors and retailers, this year’s Con was a success by all measures. We are extremely grateful to everyone for having helped the NWI Comic-Con become the region’s largest and most important entertainment event, and look forward to better experiences in the years ahead,” said Brian Grabinski, showrunner of the NWICC. As the economy changes, costs continue to rise. We count on Sponsors, Advertisers and this Kickstarter campagin to assist us with keeping this convention affordable for everyone involved. The NWI Comic-Con provides our sponsors and advertisers with the opportunity to get their brand and products in front of thousands of attendees from all walks of life. Be part of the regions premier pop culture phenomenon that brings the perfect blend of comics, and entertainment, appealing to fans everywhere. We are not corporate owned or operated, we just truly enjoy sharing our love of Comics and Pop- Culture with the Northwest Indiana community. So the more Backers that support us the bigger and better the 2017 NWI Comic-Con will be!! 100% of our the raised contributions will be put back into this comic book convention. To learn more about Kickstarter and supporting the NWI Comic-Con's $6,000 campaign, please visit https://goo.gl/pcgidPMedia ContactCompany Name: NWI Comic-Con LLC. Name: Brian Grabinski Email Address: nwi-comic-con@inbox.com Website: www.nwi-comic-con.com Facebook: facebook.com/nwicomiccon Twitter: twitter.com/NwiComicConAs Northwest Indiana's premiere family-friendly comic book convention, we provide a variety of exhibitors that cater to a wide-spectrum of pop-culture fansCompany Name: NWI Comic-Con LLC. Name: Brian Grabinski Addreess: Kennedy Ave. Schererville, IN 46375 Email Address: nwi-comic-con@inbox.com Website: www.nwi-comic-con.com Facebook: facebook.com/nwicomiccon Twitter: twitter.com/NwiComicCon

02-06-2019 | Leisure, Entertainment, Miscel …
CreaLab
Eastern Mystery Board Game on Kickstarter
An eastern style ancient board game with full of mysteries! The most wanted game for families and friend groups. BRESCIA, Italy - Feb. 6, 2019 -- Eastern Mystery a new board game from CreaLab is going to be launched on Kickstarter in the middle of February. Eastern Mystery has been play tested by over 30 people across the world, and it will launch on Kickstarter with the full art and design
09-28-2017 | Fashion, Lifestyle, Trends
WHY Watches
Kickstarter News: Architect to Watch Entrepreneur
Imagine a world where luxury wasn’t exclusive, where a professional service didn’t come with the professional price tag. We here at WHY, aspire to produce luxurious, architectural designed timepieces at an affordable price. That's the world WHY Watches Founder and Managing Director David Tomic has in mind! With six years of university education, we understand the importance of purposeful design. We create each of our watches with industry leading software, focusing
09-21-2017 | Media & Telecommunications
B&F Commerce GmbH
The NanoPad Announces 250% Funding on Kickstarter
The NanoPad has launched a successful Kickstarter campaign for its Newest, hardest NanoPad and has raised more than 250 percent of its initial goal. The company has since partnered with Greeninbox to increase its number of backers. Performance and Specs The NanoPad is an application, that momentarily glues the phone to a smooth surface. Thereby it serves as a fixation tool to those who rely on their phone when coping with daily
12-01-2016 | Science & Education
FIBEG Forschungsinstitut für biologische Entwicklung und Gutachten GmbH
Slothy Soil – now live on Kickstarter
The newest discovery of the FIBEG Research Center – The revival of the paradise on earth, the flowering and blooming Pleistocene by Slothy Soil. Enables lovers of paleo-food to do paleo-gardening. Frankfurt am Main, 12/01/2016 – 4:00 PM CET FIBEG Research Center (Frankfurt Main, Germany) presents Slothy Soil as a crowdfunding project on kickstarter.com. The project can be supported from 12/01/2016 to 12/30/2016. Supporters will get bags of Slothy Soil
06-28-2016 | Fashion, Lifestyle, Trends
Instantavia
Australia's GOLDI launches Kickstarter campaign
Based on the book, ‘The Raven’s Economy’, the founder of Instantavia, a Melbourne based start-up active athleisure retail company is running a Kickstarter campaign to raise funds for production of the first collection. Never before has a book laid out the vision for the company in a literary description before the company has even been formed. The book examines the opportunities in today’s definition of corporation, political and
04-18-2016 | IT, New Media & Software
Red Unit Studios
Digital Tabletop Wargame Warbands: Bushido Hits Kickstarter
Warbands: Bushido, a classical boardgame with cards, more than a hundred of miniatures, dices and dozens of beautiful terrains to fight on, hits Kickstarter aiming to bring the true tabletop wargame experience to the PC and mobile devices. The game plans to make crossplatform multiplayer battles boardgamers are used to and beautiful single-player scenarios available on Steam, MacOS and iOS. Game background is the story of civil war in 16th century
Comments about openPR
Your portal is fast, simple, and easy to use. Others may have more functions but they also demand more editing time, you have to preformat the text in order to achieve a good result etc. I think openPR is really fantastic!
Andreas Knepper, wallmedien AG