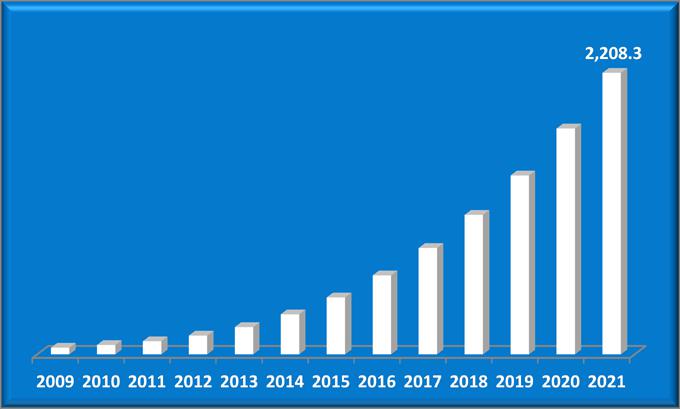 Government Projects & Initiatives, Declining Prices and Domestic Manufacturing Poised to Spur LED Lighting Market– 6WresearchOver the years, demand for power has increased exponentially in India that has resulted into usage of appliances or products that are power efficient in nature. In India, lighting application consumes significant share of the country's total power. Owing to demand-supply gap and need to conserve power, utilization of power efficient lighting source has become critically important. LED based bulbs are emerging as key viable sources of power, which can save power up-to 50%.According to 6Wresearch, India’s LED Lighting market is projected to reach $2.2 billion by 2021. LED Lighting market in India is in its nascent stage; however, high growth is anticipated due to government initiatives to replace incandescent bulbs with LED bulbs in streetlight application. Also, with growing awareness and reduction of prices the market for LED Lighting is exhibited to attain tremendous growth in the forecast period. Additionally, with government initiatives to promote domestic manufacturing, prices are expected to decline further, thus boosting the growth of the market. In 2015, the Government of India announced the distribution of LED bulbs at subsidized rate would further drive the adoption in the country.Amongst all applications, streetlight is one of the key growing applications in India’s LED lighting market. Central and State governments have taken initiatives to deploy LED bulbs at various locations. For the same, several pilot projects are under process or in planned phase, where traditional streetlights would be replaced by LED bulbs. Chandigarh, Delhi, West Bengal, Maharashtra, Andhra Pradesh, Gujarat, Uttrakhand, and Punjab are some of the states where such initiatives have been taken.Also, in the coming years, as the concept of green building and smart homes increases, demand for LED bulbs is exhibited to surge, which would bolster growth of the market especially in outdoor and indoor applications.In India’s LED lighting market, Philips has captured key share of the market pie in 2014. Through the forecast period, share of Philips is expected to increase further. Other key players of the market include- Syska, Havells, GE and OSRAM.“India LED Lighting Market (2015–2021)”provides in-depth analysis of the report with 50 figures and 16 tables covered in 112 pages. The report estimates and forecast LED Lighting market by revenue, by applications and regions. The report also gives the insights on competitive landscape, market share by companies, company profiles, market drivers and restraints.Source Link: http://www.6wresearch.com/press-releases/india-led-lighting-market-2015-2021-share-news-forecasts-shipments.htmlFor Further details, please contact: Email Us: sales@6wresearch.com Call Now: +91-11-430-24-305With over 1000 custom research projects, 6Wresearch is a global market research and consulting firm specializes in niche and emerging markets.The Company over the past few years has developed itself to be a renowned market intelligence company which led strong emphasis on competitive and strategic intelligence.6Wresearch, through its integrated survey model, offers its client real time market and competitive intelligence and thus enable our clients to devise market entry strategies to target particular market and geography.Delhi/NCR Office 809, 8th Floor, Pearls Best Heights - II Netaji Subhash Place, Pitampura New Delhi, India-110034 Phone: +911143024305