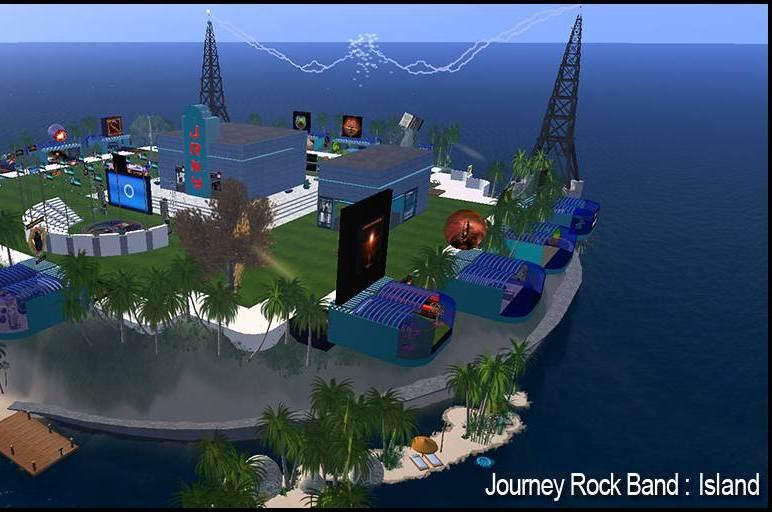 On Feb 1st 2008 the rock band Journey will release their new Virtual Island in Second Life. A grand opening party is planned inside Second Life at the "Journey Rock Band" sim and will feature a meet and greet with band members as well as live DJ's covering much of Journey’s history, and playing recorded studio and live performances as well as lots of other great music for fans to party to! The grand opening party is scheduled to start at 10:00 am on Feb 1st. The Journey island region in Second Life is named “Journey Rock Band”. Learn more at http://www.secondlife.com Journey has long been known for innovations in stage sets so creating a Second Life Island for fans to enjoy was an easy decision. The island features dedicated areas for each album along with audio and video presentations. There are also two venues on the island the Escape Club and the Captured Amphitheater where live SL events can be held. Journey’s new redesigned website http://www.journeymusic.com will be re-launched on or around January 29th. It will feature band history, tour information, photos and a new forum. Journey is currently getting ready to start their 2008 World Tour which begins in Santiago Chile in mid February. http://slurl.com/secondlife/Journey%20Rock%20Band/129/198/41 The Journey Island was built by Industrial-Design.com Journey’s long time web developer and features work by SL builders Farrokh Vavoom, Argus Collingwood, Adrian Harbinger and Jocelyn Sands. Tammas Dyrssen Live Music Events (Virtual World Company existing only in Second Life) produces live music events in the virtual world of Second Life only. Tammas Dyrssen Live Music Events (TDLME) is privately owned and operated

02-25-2021 | Fashion, Lifestyle, Trends
BeautySourcing.com
A Special China Market Explore Journey
Individualism and a need for newness is powering Chinese consumers allure for niche beauty which has turned China’s $62.8 billion beauty market into a promised land for international and domestic niche beauty brands. Due to the international travel restrictions, many beauty suppliers are wondering how to enter the market.  BeautySourcing, a global marketplace serving to connect beauty entrepreneurs with vendors, will join together with China International Beauty Expo (March 10-11, Guangzhou), PCHi Personal Care and Homecare Ingredients (March 24-26, Shenzhen), China Beauty Expo (May 12-14, Shanghai), to provide you a market trial experience to enter into China during this special time. Why You Must Participate No Travel/Commute: this is held online, so you can stay home and keep safe.  Don't miss the exposure opportunities in the upcoming 4 major beauty trade shows in China because of the international travel restrictions Free admission for a market trial until you decide to upgrade, so no risk! What you will get 10 product listing on BeautySourcing marketplace for three months Company display on BeautySourcing catalog deliver during 4 major beauty trade shows in China Buyer Inquiry Register today! BeautySourcing.com power the growth of global beauty supply side. With more than 15 years of experience leading exhibitors to attend 100 worldwide beauty trade shows. We are expert in reviewing suppliers capabilities and making the most use of the worldwide resources of beauty trade shows. With the outbreak of COVID-19, International flight suspensions caused a big impact in beauty supply side sourcing trade. Concerned people
02-12-2021 | Business, Economy, Finances, B …
Dundee and Angus Chamber of Commerce
Social Entrepreneur to share her Pandemic Journey
Social Good Connect Founder & CEO, Caroline McKenna, will join Dundee & Angus Chamber of Commerce (DACC) on their Leading Ladies webinar next week to share her pandemic journey. The event, which will also be joined by Hayley Wilkes, Owner of WeeCOOK and Kelly Fairweather, Founder of At Your Service Scotland as panel members, will be held virtually and invites people from across the region to hear from these inspiring
07-30-2018 | Advertising, Media Consulting, …
Spire Research and Consulting
Bangladesh – A journey from poverty to development
Equivalent to the combined population of the Netherlands, Germany and France, Bangladesh is home to 160 million people. Although it is ranked as one of the world’s poorest of the 10 most populous countries, its economy grew by 7.1 per cent in 2016, a 30 year record. The country is starting to attract the attention of global companies. Can Bangladesh make poverty history? The story so far Bangladesh gained independence from Pakistan
09-19-2016 | Arts & Culture
Izai Amorim
A JOURNEY OF SELF-DISCOVERY
A wrongfully-accused man learns what he’s truly capable of in “On the Run” Izai Amorim’s upcoming novel, On the Run, offers an intriguing look into conflicting worlds: rich and poor, North and Latin America, rational and esoteric, and how these worlds mix, match and clash. Pablo is a young, educated, rich man in New York City who sees his entire life turn around when he’s accused of crimes he didn’t
05-18-2016 | Business, Economy, Finances, B …
SMARTe Inc
Journey of SMARTe with SiriusDecision
SiriusDecisions Summits are foremost B2B conferences, attracting the best and the brightest in B2B sales, marketing and product from Fortune 500 companies and major small to medium-sized enterprises. Delegates receive SiriusDecisions’ latest insight, data, models, and frameworks, and they learn about the technology and services that power B2B. SiriusDecisions empowers the world's leading sales, marketing, and product leaders to make better decisions, execute with precision and accelerate growth. Clients rely on
10-01-2013 | Arts & Culture
Jaguar VNM Worldwide PR Services
Insightful Book Reveals One Man’s Meaningful Journey
New York, May 30, 2013. – Author Jan Gero reveals that there is life after 50, 60, and, hopefully, long after 80. The book "Me on Me" (published by iUniverse) is now available. In this book, Jan Gero introduces his groundbreaking work of non-fiction writing. Gero has spent fifty years processing his personal journey through a sometimes chaotic life — writing, drawing, and speaking his journals to gain psychological insight
Comments about openPR
OpenPR ist the nicest and most clearly laid out PR platform I have seen to this day. The press releases are displayed very nicely and clearly and without any unnecessary frills. The updates are fast and the finished release looks appealing and is clearly legible. Even with 16 years of experience one discovers new things from time to time. Congratulations!
Gabriele Ketterl, Director Marketing & PR, Menads