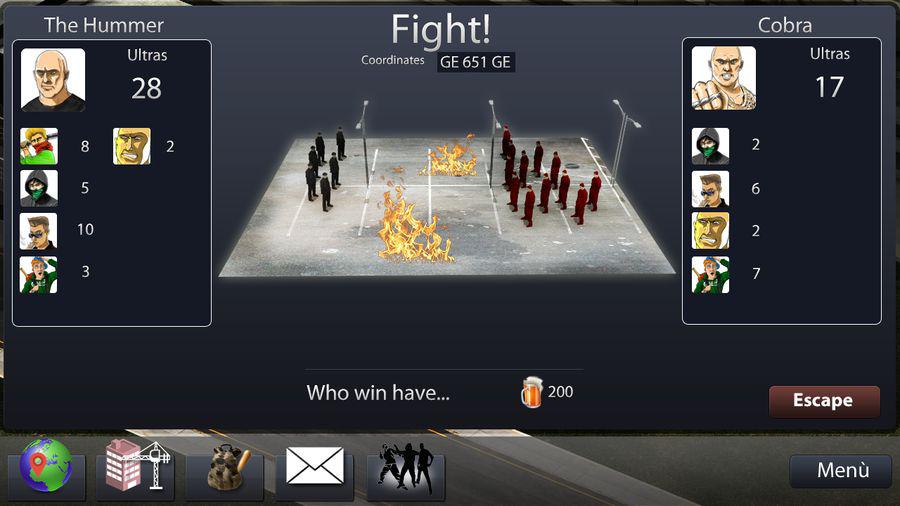 The first videogame based on real ultras in the world By Digital Press September 1 2016 Tuscany, Italy - Ultras, need we say more? Take control of your fellow die-hard supporters, create your own group, energize your ultra leaders and get ready to fight against other real players. Create your own ultras, get on the coach, hold the belt in your fist and defend your sector. About the game In Ultras - Beer & brawls, the player takes control of their supporter group, chooses the components, manages the district and improves the equipment and the skills of each element. Contact other players to create or join a group and prepare to fights with other real player all over the world. The game, half way between a managerial and a PvP (Player vs Player), allows to clash with other factions, grow the supporter base and player district, obtain resources and humiliate the opponent by painting his neighborhood with the colors of your favorite team! The game was created to be distributed free on the App Store and Google Play store, a strategy game where die-hard supporters, the ultras, are absolute protagonists. The world of true ultras brought to a strategic and social game that connects the player with all the groups scattered in every corner of the world. Build, enhance, fight, conquest and form groups directly on your iOS or Android smartphone. In this hours the crowdfunding campaign on Indiegogo is started, the goal for make this project finished is 50.000 euros. We need all ultras and players support for make it real and available on iOS, Android and PC bonus version. Media link Official site: http://www.ultrasthegame.com/ Facebook page: https://www.facebook.com/ultrasthegame/ Indiegogo campagin: indiegogo.com/projects/ultras-beer-brawls-soccer/x/14542647#/ Download media Kit images: ultrasthegame.com/media-kit/ Contact: Digital Press Via Fiumalbi 29 - 56025 Pontedera –Italy www.digital-press.it r.lombardo@digital-press.it Digital Press is a media company based in Italy for digital marketing, PR, Crowdfunding and angel investor. Digital Press r.lombardo@digital-press.it Via Fiumalbi, 29 56025 Pontedera Italy

You can edit or delete your press release Ultras - Beer & Brawls, the game here