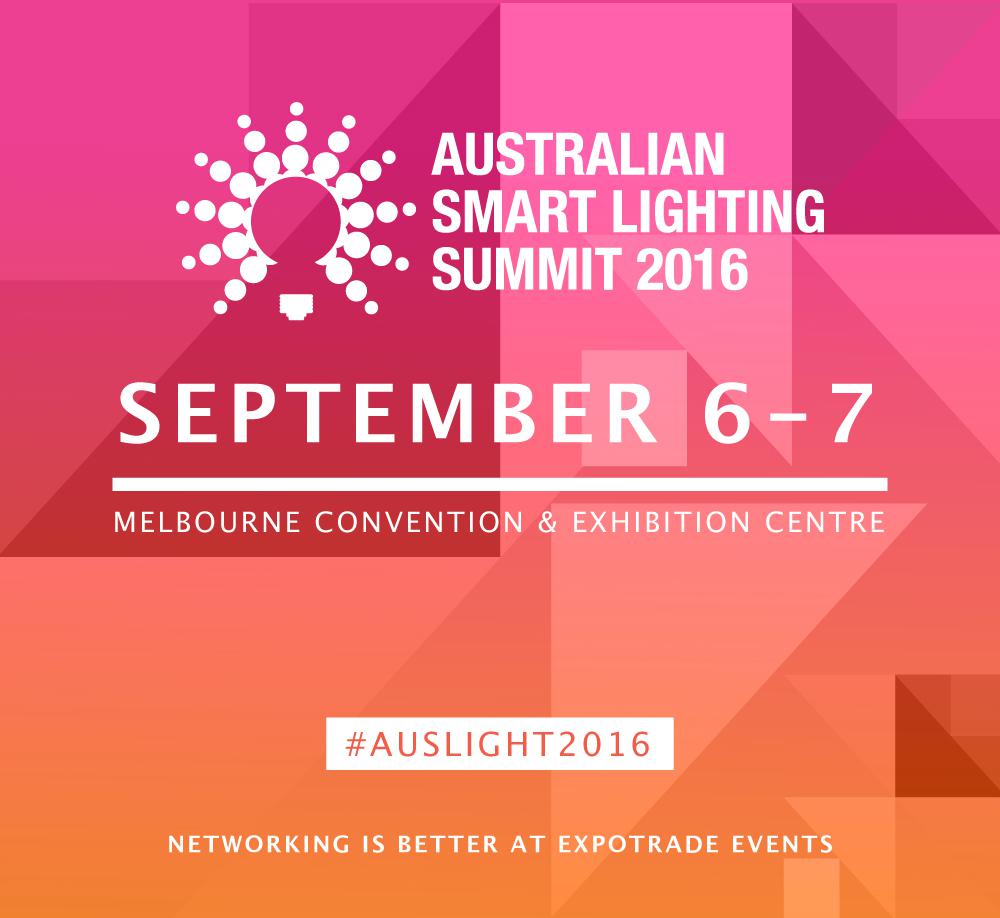 The 2016 edition of Australia’s largest annual Smart Lighting Summit, with smart and sustainable lighting as a central theme on the agenda, once again convenes in Melbourne next week from the 6th to the 7th of September. With endorsement from City of Melbourne and support from Lighting Council Australia and IESANZ, the summit is set to feature both locally and internationally renowned lighting experts and speakers, highlighting latest trends and developments within the lighting sector. Bringing together over 150 key lighting industry stakeholders, with passionate lighting industry professionals ranging from engineers, architects, manufacturers, public sector representatives, road authorities, consultants and lighting designers, the summit affords delegates the opportunity to comprehensively explore the future of smart lighting in Australia and around the globe by looking at international industry parallels and experiences. Headlining a quality lineup of presenters, including Regional Development Australia Northern Inland (RDANI) Senior Projects Officer – Northern Lights Project David Thompson, Washington DC’s Smart Outdoor Lighting Alliance (SOLA) Executive Director Bob Parks and Light and Culture Program Advisor Rik van Stiphout from the City of Eindhoven where the multinational corporation Philips was founded 1891. Eindhoven, the Netherlands’ “city of light”, considered to be at the forefront of energy and lighting innovation infrastructure, is one of the first cities in Europe to develop its urban lighting system into an integrated ‘Smart Light Grid’ in an effort to conserve energy and increase efficiency. Eindhoven’s lighting vision has paved the way for public lighting ideas and research to be put into practice. The city’s ‘Strijp-S’ area now boasts light-enabled bus lanes and pedestrian crossings as well as easily adaptable public illumination scenes implemented on main streets. The area has quickly developed into one of the most sought-after investment areas in the city. According to the architect behind the city of Eindhoven’s lighting vision Mr Stiphout, “lighting is not only in the DNA of our city, but also in the people. In order to become a real lasting sustainable city, one has to dare to look into the future … not only [at] the environmental or cost saving side of it.” Mr Stiphout will deliver a keynote presentation on the city of Eindhoven’s smart street lighting journey at the Australian Smart Lighting Summit. Reinforcing the commitment to developing innovative and intelligent lighting solutions, Australian Smart Lighting Summit Knowledge Partner, Ironbark Sustainability’s Business Manager Alexi Lynch, forecasts LED as the future of energy efficient lighting in Australia. Large scale LED projects have already been effectively implemented in Victoria where only seven out of 79 councils have not yet undertaken an LED changeover. “We’ll see more LED projects replicated throughout Australia and more states and councils wanting to jump on board.” While “smart controls and cities are the flavour of the month”, Mr Lynch believes that project innovation is key, with Ironbark Sustainability eager to replicate successful residential LED street lighting projects in areas where there has been a lack of progress, especially in Western Australia, South Australia, Tasmania and Queensland, which will enable councils in these states to cut their energy expenditure and costs. “It’s an exciting time to be in the lighting industry with massive projects already completed and more exciting projects to come.” Following the remarkable success of the 2015 Australian Smart Lighting Summit, this year’s event will discuss smart lighting, smart cities and the Internet of Things. The summit will also concentrate on exciting international projects such as a case study of Singapore’s ‘Smart City Lighting Master Plan’ presented by Japan’s Lighting Planners Associate Principal Lighting Designer Kaoru Mende. Mr Mende describes the trend of urban lighting in night environments to have evolved to see safe, beautiful, comfortable and eco-friendly cities. Wellington’s intelligent street lighting solutions will be presented by New Zealand’s Wellington City Council Team Leader in Strategic Planning, Transport & Waste Operations, Paul Glennie. Closer to home in Adelaide, Australia’s first intelligent street lighting trial project will also be under discussion from Adelaide City Council’s Team Leader in Business Solutions Sonjoy Ghosh. Summit sponsor NEC is working jointly with the University of Adelaide to roll out this project. The summit gained tremendous sponsorship support from major industry players such as Philips, Mayflower Complete Lighting Control, gridComm, Current powered by GE, Thorlux and Sylvania among other homegrown lighting companies. Taking place at Melbourne’s premiere conference venue, the Melbourne Convention and Exhibition Centre, the Australian Smart Lighting Summit launches in just one week’s time on the 6th and 7th of September 2016. The immersive two day experience includes keynote presentations and panel discussions guaranteed to offer networking and learning experiences unmatched in the region.For more info please visit: www.lightingconference.com.auAbout Expotrade Expotrade is a global conference and event organizer with its head office based in Melbourne, Australia. Expotrade has delivered some of the largest, most successful B2B industry conferences and events in the areas of infrastructure, major projects, sustainability, technology & architecture. For almost 10 years, our unique blend of knowledge, experience and flexibility has accomplished an array of consistently top quality events. Today, Expotrade events enjoy such a distinctive edge, they are amongst the best patronised in the calendar. For more information, visit www.expotradeglobal.comSuite 1, Level 1, 2 Brandon Park Drive Wheelers Hill VIC 3150 Australia Tel: +613-95450360 Fax: +613-95450320 Email: info@expotrade.net.au

You can edit or delete your press release Final Countdown: Australia’s Largest Public Lighting Summit Convenes in One Week here

02-21-2019 | Tourism, Cars, Traffic
Dataforce Verlagsgesellschaft für Business Informationen mbH
Australia – A Dataforce insight
Australia, the land of the Ute (Pickup), Cyber Cars (Dealer volume demos), Novated leasing and annual registrations of around 1.1 million new cars has now become one of the latest markets to enter our portfolio. We are putting together a series of articles to hopefully give some fresh Dataforce insights into the Australian market place, with a firm eye on the True Fleet channel. With a constantly expanding population and
04-11-2018 | Industry, Real Estate & Constr …
Storewall Australia
StoreWALL Launches into Australia
Expand and organise your space with wall-mounted storage solutions from StoreWALL. StoreWALL is a premium wall-mounted storage system for home and business. The range covers wall panels, hooks, baskets, bins, brackets and shelves. Everything you need to efficiently organise and store items in the home or commercial space. With superior materials and construction, our products are built to last. Plus, you won’t find a system that’s easier to install. StoreWALL systems
07-05-2017 | Advertising, Media Consulting, …
ReportsWeb
Coffee in Australia
ReportsWeb.com has announced the addition of the “Coffee in Australia” The report focuses on global major leading industry players with information such as company profiles, product picture and specification. Influenced by the strong café culture in Australia, consumers are increasingly interested in the origins and tastes of their coffee products. Consumers ask more questions about where their coffee is from and this is reflected in the strategic plans of large companies.
06-08-2017 | Business, Economy, Finances, B …
ReportsWorldwide
Agrochemicals Market in Australia
ReportsWorldwide has announced the addition of a new report title Australia: Agrochemicals: Market Intelligence (2016-2021) to its growing collection of premium market research reports. The report “Australia: Agrochemicals: Market Intelligence (2016-2021)” provides market intelligence on the different market segments, based on type, active ingredient, formulation, crop, and pest. Market size and forecast (2016-2021) has been provided in terms of both, value (000 USD) and volume (000 KG) in the report. A
02-13-2017 | Business, Economy, Finances, B …
ReportBazzar
Cheese in Australia
Australian consumption of cheese remains buoyant with increasing demand for better quality cheese and a move away from processed cheese. In particular, cheese retail value grew 2% in current terms in 2016, up from 1% in 2015. Positive research, in recent years, on the benefits of dairy fats also contributed to increasing demand for full fat cheese. Demand for cheese was also partly fuelled by Australian consumers enjoying cheese, especially
06-09-2016 | Politics, Law & Society
ECOVIS AG Steuerberatungsgesellschaft
Australia – An Innovative Agenda?
Australia’s government tightens foreign investment laws for housing and land and introduces a National Innovation and Science Agenda to encourage innovation in business and schools. The second half of 2015 saw significant changes to Australia’s foreign investment framework come into effect, along with the government making an innovation statement which committed $1 billion over the next four years to foster and develop new ideas and new businesses in Australia. To near
Comments about openPR
Your portal is fast, simple, and easy to use. Others may have more functions but they also demand more editing time, you have to preformat the text in order to achieve a good result etc. I think openPR is really fantastic!
Andreas Knepper, wallmedien AG