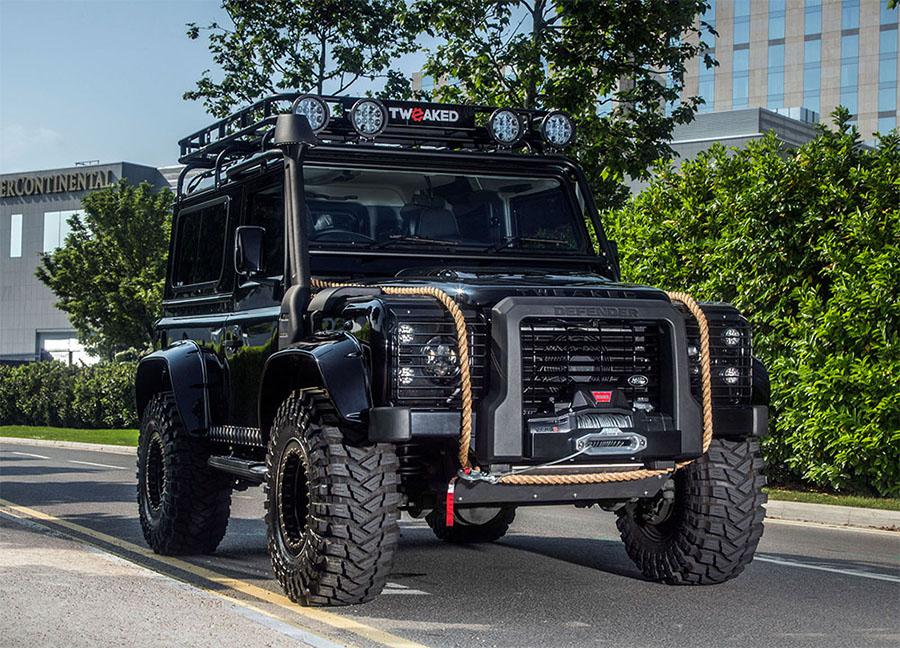 Tweaked Automotive announces its most recent special edition release, the Spectre Edition Land Rover Defender.The idea of executing a special Land Rover Defender build was circulating around the Tweaked Automotive design department for some time. The fact Land Rover ceased production of these much loved four wheel drives that have been around since 1948 prompted Tweaked Automotive to get stated as a matter of urgency. Hand in hand the 007TM Spectre big screen movie was on release featuring SVO’s designed 110 DCPU Defenders with their most purposeful stand featuring top spec components only seen on few off road rigs.This was enough to light the spark leading to the decision to proceed on a concept for a never done before 90 chassis Defender to be based on the Land Rover seen in the Spectre film. Making this a world first taking people by surprise going by the positive comments received after the teasers and launch video.The external parts were true to the ones used by SVO on the original design. Tweaked Automotive worked very hard to ensure this build was authentic as possible and utilised the highest quality components available. Tweaked Automotive carried out a large amount of custom work and fabrication which was required to ensure certain components fitted together correctly and functioned; such as the roll cage and fixed snorkel. The bumper was custom made to mimic the bumper used in the film with the raised sides and a few more details required custom work.On this build Tweaked Automotive gave the Defender 90 a two-inch lift and opted for the 35 inch Maxxis tyres rather than the 37’s used on the film car that are more suited to the 110 body. A full suspension overhaul with uprated springs/shocks, replacement heavy duty radius arms, adjustable panhard rods, heavy duty steering arms, uprated steering damper and a full upgrade to poly bushes were carried out to ensure the drive and handling matched the exterior and performance upgrades.In hand with that the engine is given a stage three tune ECU, air filter, exhaust system and intercooler boosting the power to around 185-190 BHP and raising torque levels to around 490 NM. Tweaked Automotive uplift the complete interior with their supportive leather bucket seats, leather interior upgrade, a more compact leather steering wheel, satellite navigation with full 6-view front and rear cameras and a few other unique touches, such as a built-in torch in the dash and a starter button and engine cut-out switches.This project and build took around eight weeks of research, design and the gathering of parts, fabrication and fitment of the vast number of components required for this build. Available as either a 90 or 110, Tweaked Automotive can build this edition to a Defender supplied from stock or to a customers existing Defender or to a specific Defender sourced for the customer. All the Tweaked Automotive Spectre Edition Defenders are supplied with a comprehensive build book, a numbered interior plaque and unique exterior plaque. By the number of initial enquiries and orders, Tweaked Automotive believes that they have sparked a worldwide trend for the Spectre themed Defender.Tweaked Automotive CEO Jonathan Webb expresses: "This is a proud moment for everybody at Tweaked Automotive. The introduction of our first special edition endorses the stable and sustainable growth of the company and signifies for us the beginning of a new era of themed special editions." He adds: "Our next special edition is currently in planning, demonstrating our commitment to the Defender brand."Tweaked Automotive derived from our sister company; Super Tweaks, the European performance car parts specialists offering a wide range of new parts and accessories for a range of marques including Land Rovers. The Tweaked brand has now evolved into an independent brand, offering bespoke vehicle conversion packages and customisation, as well as the sale of new and pre-owned modified vehicles.Tweaked Automotive was founded in response to growing demand in the market for modern and unique versions of the Land Rover Defender. Arguably one of the most iconic vehicle designs in the world, the Land Rover Defender has long been the vehicle of choice for a range of people and organisations across the world. With the last Defender rolling off the production line at the end of January 2016, after 68 years, Tweaked Automotive believe that the importance of the Defender will not die away anytime soon. The beauty of the Defender is that it can be anything it wants, from an urban city car, to an adventurer, to a full on off-roader. A truly dynamic vehicle that sets itself apart from the rest.For further information about Tweaked Automotive, please visit our website: www.tweakedautomotive.comPress enquiries and image requests: Please contact: Sam Email: press@tweakedautomotive.com Web: www.tweakedautomotive.com Phone: +44 (0)20 7183 1592 Address: Millennium Business Centre, Humber Road, London, NW2 6DW, United Kingdom