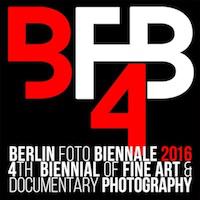 Berlin, August 2016.
Throughout October 2016 Berlin welcomes once again the largest German festival for photography, the 7th European Month of Photography Berlin. As Associated Partner of EMOP Berlin the first edition of the Berlin Foto Biennale - which is also the 4th edition of the Biennial for Fine Art and Documentary Photography - will take place at elegant Palazzo Italia, situated in the historic heart of Berlin.

The Biennial, titled "Emotions and Commotions Across Cultures" will present 1230 photos by 446 contemporary artists from 43 countries of 5 continents – among them 65% women, who have received the Julia Margaret Cameron Award for Women Photographers. The winners of this years' award, juried by Andréa Holzherr (Director of Global Exhibitions at Magnum Photos), are also included in this comprehensive photographic display.

The works represent a wide spectrum of styles ranging from documentary and wild life, to portrait and experimental photography. Recognizing a wide array of artistic expression across diverse cultures, the Biennial presents a contemporary overview of the different schools of thought emerging from the United States to China, from Australia to Turkey and from Senegal to Mexico.

The Biennial also contains an essay by emerging young talent Yusuke Suzuki about the refugee crisis on Lesbos and the chaos in Syria's Aleppo. As special invitee Magnum photographer Steve McCurry will present 130 of his most remarkable works in his solo exhibition Retrospective.

The Berlin Foto Biennale 2016 captures international trends in photography and presents us a kaleidoscope of sentiments and perceptions. In this way a photographic chronicle of our time emerges with all its emotions and commotions.

Part of the revenue from the artwork sales will be donated to Save the Children. A catalogue published by Kehrer Verlag accompanies the Biennial.

The Berlin Foto Biennale 2016 is also the 4th edition of the Biennial of Fine Art and Documentary Photography. After Madrid, Buenos Aires and Malaga the curated photo festival comes to Berlin to offer emerging and established artists from all over the world a platform, and to showcase international trends in fine art as well as documentary photography.

Chief Curator of the Berlin Foto Biennale, Julio Hirsch-Hardy, is also Managing Director of The Gala Awards, a dedicated to organize juried photography awards, such as the Julia Margaret Cameron Award for women photographers, currently in its 9th edition. The winners of this year's award will be announced on September 5th, 2016. Their work will be shown at the Berlin Foto Biennale 2016.

01-23-2014 | Business, Economy, Finances, B …
Executive Development Associates
Biennial Survey of Leading Corporations Reveals Most Important Leadership Capabi …
Leaders from some of the world’s best known large and medium-sized organizations across the globe participated in the biennial survey, which has been conducted by EDA every two years to four years since 1983. Oklahoma City, OK, January 22, 2014 - For today’s executives, the ability to develop a successful business strategy is no longer enough. In our complex business environment, the most successful organizations will be the ones with leaders
05-06-2011 | Health & Medicine
Overcome
HIV AIDS Biennial International Conference Ready For 2012
Neuilly-sur-Seine, France, May 06, 2011 -- The International Symposium of HIV and Emerging Infectious Diseases (ISHEID) Congress is announcing its HIV AIDS 2012 conference, to be held in Marseille, France from May 23 to May 25, 2012. This is an important conference -a "meeting of the minds" if you will- consisting of some of the top researchers and scientists in the field of HIV research and care. Abstracts will be
01-04-2011 | IT, New Media & Software
The Writers Block
The Writers Block (TWB) releases The 1st Biennial Survey of the Technical Commun …
Bangalore, January 4th, 2011: TWB announced today the availability of the FIRST comprehensive survey of the Indian Technical Communication industry. This survey, a first-of-its-kind in India, puts into perspective the drivers, technologies and players in this rapidly expanding industry. The survey contains data gathered from over 75 companies across the spectrum of Technical Communication domains. The sectors surveyed range from Engineering and Manufacturing, Software Products, Consulting and software services, Aerospace
11-10-2010 | Arts & Culture
ARTPARK contemporary art
Grand Finale of the Light Art Biennial Austria 2010
the Project AREA 53 presents Grand Finale of the Light Art Biennial Austria 2010 Patrick Baumüller (AT), Andrea Borgonovo (IT), Barbara Doser (AT), Heidulf Gerngross (AT), Hofstetter Kurt (AT), Manfred Kielnhofer (AT), Christoph Luckeneder (AT), Eric Michel (FR), Alexandre Murucci (BR), Anka Nidzgorska (PL), Peter Sandbichler (AT), Martina Schettina (AT), Reto Schölly (CH/D), Michael Schuster / Sonja Gangl (AT), Marco Testini (IT), Two People One Work (AT), Mounty R. P. Zentara (AT) Opening 11. Nov. 2010, 7.
07-26-2010 | Arts & Culture
Minnesota Center for Book Arts
Details Revealed for Minnesota Center for Book Arts Book Art Biennial 2011
MINNEAPOLIS—Jeff Rathermel, interim executive director, announced that Minnesota Center for Book Arts (MCBA) will present the second Book Art Biennial in summer 2011. Set to take place the last weekend of July, the Biennial will focus on the theme of extended engagement. The MCBA Prize, which reaches to all corners of the globe and attracts national and international book artists alike, will also be awarded. “Last year’s Biennial was a great
03-10-2010 | Arts & Culture
VernissageTV
Current Programming on VernissageTV: Focus New York
Basel, Switzerland, March 9, 2010 -- The current and upcoming episodes on VernissageTV Art TV focus on the art scene in New York, with highlights such as the Whitney Biennial 2010, the Jeff Koons curated show Skin Fruit at the New Museum, and The Armory Show week. Focus New York: Whitney Biennial, Art Fairs, Galleries The current programming on VernissageTV has its focus on the art events during the Armory Show
Comments about openPR
9 o'clock: discuss press release with client, 10 o'clock: submit release to openPR, within the briefest possible time release is published and displayed in a prominent place on openPR.de. I am thrilled!
Zehra Spindler, Calypso Now! - Communication Agency