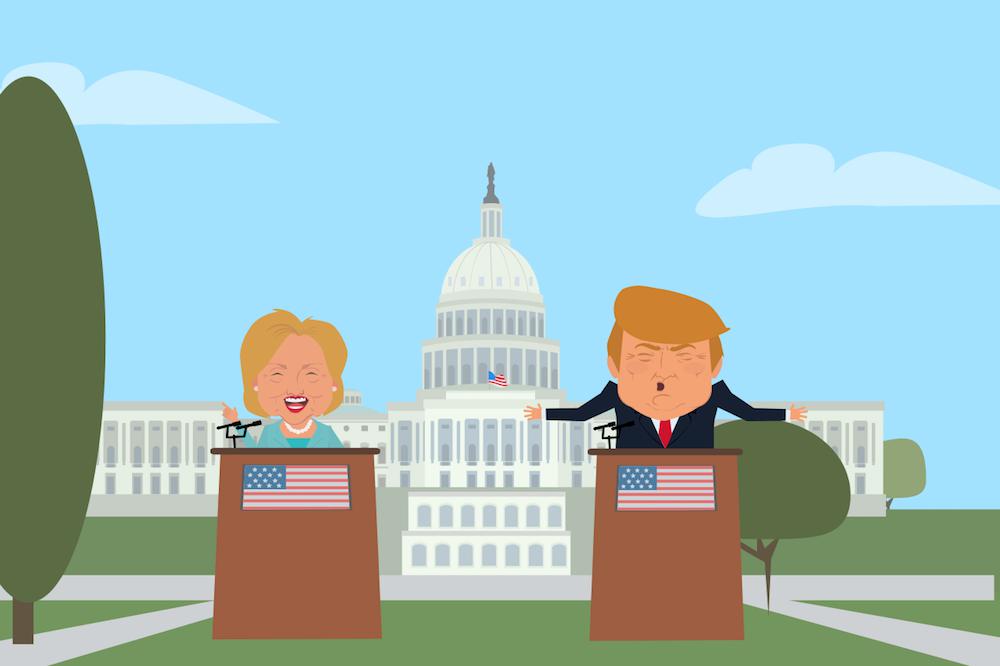 Animatron, an online animation maker, has just released a new set of animated political front-runners, figureheads, celebrities, media minds and stereotypes. The set includes over 50 characters, props and backgrounds, all of them strikingly resembling real life figures.Of the company’s recent release, Animatron CEO Dmitry Skavish said, “We are very excited about this new addition to the Editor. The 2016 US elections have been very controversial so far. We want to give our users an opportunity to express their own opinion on the topic and create videos featuring the season’s political candidates.”The preparations took several months. The set was designed by an Israeli animator. Other preparations included implementing a new walk-through guide to familiarize users with the set upon opening the Editor.The new Political Set can be used for creating own animated political cartoons, teaching about politics, history and US elections, as well as creating any other types of visuals, including images, GIFs and videos. The company hopes it will be used by journalists and bloggers as well as seasoned cartoonists when covering the 2016 US election. The company also points out that the set is open for anyone to use and encourages its users to create their own animations with the set.Animatron is an online tool that empowers users to create animations, explainer videos, banners, animated infographics, GIFs and presentations. Started in 2013, the tool is widely used by designers, marketers and educators from around the world.2 Seaport Lane, Suite 8C, 8th Floor, Seaport East Boston, MA 02210

05-02-2019 | Politics, Law & Society
The Business research company
Political Organizations, Unions And Associations Industry Analysis
The political organizations, unions and associations market consists of the sales and donation revenues of entities (organizations, sole traders and partnerships) that promote a political platform or set of policies or the civic and social interests of their members. They include civic and social organizations, business associations, professional organizations, labor unions and similar labor organizations, political organizations, and other similar organizations. These organizations may also operate social establishments such
08-24-2018 | Politics, Law & Society
NPAC
Future of Political Consulting in India
24 August 2018, Hyderabad - Political Consulting in India is slowly gearing up and creating an Impact in India Politics but lacking the standards like in U.S and U.K where its impact is seen not only in election management but also in Policymaking. Political Consulting is a new emerging industry and Politicians are eyeing these services to have a sure shot victory. In this industry which is in a very
03-22-2016 | Health & Medicine
FWF - Austrian Science Fund
Vaccination policy: Understanding political processes
Health topics polarise people. Funded by the Austrian Science Fund FWF, a research project relating to HPV vaccination demonstrates to what extent important decisions are informed by politics. How do political measures reach maturity? Who are the players? What are the circumstances determining whether new strategies are introduced or not? How are decisions made at political level translated into practice? Using the example of health-policy measures, the political scientist Katharina
08-05-2011 | Politics, Law & Society
Popvoc
Popvoc enables exciting new online political networking
Vox Publicus, LLC of Cincinnati, Ohio announces the launch of its flagship product, Popvoc.com, the exciting new service giving a fresh voice to the American people. Now every American, without regard to political party or social class, has access to this powerful new way to tell today’s leaders what they’re thinking, and in a big way. With Popvoc’s unique and easy to use website, www.popvoc.com, Americans can now find others who
10-22-2009 | Tourism, Cars, Traffic
Cliewe Stadtführungen
Berlin Wall tour with former political prisoner
20 years ago the Berlin Wall came to and end. It came as a surprise to Cliewe Juritza. In 1984, he tried to leave the GDR and was arrested in the attempt. He was sentenced to 12 month in prison and was able to leave jail after 10 month – the Federal Republic of Germany had paid money for his release. He lived in West-Berlin when the Wall fell. Today
05-26-2008 | Politics, Law & Society
Gabrielle Birchak
Petite Pundit Packs a Political Punch
Washington DC political satirist breaks out in a nationwide competition WASHINGTON – Local comedy writer Gabrielle Birchak is a Grand Prize winner in Project Breakout’s nation- and Canada-wide Political Pundit Competition. As winner, she will represent Project Breakout as a field reporter during the national political conventions. “Winning this is an absolute honor,” said Birchak. “It feels a little surreal. I never thought that being a nutcase on the Internet would
Comments about openPR
OpenPR ist the nicest and most clearly laid out PR platform I have seen to this day. The press releases are displayed very nicely and clearly and without any unnecessary frills. The updates are fast and the finished release looks appealing and is clearly legible. Even with 16 years of experience one discovers new things from time to time. Congratulations!
Gabriele Ketterl, Director Marketing & PR, Menads