Get PokeFit - Let Your Monster Hunt be Your Personal Workout 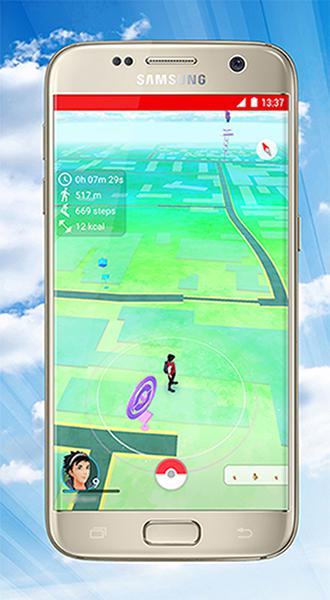 Aachen, August 1, 2016 – P3 the consulting, management and engineering services company that has become the global authority on mobile data usage, announced the launch of PokeFit for Pokémon Go, a new smartphone app that turns your monster hunt into a personal workout challenge. Pokémon Go “trainers“ can download the free PokeFit app at Google Play™ for Android™ and map their routes while capturing calories, distance, step count and duration for every hunt. It also tracks data usage and battery drain to extend both your battery and your budget. In addition, PokeFit can override the device timeout setting to keep your screen on while you play.“Now that gamers are up and moving, they want to take their training and competition to the next level,” said Ralf Klüber, CEO of P3 insight. “Our analysis shows that power Pokémon Go players are walking nearly 5 kilometres each day. PokeFit combines the features of a fitness tracker, a battery widget and a data usage monitor into one easy-to-use app that plays when you do.”When you’re logged into Pokémon Go, PokeFit displays your personal fitness statistics as a small semi-transparent overlay right on the augmented reality display of your mobile device. Or simply open the PokeFit app to view all your stats. Once installed, the app works automatically; no need to start or stop recording manually. PokeFit settings can be customized to record by session, day, month or from day one of your Pokémon Go play.“Early adopters already love the Pokémon Go screen overlay and the fact that it keeps their screens on,” Klüber said. “ And, there’s no need to start and stop the PokeFit app before each hunt. Unlike other fitness trackers, it starts automatically.”P3’s analytics division, P3 insight, has extensive experience in collecting, storing and analyzing huge amounts of data. Just days after Pokémon Go became available in the U.S., amid rising fears that players would max out their data plans, P3 drew upon its global panel of smartphone users to analyze real usage patterns. “We found that Pokémon Go burns calories but it will not burn through your data plan,” said Ralf Klüber. “The average player only consumes between 5 to 10 megabytes of data per hour and that rate has remained consistent over the past two weeks. That’s tiny compared to watching an hour of HD video, which consumes hundreds of megabytes. On average, a Pokémon Go player spends 3 minutes per session for a total of 13 minutes per day.”Klüber acknowledged that battery drain is the real issue. “When compared with some of the most popular mobile apps, Pokémon Go clearly has the highest battery drain rate. It drains nearly a third (29.7 percent) of an Android phone’s battery in one hour, compared to 20.8 percent for Google Maps, 18.2 percent for Facebook and 17.6% for YouTube,” he said.Current plans for PokeFit updates include new game features that will allow players to compete with friends and family to advance their fitness levels and earn rewards..PokeFit is not associated, affiliated, endorsed, sponsored or approved by ©Niantic (developer of Pokémon Go) or ©Pokemon Company.To download PokeFit for Pokémon Go and get more information, visit the Google Play Store or http://PokeFit-app.com. Caption: PokeFit for Pokémon Go displays your personal fitness statistics as a small semi-transparent overlay right on the augmented reality display of your mobile device.About P3  P3 is a global consulting, management and engineering services company, with a rapidly growing team of more than 3,000 consultants and engineers working to develop and implement innovative solutions to today’s complex technology challenges. Offering a broad portfolio of services and proprietary tools to the automotive, aerospace, telecommunications and energy industries, P3 adds tangible value that helps clients succeed at every stage, from innovation to implementation. For more information please visit www.p3-group.com.Press contact CREAM COMMUNICATION Bettina Leutner Schauenburgerstraße 37 20095 Hamburg T +49 40 40 113 10 10 p3@cream-communication.com

10-04-2016 | Media & Telecommunications
P3 group
P3 connect Mobile Benchmark to test UK mobile network experience
P3 communications, the international consulting, engineering and testing services company is currently conducting its industry-leading set of benchmark tests on the UK’s mobile networks EE, O2, Three and Vodafone. P3 today announced that the final benchmark will be published in early November, revealing how each operator is performing in key areas to meet growing consumer expectations and highlighting where there are gaps that need to be addressed with further investments. The tests,
06-27-2016 | Media & Telecommunications
P3 group
P3 Boosts Device Services in the UK to Meet the Growing Demand of Mobile Operato …
International Engineering and Consulting Services Company Expands London Office P3 Group, a leading global consulting, management and engineering services company, today announced it is expanding its London office to accommodate the growing demand for device network, engineering and consulting services in England, and is planning for additional offices in the UK in the next few years. P3’s London office opened in 2011 and has doubled its staff over the past 12
Comments about openPR
We publish our press releases on openPR.de because we like people who are "open" - just like us.
Frank Obels, CEO, INCONET - Informationssysteme, Communication und Netzwerkberatung GmbH