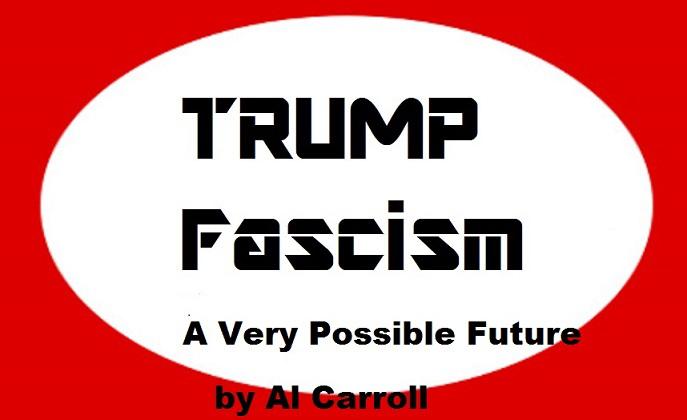 Where Mussolini had blackshirts, Trump would have redshirt stormtroopers.

FOR IMMEDIATE RELEASE: July 13, 2016 HISTORIAN PREDICTS REDSHIRT FASCISM, SECOND CIVIL WAR. Human rights activist predicts Trump’s election would be even worse than the worst predictions. Washington, DC, July 13, 2016 – A dystopian novel by historian Al Carroll predicts the most likely outcome of Donald Trump’s election would be years of repression, economic depression, the destruction of American democracy, disastrous wars overseas, and millions of minorities expelled from the US. And to top it off, Trump’s reign would lead to an outright civil war, with the military the only force strong enough to halt Trump’s fascism. A compelling political thriller, warning, and prophecy, scrupulously researched and carefully based on documented facts, logical exposition, and direct public statements. Trump Fascism is already winning good reviews from readers. “Timely and scary.” “Fascinating!” “All too possible.” “A Tom Clancy for the left.” “Reminds me of Seven Days in May.” Dr. Carroll’s book is newly available at Amazon, Smashwords, Lulu Books, and Book Baby. More information is at www.alcarroll.com, http://trumpfascism.blogspot.com/, and on Facebook’s “Trump Fascism” page. Al Carroll is Associate Professor of US, American Indian, and Latin American History at Northern Virginia Community College, and a former Senior Fulbright Scholar in Indonesia. He is the author or editor of six history books and numerous articles that have appeared in Articles Base, Beacon, Bristle, Counterpunch, History News Network, Indian Country Today, LA Progressive, Raw Story, Southwestern Historical Quarterly, Truth Out, Wall Street Examiner, and elsewhere. He is best known (and often vilified and demonized by racists) for his work as a human rights and anti-racist activist for New Age Frauds Plastic Shamans based at www.newagefraud.org. Dr. Alton Carroll Northern Virginia Community College 12100 Campus Drive, Sterling, VA, 20164 703-507-3958 acarroll@nvcc.edu facebook.com/TrumpFascism/

08-26-2020 | Leisure, Entertainment, Miscel …
Advent Messenger
900 Catholic Masses for President Donald Trump
With only three months to go until the November 3, 2020 presidential election, the Trump 2020 campaign is working hard to attract Catholic voters. The Trump campaign has a website to court the Catholic vote. It is called Catholics for Trump 2020 and it is motivating Roman Catholics to support the re-election of Donald Trump by appealing to the abortion issue. The website says: “Catholics for Trump will energize and activate
12-17-2018 | Business, Economy, Finances, B …
Calstate Companies
How Trump Buys Real Estate
LOS ANGELES, CA. If Donald Trump did, in fact, purchase Russian real estate, he might have employed the following strategies: First, he would acquire a team of experts to help him. Trump understands the old saying: “If you act as your own attorney, you have a fool for a client.” This could also apply to the person who tries to be his or her own property manager, real estate broker, accountant,
10-05-2018 | Business, Economy, Finances, B …
Project: Return to Work
Port Charlotte volunteer to receive award from President Trump
A Port Charlotte woman is getting recognition from President Donald Trump for her service to an organization that helps thousands of wounded veterans and others find meaningful employment. Fran Nixon, Florida Missions Operations Manager (MOM) for Project: Return To Work Inc. (R2W), will receive the President’s Volunteer Service Lifetime Achievement Award in a ceremony on Sunday, Oct. 7. “Veterans hurt in combat gave up so much for our freedom,” said R2W
05-28-2018 | Advertising, Media Consulting, …
Spire Research and Consulting
The Trump Presidency:One Year On
One year since President Trump took office, what has been the impact for businesses in Asia? Leon Perera, CEO of Spire Research and Consulting, shared his thoughts in The Business Times – Views from the Top section on 27 November 2017 on the impact on global economy. Thus far, Donald Trump’s Presidency has not been bad for the American stock market and the US dollar. However, the expected infrastructure spending and
12-14-2017 | Business, Economy, Finances, B …
Coefficients Co. Ltd.
Trump Promised to Study US and PH Trade Deal
United States President, Donald Trump, committed to studying the proposed free trade agreement (FTA) between the US and the Philippines. As per the presidential spokesperson, Harry Roque, he stated that the US president had promised to look into the FTA proposal during their 40-minute bilateral conference with PH president, Rodrigo Duterte, amidst the ASEAN (Association of Southeast Asian Nations) summit. “The Philippines is appreciative of the General System of Preference (GSP) and
11-15-2017 | Leisure, Entertainment, Miscel …
Over the Rainbow Group
TRUMP SIGNS EXECUTIVE ORDER ABOLISHING THANKSGIVING
Washington, DC – On October 13, 2017, surrounded by smiling, loyal supporters, President Donald Trump signed an Executive Order banning the celebration of Thanksgiving within the boundaries of the United States and its territories. Expressing a desire to bring Americans together by participating in the ongoing wave of calls for historical accuracy, manifested primarily by efforts to remove monuments recognizing treasonous Confederate military leaders from publicly owned properties, Trump stated his
Comments about openPR
We publish our press releases on openPR.de because we like people who are "open" - just like us.
Frank Obels, CEO, INCONET - Informationssysteme, Communication und Netzwerkberatung GmbH