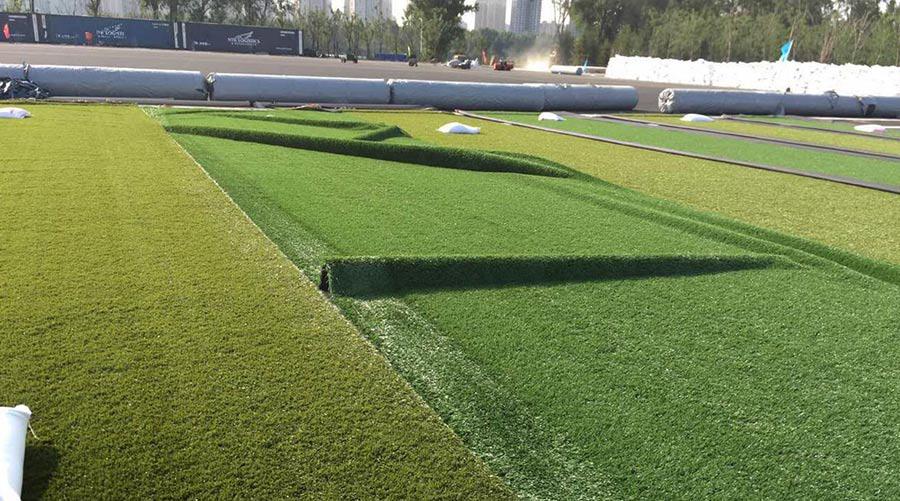 A CCGrass pitch being installed in the Gothia Football Park in Shenyang, China

As the annual Gothia Cup gets set for kick off in Sweden this Saturday, so too in China, preparations are well underway for the debut of Gothia Cup China, to be held from 13th to 19th August, 2016 in Shenyang, the capital of the country’s northern eastern province of Liaoning.The Gothia Football Park is located in Heping District of Shenyang, over a total area of some 860,000 square metres. To meet demand, and to ensure a successful hosting of the Chinese version of the world’s largest and most international youth football tournament, 34 artificial grass pitches were required to be installed, and in record time too.Under government tender, CCGrass beat off competition from other artificial grass manufacturers to be selected to be the exclusive turf provider for the Gothia Cup China. The installation of the 34 pitches began as recently as 22nd June, and is scheduled for completion on 25th July, more than two weeks ahead of the tournament’s opening.The award of such a large contract reaffirms CCGrass’ position as the world number 1 producer of artificial grass; likely no other manufacturer has a factory capacity able to fulfil such an order, within a short timeframe.The product selected for the pitches is CCGrass Stemgrass. With a “spine” running through the middle of each blade, Stemgrass is valued for its durability. After 50,000 cycles of Lisport rolling, it does not show any signs of diverging or splitting. The surface is resilient enough to allow natural ball behaviour, give uniform traction and reduce shock to the joints and ankles. Find out more about Stemgrass at http://www.ccgrass.com/index.php/en/products/sports-grass/for-footballDating back to 1975, the annual Gothia Cup in Sweden shall open this Saturday, 17th July. As the world’s largest and most international youth football tournament, each year, a staggering 1,600 teams from 80 nations take part, playing 4,500 games over 110 fields.It is the teams, and participants from around the world that make the tournament unique; a meeting place for the world’s youth, irrespective of religion, skin colour or nationality, with football as the common denominator.CCGrass, the largest manufacturer of artificial grass in the world, is dedicated to providing the best artificial turf for both athletic and landscape purposes. After more than 10 years of focused development, CCGrass products have served clients from multiple regions with varying needs, including professional football clubs, government bodies, schools, and countless households around the world. CCGrass products have been installed in more than 90 countries with a total volume of more than 90,000,000 m².Add: Floor 19, Dadi Building, No. 56 Huaqiao Road, Nanjing, Jiangsu, China Media Contact: Mr. Deng Hua

05-28-2021 | Sports
CCGrass
FIFA Quality Field for the Frajanas Municipal Stadium in Spain
CCGrass(CCGrass.com), the world’s largest synthetic turf manufacturer, and FIFA Preferred Producer, has recently completed a FIFA Quality pitch for the Frajanas Municipal Stadium (ESTADIO MUNICIPAL FRAJANAS) in Spain. The installation of a new artificial grass in the Frajanas sports complex is a work of improvement action with the fundamental objective of responding to a manifest need for the various sports groups and users. It is about readapting the football field with the
01-31-2018 | Sports
CCGrass
CCGrass Appointed as FIH Preferred Supplier
CCGrass, the world’s largest producer of artificial turf products is delighted to announce that the International Hockey Federation (FIH) has confirmed CCGrass’s appointment as an official FIH Preferred Supplier. The Preferred Supplier status is aimed at ensuring only the highest quality hockey pitches are installed, no matter what level of play is required. Within the FIH Quality Programme, being a Preferred Supplier is the highest honor achievable and only goes to
01-24-2018 | Sports
CCGrass
Press Statement
CCGrass, the world’s largest producer of synthetic turf is pleased to announce the appointment of Bryn Lee as Chief Executive Officer ('CEO') for the new European office, to be opened shortly in Frankfurt am Main, Germany. Bryn Lee joins CCGrass having previously been Managing Director at TigerTurf EMEA and Global Business Director for Bonar Yarns, where he helped establish and implement long term sales and marketing strategies. Bryn has also been
01-11-2018 | Sports
CCGrass
CCGrass Introduce New Yarn Innovations at FSB Show
World leading synthetic turf manufacturer CCGrass announce the introduction of three new yarn additives into their extensive product portfolio With a full range of products designed, tufted and backed before delivery into the global sports and landscape market, CCGrass is well placed to understand special situations that occasionally arise. In the development of unique additives that are applied within its yarn, CCGrass now has systems that are designed to cope with

03-09-2016 | Sports
FC Richmond
FC Richmond Scores Big with adidas® Partnership
RICHMOND, VA - FC Richmond and the Club Champions League (CCL) announced today that they have signed a partnership with adidas® and, through that, now receive Generation adidas® (GA) and Generation adidas® International (GAI) benefits. The partnership, which begins at the start of the fall 2016 season, establishes the CCL as the first and only Generation adidas® league in the history of adidas®. FC Richmond is Central Virginia's only CCL
Comments about openPR
OpenPR is clearly structured and remains true to its principle of confining itself to the essential parts. OpenPR has proven to be a very good and reliable partner to our media agency: Within the shortest time the releases are online and go down well with the media representatives. The success of OpenPR is reflected in the steadily increasing number of press releases. It is good that OpenPR exists!
Ursula Koslik, Director Marketing & PR, F+W Hamburg