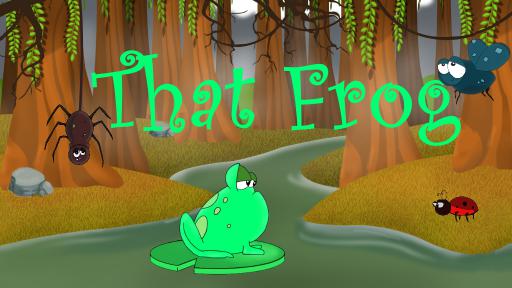 That Frog on Kickstarter

Arlington, VA. May 26, 2016. Pixabits LLC has launched a Kickstarter campaign for That Frog, a game #MadeWithUnity by video game design and computer science students from George Mason University in northern Virginia. That Frog is a casual mobile game whose central character is a crotchety frog that can’t be bothered to do much other than eat bugs… lots of bugs. The game’s single handled gameplay mechanic makes it ideal for mobile and casual gamers, but to the students its about more than just the game. “Mobile games need character… personality. Gamers get tired of a simple game mechanic quickly, but a character with depth can keep people engaged for hours. We’re trying to create a new character that gamers can relate to and engage with” says student and Lead Artist Josh Emswiller, a Senior in GMU’s Computer Game Design program. Pixabits will use the funds from Kickstarter to complete That Frog by providing summer jobs for the student developers to finish the game while school is out, as well as add more details and features to the game to engage the audience not just with a new game, but with a new character… That Frog. Kickstarter backers can get their names in the game’s credits, free game downloads upon completion, a That Frog t-shirt, and even a That Frog figurine. Game completion is scheduled for Fall 2016. The campaign is at bit.ly/kickthatfrog.Pixabits LLC is an indie app and game developer located in Arlington, Virginia. Other projects include Bruz Cruz, a political boxing game, and the forthcoming Thump Trump. Contact: Ross Dannenberg, Pixabits LLC, ross@pixabits.co.Ross Dannenberg, Sr. Advisor Pixabits LLC 3805 18th St. N Arlington, VA 22207 ross@pixabits.co www.pixabits.co

12-11-2020 | Advertising, Media Consulting, …
GLOBAL INFO RESEARCH
Global Frog Compactors / Frog Rammers Market Overview Report by 2020-2025
Scope of the Report: The global Frog Compactors / Frog Rammers market size is expected to gain market growth in the forecast period of 2020 to 2025, with a CAGR of xx%% in the forecast period of 2020 to 2025 and will expected to reach USD xx million by 2025, from USD xx million in 2019. Market segmentation Frog Compactors / Frog Rammers market is split by Type and by Application. For the
09-08-2020 | IT, New Media & Software
FrogData
Frog Data launches AI Factory for Automotive
San Francisco, CA.— (September 8, 2020)- San Francisco based Frog Data launches the Automotive Industry’s 1st AI Factory designed to provide big data based AI solutions. The FrogData AI Factory is the automotive industry’s first Artificial Intelligence (AI) Factory for retail operations. Built on a big data platform and driven by software algorithms, the FrogData AI Factory will change the way dealerships operate in the future. The FrogData AI Factory
08-07-2017 | Leisure, Entertainment, Miscel …
OZUMA LLC
Fans of Zuma Frog Can Cheer
All game addicts, who can't imagine their lives without entertaining adventures of Zuma frog, now can easier find new and exciting adventures, as thanks to new gaming resource. With the new opened website they can dive into magic world of snaky roads and multi-colored balls, which should be eliminated from the screen as soon as possible, at any time of day or night. Pages contain gorgeous collection of games, which
03-30-2016 | Industry, Real Estate & Constr …
CAS DataLoggers
Isodaq Frog RTU Designed for Borehole Monitoring
Frog RX GSM/GPRS Datalogger Transmits Real-Time Data via Modem CHESTERLAND, OH—March 28, 2016 Ideal for borehole monitoring and other water monitoring applications, the Frog RX GSM/GPRS Data Logger is a rugged IP68 field telemetry device with a difference—it’s designed for rapid deployment at a low cost. The FROG RX is a remote outstation to monitor water level or flow and also generates alarms for borehole level, heavy rainfall, flooding and more. Customers
12-10-2011 | Science & Education
Spotty Green Frog
Louis the Frog Launches a Writing Competition for Schools
Louis the Frog is the mascot of his own website www.SpottyGreenFrog.co.uk. He has launched a story writing competition for children. Prizes for the schools are 4 prizes of £100 to spend on the Spotty Green Frog website plus runners up prizes of £25 (also to spend on the website). The children who win the prizes for their schools will receive individual prizes as well relating to gardening and the
12-10-2011 | Business, Economy, Finances, B …
Pacific Crest Group
Pacific Crest Group helps Blue Frog Quadruple its Profits
Interim CFO Services Help Custom Embroidery and Commercial Screen Print Company Master Key Performance Indicators to Promote Growth. LARKSPUR, Calif. (December 06, 2011) -- Pacific Crest Group (http://www.pcg-services.com), the Bay Area service firm that optimizes finance, human resources, and IT so their clients can build their business, has just completed a project for Blue Frog, a commercial screen printing and embroidery company in San Leandro, California, that has resulted in a
Comments about openPR
9 o'clock: discuss press release with client, 10 o'clock: submit release to openPR, within the briefest possible time release is published and displayed in a prominent place on openPR.de. I am thrilled!
Zehra Spindler, Calypso Now! - Communication Agency