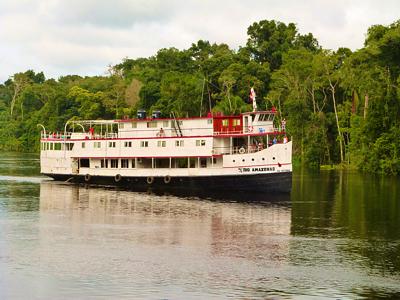 In the 24 years GreenTracks has been offering Amazon wildlife cruises, the trend has unfortunately been one of increasing levels of “luxury” and soaring prices. Whereas years ago we could travel on an inexpensive yet comfortable riverboat to remote areas, see plenty of wildlife and see no other people but remote riverside villagers that found us as interesting as we them, now it’s not that easy to do. Today high-end luxury riverboats seem to cater more to the cruise-set rather than wildlife and nature enthusiast. Gourmet sculptures of food too pretty to eat that you might find in a New York restaurant are now a selling point for these vessels. It seems we are being insulated from the real world, numbed with drinks in our Jacuzzi, rather than experiencing the historic real Amazon.In light of this trend, we are pleased to inform you of a couple of Amazon cruises being offered on a historic Amazon vessel, owned and operated by a wildlife biologist that harken back to an experience near to the best of those cruises years ago. The food of regional and international dishes is good. The Victorian period style boat is comfortable. You’ll have an air-conditioned cabin to sleep in and showers with hot water. Wildlife viewing excursions by boat and walking.Only 2 dates are currently offered: October 1 – 5, 2016 October 28 – November 1, 2016And the price? We hope this turns out to be a new trend! Low! $899 per person in a Triple or Quad cabin. Great for 3 or 4 person family or friends. $1,160 per person in a Twin-Share Double cabin, perfect for couples. $1,500 in a Single cabin.Check this out: http://www.greentracks.com/Rio-Amazonas-Cruise.htmlGreenTracks provides the finest nature and culture-oriented trips into tropical regions of Latin America. Founded in 1992 by prominent tropical biologists, GreenTracks has delivered memorable adventures with expert guidance to thousands of vacationers.GreenTracks, Inc. George Ledvina 416 County Road 501 PMB 131 Bayfield, CO 81122 970-884-6107 info@greentracks.com

09-09-2011 | Tourism, Cars, Traffic
GreenTracks, Inc
Magical Christmas in Cuzco with GreenTracks
The ancient Inca capitol of Cuzco blends a traditional Christmas with the Andean culture to provide a unique and magical setting for an unforgettable experience. As Christmas approaches hundreds of artisans gather in Cuzco’s Plaza de Armas for one of the largest craft fairs in Peru, the Santuranticuy market, on December 24th. The Santuranticuy (meaning Saints for sale) market harks back to the days of the Spanish conquest and

07-31-2020 | IT, New Media & Software
Ispirer Systems LLC
MIGRATION TO AMAZON RELATIONAL DATABASE SERVICE (AMAZON RDS)
More and more companies from small business to large corporations are already using cloud services. Businesses which plan to switch their current digital infrastructure to cloud, often focus on Amazon Web Services, one of the biggest cloud platforms. AWS cloud service is more popular than its nearest competitors. Migrate and make gains Notwithstanding the business area, companies of every size have already realized the advantages of cloud data management. Every company has
09-13-2017 | Business, Economy, Finances, B …
Revanthinfotech
Amazon Account Manager
Revanth Infotech is successfully delivery e-commerce solution to many marketplace vendors. They specializes in providing a complete ecosystem for achieving higher sales on Amazon & other E-commerce platforms. It is an one stop solution for setting up, running and growing your business on Amazon & other e-commerce marketplaces without compromising your existing business.By precise strategies, they tailor-out to suit any marketplace business, by analysing competitor data to beat them at
03-18-2016 | IT, New Media & Software
Amazon MWS API
Launches Amazon MWS API for Amazon Sellers
Amazon Marketplace Web Service (MWS) is an incorporated web service API that permits Amazon venders to automatically trade information on orders, requests, pricing, reports, and that's just the beginning. We can provide merchants some assistance with growing their business. By using Amazon MWS API, sellers can expand offering effectiveness and enhance reaction time to buyers. Utilizing MWS, you can make applications that plan and download orders for satisfaction, affirm shipment,
06-08-2011 | Energy & Environment
Global Forestry Investments
Split Opinions Over Amazon Forest
Protecting the Amazon rainforest has never been more important with Brazil’s lower house passing the legislation that loosens restrictions on farmers using their land. The decision has been met with a split in opinions from farmers who welcomed the chance to produce to full capacity, and environmentalists, worried that there will be an increase in deforestation. Greenpeace reported a skyrocketing 570% increase in deforestation; however with the changes in the ‘Forest Code’,
02-18-2011 | Business, Economy, Finances, B …
Panelwarehouse.com
Panelwarehouse.com Joins Amazon Marketplace
Manchester, United Kingdom (11 February, 2011) - Panelwarehouse.com, a leading manufacturer and supplier of display and exhibition stands, join Amazon Marketplace and now feature hundreds of items in the office products section. Panelwarehouse.com has been providing a range of office screens, display stands and desk partitions for over twenty years, and they have been trading online since 2003. They have since established themselves as a company which offers high-quality office products
02-01-2011 | Tourism, Cars, Traffic
Greentracks, Inc.
Amazon Camping Trip with GreenTracks
The GreenTracks Amazon Camping program is a unique opportunity to experience the Amazon rainforest up close and personal. This program starts with 2 days at a rainforest lodge, 4 days camping in the Pacaya Samiria National Reserve of Peru, and 1 final night at the lodge. On the way to the lodge by boat you will stop at a 100-foot tall observation tower to see the confluence of the two
Comments about openPR
9 o'clock: discuss press release with client, 10 o'clock: submit release to openPR, within the briefest possible time release is published and displayed in a prominent place on openPR.de. I am thrilled!
Zehra Spindler, Calypso Now! - Communication Agency