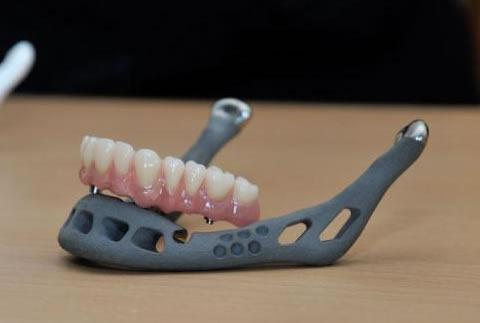 San Diego, CA - (M2 Presswire – May 24th, 2016) - Titanium has become a firm favorite for the medical and aerospace industries, but a worrying report from Carnegie Mellon University suggests that 3D printed titanium could be fatally flawed.

Deep X-rays have revealed a porosity to the material in 3D printed titanium that can be traced back to its powder-based production method.
Carnegie Mellon University is one of the world leaders in 3D printing research and has produced some stellar research over the years. It took the most common form of titanium, Ti-gAI-4V, to the U.S. Department of Energy’s (DOE’s) Argonne National Laboratory. There it analyzed the material with so called deep X-rays, or intense synchrotron x-rays, and an advanced rapid imaging tool.

“Like any other metal, titanium has a certain amount of fatigue resistance until it cracks or breaks,” said Hasit Vibhakar. “The more porosity in the printed metal, the more its resistance to fatigue is decreased.”

Titanium is now preferred for prosthetics, bone implants and airplanes. That is due to its reliability, resistance to corrosion and outright strength. So this is a worrying premise.

3D printing titanium alloys has been hailed as a technical revolution. It reduces waste, cost and allows us to produce tailored designs for joint replacements, dental implants and more. Current powder-based printing methods result in a more porous metal, though, which means it’s more likely to fail than forged alternatives.

It’s less of a concern in a hip replacement or other bone implants, because titanium in any form is certainly stronger than the bone it replaces. Aerospace components have to endure massive stress, though, and it is this kind of force that could present a problem. With so much riding on each and every part, it might make some companies reconsider using 3D printing for mission critical components.

Titanium powders are generally used in combination with a Selective Laser Melting printer or an Electron Beam Melting process. This study focused on EBM and the way it melts the powder.

Inevitably, gas is trapped in the resulting liquid layer and creates pore-like bubbles that can range from a few microns to a few hundred across. They are randomly distributed, too, which means it only takes a few large pores to line up and you have a potential fault line.

“We can observe hundreds or even thousands of pores at a high resolution of about two microns,” Hasit Vibhakar said ominously.

The power, speed and spacing of the beam can all have an impact on the porosity. Each technique has its own benefits, but these new findings could mean that we change the way we print titanium and other metals.
Unmelted powder can increase porosity, but too much powder can leave deep voids. So there is a sweet spot that can minimize the amount of pores in the titanium. According to the researchers, though, it is almost impossible to eliminate them.

This study has potentially grave consequences for the industry as a whole and it certainly means that mission critical components may have to be checked more often for any signs of a failure. But there is a potential solution.

The CMU team will now look at the powder itself to see if there is a way to reduce porosity at the powder stage. Even changing the compound could be an option.

“Technology has moved at a frightening rate in the 3D printing world and we are inevitably going to find issues along the way. Now CMU has identified this one, the industry will almost certainly find the solution,” stated Hasit Vibhakar

Hasit Vibhakar is an Industrialist specializing in strategic direction and growth. A seasoned c-level business executive with many years of proven track record of building enterprise value and shareholder value. He has successfully started eight technology, industrial and manufacturing enterprises and all have been successfully acquired at premium multiples in the industry. Prior to being a serial entrepreneur he has been employed with leading aerospace, telecom, technology, industrial and supply chain based companies.

You can edit or delete your press release Is 3D Printed Titanium Fatally Flawed? here

05-25-2016 | Health & Medicine
Hasit Vibhakar
Rapid Prototyping and 3D Printing Making a Mark in Dentistry
San Diego, CA - (Open PR - May 24th, 2016) - Like many other branches of medical science, the various forms of additive manufacturing such as rapid prototyping and 3D printing are making a significant position in dentistry. Today, millions of orthodontic braces, dental crowns, bridges, etc. are being made with the help of 3D printing. These are being produced with the help of game changing industrial 3D printers which
05-10-2016 | Industry, Real Estate & Constr …
Hasit Vibhakar
Caterpillar Announces Grand Opening of 3D Printing & Innovation Accelerator.
Mossville, Illinois--(OpenPR – May 10th, 2016) - Global construction firm Caterpillar NYSE: CAT Stock: $CAT has opened a suite of three new innovation spaces at its Global Research & Development Center in Mossville, Illinois. The suite will help to “fuel the future, driving even greater collaboration, innovation and acceleration” within the company. As the world’s leading manufacturer of construction equipment, Caterpillar provides an incredibly diverse range of products through its global
05-10-2016 | Business, Economy, Finances, B …
Hasit Vibhakar
Stratasys to release Q1 earnings Week of May 9
TUCSON, AZ--(OpenPR – May 9th, 2016) - 3D printer maker Stratasys (Nasdaq: SSYS) will report its first-quarter results on May 9. The company will post its results before the market open, with analysts expecting a loss of 15 cents per share. During the same period last year the company earned four cents per share, and the stock is down 9.4% on the year. Technical Analysis $SSYS was recently trading at $20.58, down
05-09-2016 | Energy & Environment
Hasit Vibhakar
New Study Shows Manufacturing Demand for Natural Gas Will Grow.
TUCSON, AZ--(OpenPR – May 9th, 2016) - Today, the National Association of Manufacturers (NAM) Center for Manufacturing Research and IHS Economics released a new comprehensive study that reveals how natural gas has strengthened manufacturing and encouraged U.S. manufacturing growth and employment and highlights the positive impact to communities around the United States. Manufacturers use natural gas for fuel, such as drying, melting, machine drive and space heating, and as a