Only one Yes! Putter used among the top 35 at the SAA Open, but it was THE one 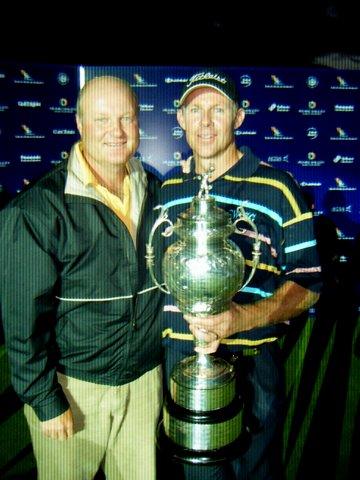 Heartfelt congratulations from all at Yes! Golf to 42 year-old South African James Kingston, who reached an emotional career highlight at the SAA Open in Pearl Valley last weekend when he walked away with winner’s trophy. Two particular members of the Yes organization worldwide had a hand in putting the Callie Putter into James’s hands and keeping it ‘rolling them pure. "James took the Callie at the Madrid Open last October," recalls Yes! EU Tour rep and Harold Swash director of instruction Phil Kenyon. "He was using a belly putter at the time but took a Callie for practice. This led to a conversation about technical issues, which eventually then turned into a proper lesson. "For the first round in Madrid, he stuck to his belly putter. He shot 77. In the 2nd round, however, he brought out the Callie and new technique and shot a course record to make the cut. I believe he's used it ever since." Going into the final round, Kingston and Englishman Oliver Wilson were joint leaders of the 15 last-day players. Wilson produced a bogey-free 67 to overtake Kingston, who led by one overnight, with the seven-time Sunshine Tour-winner having a challenging day but hanging tough for a one-under 71 that left him one stroke behind the Englishman. A double-bogey six at the 17th was a telling mistake by Kingston, who admitted he made a "bad mental error". He drove into the bunker when he had been considering using an iron instead of a wood and then went for the green because he felt he had a good lie. But in almost a perfect replica of Kingston's encounter with Yes! in Madrid, South African Yes! stalwart and distribution chief for the Asia-Pacific region Wayne Farrell saw James at the driving range on the fourth day. It's not a Putter, it's an entire Putting Systems. And Yes!... it travels well too. "James was the last one to come off the range after the rain started and we spent some time together just focusing on his putting," explains Farrell. "I think what he got out of it was that the putters and coaching I give exactly matches what my colleague in Europe would have given - or anywhere else in the world, for that matter. "When a Tour pro approaches us on the putting greens, he gets tremendous consistency of service... they're the same precision-engineered putters with the unique C-Groove in the face, along with the same proven putting methodology that Harold Swash still teaches to this day, and is licensed to a growing number of Harold Swash Putting School of Excellence Instructors all over the world. And that consistency is a huge advantage when players are under pressure. "James couldn't have chosen a better time to reach his true potential. It's his national competition but it's also the 2nd oldest golf tournament in the world." Farrell joined a host of dignitaries - including mayor of Cape Town Helen Zille and the head of the South African PGA - who wanted to honour Kingston at the presentation ceremony later in the evening. Yes! Golf 7808 Cherry Creek South Drive, Suite 103 Denver, CO 80231 www.yesgolf.com Press contact person: Dominic O'Byrne, dominic@obyrne.co.uk or Swash Putting Schools Asia/Pacific, Australia, South Africa, Middle East Oakrig House Canning Road Southport Merseyside England United Kingdom PR9 7SW Press contact: Michel Monnard, C./Llum 10, 07580 Capdepera (Mallorca/Spain) Email: michel@swashputtingschools.com Phone: 0034 639635634 About YES! Golf Yes! Golf, based in Denver, Col., is the proven leader in grooved putter technology. Harold Swash, known as the European putting doctor, introduced the innovative theory of concentric grooves in 1995. Today, C-Groove putters are taking the golf world by storm making Yes! Golf one of the fastest growing putters on the professional tours. For more information on Yes! Golf call 800.845.4327 or www.yesgolf.com About Harold Swash Putting School of Excellence Harold Swash is making his teaching philosophy available for all keen golf teaching professionals who want to learn how to teach Putting better. For more information about The Harold Swash Putting School of Excellence go to www.swashputtingschools.com

You can edit or delete your press release Only one Yes! Putter used among the top 35 at the SAA Open, but it was THE one here