Empire Universe 3 – Fire at Will in the New Content Update 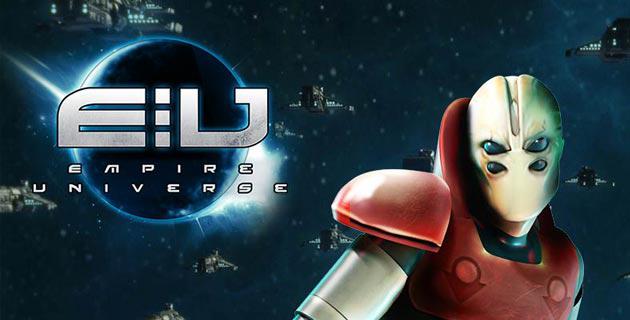 Hamburg, May 12, 2016 – Good news are coming in from outer space: Empire Universe 3, the science fiction strategy game launched in December 2015, will receive a number of additional features and improvements with today's great content update.A cool new, community-requested feature will come in handy for raiding or conquering planets: instead of having to fear hostile takeovers of their fleet, players can now use the new "Save Mode" to easily withdraw their ships to the void and thus shield them from enemies' attacks.The daily login system with its generous rewards is another great addition: From now on, players who devotedly and reliably lead their brigades through the game's endless space can look forward to ample rewards. The more regularly a player logs in to the exospheres of Empire Universe 3, the larger the recompenses out of the universe's infinite treasuries will be.Players who cannot get enough of weightless goodies and extras are invited to master the challenges of the new daily quest system. Various quests have to be solved within seven days – and capable captains can even take on multiple quests at a time and thus fill their treasuries even faster.Also new: the invite friends-system has been improved. It is now possible to recruit allies in all social networks in order to fight enemies together, form strong alliances or find trade partners. Players who successfully invite a friend will be requited with better rewards and numerous convenience functions. Several bug fixes are rounding off the new patch. The official patch notes to the new Empire Universe 3 update are listed in the EU3-Forum. With these new improvements the epic adventures and intense space battles will be even more fun!More information on Empire Universe 3: Patch log - http://www.looki.co.uk/forum/showthread.php?t=410188 Register now - http://uk.empireuniverse.com/About the gamigo group The gamigo group is one of the leading gaming companies in Europe and North America. Over 100 staff members in Hamburg, Berlin, Münster (Germany) and Chicago (USA) are in charge of managing the platform (including Software as a Service and gaming portals) and the publishing of free-to-play mobile and online games. Fiesta Online and Dragon’s Prophet are just two examples of gamigo’s very successful multiplayer online role-playing game titles with a long-standing customer base. At the same time, the existing portfolio of games is constantly expanded with new titles, such as: Wickie Online, Kings and Legends, Desert Operations and Empire Universe 3. The gamigo group has a total of more than 65 million registered user accounts worldwide. In addition to online multiplayer games, gamigo is also stepping up investments in mobile games, including games such as Dino Empire and the cross-platform game The Rats. gamigo was one of the first few companies to discover the booming market segment of online games, and published the first MMOG that was completely localized into German as early as 2000. Besides organic growth, the gamigo group also performed 10+ M&As since 2014 and further strives to grow its business through the acquisition of companies specializing in games and technology.gamigo group Behringstrasse 16b 22765 Hamburg E: pr@gamigo.com T: 040 411 885 – 126/147

05-24-2017 | IT, New Media & Software
gamigo AG
gamigo announces gamer party at Gamescom in Cologne
• August 23, 7 p.m., at "Wartesaal am Dom" • All gamers are invited to sign up in advance and enjoy free entry and drinks on the house • Top Acts: Sarazar, Circle of Alchemists, Rewinside, Defcon Unlimited & more cosplay acts Hamburg, May 23, 2017 gamigo AG ("gamigo", bond ISIN: DE000A1TNJY0) is among the world's leading publishers of community-based free-2-play games with more than 100 million registered user accounts and successful titles like
04-12-2017 | IT, New Media & Software
gamigo AG
Welcome to gamigo's excellent Easter feast
Hamburg, April 12, 2017 – The Easter Bunny is carrying an especially large basket full of surprises this year: all throughout gamigo's games countless eggs have been hidden, Easter baskets are waiting to be found, and lots of colorful minigames want to be solved. In short: extraordinary prizes are waiting around every corner. Want to go on an egg hunt while fighting beastly bunnies? That's exactly what awaits players in Fiesta
12-16-2016 | IT, New Media & Software
gamigo AG
Fiesta Online - The Lost Kingdom – Part one of the great level cap raise is no …
Hamburg, December 16, 2016 – The curtain falls, a new chapter begins: the great Fiesta Online content update, including a level cap raise up to level 135, is available as of now. Filled to the brim with exclusive features and a brand-new story line, this long-awaited patch is another milestone for gamigo's successful anime MMORPG. While players navigate their heroes through newly created landscapes searching for two mythical essences, countless innovations
12-05-2016 | IT, New Media & Software
gamigo AG
Fiesta Online: Part 1 of the New Level Cap Increase Coming in December 2016!
Hamburg, December 5, 2016 – gamigo's successful anime MMORPG, Fiesta Online, is getting the first of two massive updates this December, including a level cap increase to level 135! In advance of the update's release, players can feast their eyes on exclusive screenshots and an all-new teaser trailer. Called forth from the depths of the shadow world by the God of Greed, the fearsome leader of Pagel's dark army has returned.

06-03-2016 | Industry, Real Estate & Constr …
Feltrim Group
StarWars is set to further boost Orlando Disney empire
Orlando’s WaltDisneyWorld is again the world’s number one theme park, the latest industry visitor estimates show. And with the new Frozen Ever After ride opening later this month on Thursday 21 June and the promise of StarWars Land and ToyStory Land, is set to help the Disney empire draw in even more visitors. WaltDisneyWorld attracted 20.4million visitors, up 6% year-over-year, according to the 2015 Theme Index from the Themed Entertainment Association and
02-23-2012 | Business, Economy, Finances, B …
eToro Group Ltd.
eToro awarded Best Social Trading Platform by FX Empire
LONDON, 22 Feberuary, 2012 – eToro, the world’s largest investment network, announced today that the leading website for Forex financial analysis and information, FX Empire, has awarded eToro as The Best Social Trading Platform. The committee of FX Empire, comprised of journalists, analysts and traders decided in favour of eToro's trading platform due to its ability to provide eToro customers with full transparency and control over their investment
06-29-2011 | Fashion, Lifestyle, Trends
Human Empire Shop
International designers create for Human Empire
Human Empire, a Hamburg based design label, lauches a new t-shirt collection. The shirt desings are by international guest artists like Falko Ohlmer (D), Michael Willis (UK), Anton Weflö (S), Tim Lahan (US), Jim Stoten (UK), and Sergio Membrillas (E). All t-shirts are available at Human Empire Shop with immediate effect and, before long, in various streetwear shops all over Europe. Human Empire Shop runs an online shop and a small store
03-02-2010 | Sports
Articulon
Second Empire Grand-Prix Announces Two March Races
RALEIGH, N.C. (February 26, 2010)—The Second Empire Grand-Prix (secondempireseries.com) will include two March races as part of its spring series—the WakeMed Cary Distance Festival on March 6 and the Run for the Oaks 5K on March 13. Both races are USATF-sanctioned and will raise money for local North Carolina charities. Benefiting the Cary Rotary Club, the WakeMed Cary Distance Festival will start at 9 a.m. in front of the BB&T
08-05-2009 | Sports
Nomis Sports AG
EMPIRE OF SPORTS AND NOMIS ANNOUNCE PARTNERSHIP
Empire of Sports, the first virtual world entirely dedicated to sport, and NOMIS, the revolutionary football boot designer and manufacturer, have announced partnership. NOMIS, whose design marks arguably the biggest progression in football boot innovation for decades, will soon be able to demonstrate the amazing performances of its boots to Empire of Sports’ players. The first massively connected multisport 3D game, Empire of Sports is offering players to practice through their
03-12-2008 | Politics, Law & Society
Thompson & Knight LLP
Thompson & Knight Attorney Recognized as "Empire State Counsel"
The global law firm of Thompson & Knight LLP is pleased to congratulate Ira L. Herman for being honored as an “Empire State Counsel” by the New York State Bar Association (NYSBA). He joins a distinguished group honored for their outstanding contribution in providing legal services to the poor in 2007. The “Empire State Counsel” program was created in 2006 to give specific recognition to NYSBA members who provide 50
Comments about openPR
9 o'clock: discuss press release with client, 10 o'clock: submit release to openPR, within the briefest possible time release is published and displayed in a prominent place on openPR.de. I am thrilled!
Zehra Spindler, Calypso Now! - Communication Agency