Providing support for women at sea 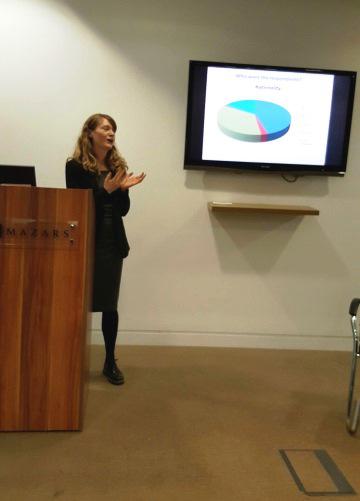 Some relatively simple and low-cost interventions could improve the health and welfare of women seafarers, the WISTA UK AGM was told in London.Caitlin Vaughan, Project Manager, ISWAN – the International Seafarers’ Welfare and Assistance Network - told members that a survey of 600 female seafarers revealed that the main areas of concern were: back pain, mental health, nutrition and gynaecological complaints.Simple interventions to improve the welfare and morale of female seafarers include the introduction of sanitary waste disposal of for all female crew on all ships. Ms Vaughan also called for the improved availability of female specific products such as sanitary products in port shops and welfare centres worldwide. She spoke after WISTA UK members heard how membership had increased from 134 in 2014 to 144 in 2015, and how a chapter in Southampton had been set up, serving the burgeoning Solent maritime hub. In 2016 WISTA UK will be working to establish chapters in Liverpool and Glasgow.Sue Terpilowski OBE, of Image Line, was confirmed as President for the remainder of her two-year term and Rachel Lawton FCA, of Mazars LLP, and Bridget Hogan of The Nautical Institute, were re-elected Treasurer and Secretary respectively.Ms Terpilowski said: “I am proud of our successes over the past year. Not only have we increased membership, and added depth with the Southampton chapter, we also held a series of social events and technical talks.“Our conference during International Shipping Week attracted nearly 300 delegates from 13 countries and it seems the appetite is for more such events in the future.”Julie Lithgow, chief executive of the International Chartered Shipbrokers was WISTA UK’s Woman of the Year in 2015 and members are now choosing their candidate for 2016. Ms Vaughan addressing the AGM, explained that the yearlong health investigation grew out of a concern that medical handbooks and other literature aimed at women seafarers were outdated and failed to consider female-specific health and welfare issues. “If we want to recruit and retain women seafarers then their specific health and welfare needs must be addressed,” she said. There is evidence to show that retention of seafarers is not gender related and ship operators are neglecting a source of potential labour.Women continue to face discrimination at sea with some countries even banning women from enrolling on nautical courses and some employers reluctant to take on women cadets or qualified seafarers.Women are often paid less than men doing the same work and some employers are reluctant to promote women to more senior ranks, Ms Vaughan continued. Women may be denied the facilities or equipment available to men on board and can face bullying, sexual harassment or violence at sea.A study by the UK and Dutch based Nautilus union found that 66% of’ their female members work on ships for more than six years and 19% for over 15 years.“Given that dissatisfaction with prolonged separation from home and family has been reported as one of the most common reasons for male seafarers abandoning a career at sea, the issue of retention applies to both male and female seafarers and should be addressed by the industry,” she continued. “Having women as part of the crew can help reduce the sense of isolation felt by many seafarers and so support overall retention.” Of the 600 female seafarers surveyed, 73% were under the age of 40; 41% were aged 19-30; 32% aged 31-40 with 18% aged 41-50; 8% aged 51-60 years; only two respondents were over 60. Most worked on cruise vessels or ferries; others on cargo vessels or tankers and some on fleet auxiliary vessels. But other ships included yachts; military vessels; education or training vessels and tugs. Countries of those surveyed included Philippines and other Asian countries, Europe and North America. Although the ILO says only 7% of officers are female, nearly half of those in this latest survey were officers.Issues common to men and women seafarers topped the survey: joint and back pain closely followed by stress, depression or anxiety. “The cause of health problems such as back pain and stress need to be studied and solutions proposed. The lack of confidence in the medically trained staff on board needs to be investigated, together with sexual harassment, Ms Vaughan said “We hope the industry will take up this challenge to make life better for all those onboard and benefit from the skills and dedication of female seafarers.”WISTA UK was founded in 1974 and is the oldest of the WISTA national associations. WISTA UK currently has over 140 members and is currently on a recruitment drive.The Women's International Shipping & Trading Association (WISTA) is an international organisation for women in management positions involved in the maritime transportation business and related trades worldwide. It is a major player in attracting more women to the industry and in supporting women in management positions. With networking, education and mentoring in focus, WISTA seeks to enhance members' competence and empower career success. WISTA is growing and currently counts over 1,600 individual members in 34 National WISTA Associations.In 2014 WISTA UK launched the Came by Ship campaign which is designed to raise awareness of the shipping industry and help younger people realise the impact it has on our everyday lives as well as the great potential it holds for career opportunities. The Came by Ship Twitter account now has over 1,200 followers and was nominated for the Maritime Foundation’s 2015 Maritime Media Awards – digital media campaign award. The two competitions are now open – essay and photographic full details can be found online www.camebyship.com @camebyshipImage Line Communications 8 Skylines Business Village London E14 9TS Amy Gregory amy@imageline.co.uk

01-22-2018 | Business, Economy, Finances, B …
business news
Global Darifenacin HBr Market 2018 - Merix Laboratories, Megafine Pharma, Dalian …
The statistical surveying information incorporated into the Darifenacin HBr report is the aftereffect of significant essential and optional research exercises. The report fragments the global Darifenacin HBr market based on makers, item compose, applications, and regions. In this report, each fragment is contemplated completely and measurements are introduced in detail. The report offers an exact outline of the global Darifenacin HBr advertise covering key factors, for example, drivers and restrictions
09-13-2011 | Health & Medicine
Berlin Heart
Berlin´s Medical-Technical Companies: Permanent Secretary Almuth Hartwig-Tiedt …
Berlin, 12 September 2011: The Permanent Secretary for Economics, Technology and Women’s Issues, Almuth Hartwig-Tiedt visited Berlin Heart a few days ago, as part of an information tour regarding the current situation of Berlin´s Med-Tech companies – and particularly, the ventricular (heart) assist device market. Together with the General Management of Berlin Heart, latest therapy options with heart-assist devices were discussed. As Berlin Heart´s EXCOR® Pediatric device for children is unique
Comments about openPR
We publish our press releases on openPR.de because we like people who are "open" - just like us.
Frank Obels, CEO, INCONET - Informationssysteme, Communication und Netzwerkberatung GmbH