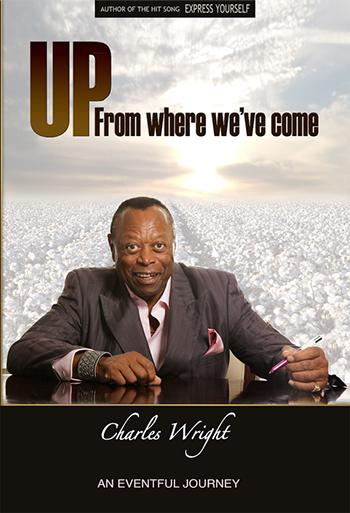 ALONG WITH NEW SINGLE “SHE DON’T BELIEVE IN LOVE,” Get Ready for The Express Yourself Book Signing Tour Borrowed by Dr. Dre, Madonna and Diplo; sampled looped by N.W.A. and themed by the NBA, Charles Wright’s “Express Yourself” has touched the lives of generations since 1970; being deemed the most licensed song. Yes, you’ve heard it on ESPN, Burger King commercials, and numerous movies, the song has taken on its’ own personality to the point it over shadows the creator’s name Charles Wright. In fact, when N.W.A. introduced the song to the hip-hop generation, youth could not believe it was originated by Wright. Wright recalls, “A young man next door came home from work one day blasting “Express Yourself” and I was like, that’s my song. The boy said no, that’s N.W.A!” Not new to Wright, he discovered West Coast’s hottest rap group failed to give him songwriting credit. After calling Ice Cube, Cube apologized and gave him his royalities. Today, Charles Wright continues making history and setting the stories right! With the 1st of several memoirs to come, Charles Wright has released “Up From Where We’ve Come.” While many would think Wright tells the historical facts about his experience in the music industry and the relationships he has and had with various music greats, it makes more sense to start from the beginning and to reveal his life story growing up outside Clarksdale, Mississippi when Jim Crow reigned. Wright’s recall of his relationships with his family, sharecropping, commerce, and racism is an honest, personal account of his life and what he endured as well as thousands of other African-Americans. While the days of slavery were gone, Wright explains how the system of servitude and segregation kept African-Americans in poor states always owing. “Up From Where We’ve Come” tells the story of what we may believe was a hopeless lifestyle yet through changes in circumstances, taking a step in unfamiliar directions can create a life of promise as when the family moved to California.Charles Wrights’ stories continues through his memoirs and his music. With his new release “She Don’t Believe In Love”, Wrights’ funky soulful dance music is creating a buzz again as well as the risque cover. Charles Wright is taking his historic stories and music on tour with the “Express Yourself Tour” starting in California. Fans have an opportunity to meet and greet Wright, purchase an autographed book, ask questions and experience history. Present schedule is: April 30 – Black Writers on Tour June 12 – El Segundo Public Library Book Fair August 20 – Leimert Park Book Fair“Up From Where We’ve Come” and “She Don’t Believe in Love” are available on Amazon but can be purchased by going to: www.expressyourself.net Charles Wright is available for speaking, booksignings and TV appearances. Please contact KimiRhochelle of KRPR Media at krprbooking@gmail.comFor media interviews, features, please email: media@krprmedia.comABOUT KRPR MEDIA: KRPR Media is THE SOUGHT AFTER ENTERTAINMENT FIRM specializing in PR, Entertainment, Branding, Advertising, Social Media Relations, Talent / Artist / Celebrity Relations, and all other solutions. www.krprmedia.comKRPR Media 7426 cherry ave 210-200 Fontana, CA 92336 KimiRhochelle 909-543-2978