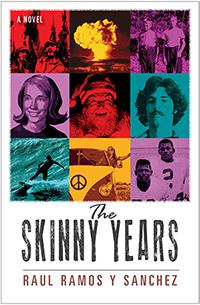 Beck & Branch Publishers will release The Skinny Years, the fourth novel by award-winning author Raul Ramos y Sanchez in June 2016. The coming-of-age period piece is intended for adult readers. Set in Miami during the turbulent 1960s, The Skinny Years follows the travails of Victor “Skinny” Delgado.

A pudgy eight-year-old in 1959 when the Delgados arrive in the U.S. fleeing the Castro regime in Cuba, Skinny’s once-wealthy family moves from a mansion in Havana to a roach-infested bungalow in Miami’s low-rent Wynwood district. Over the next ten years the Delgados struggle to survive in this strange new land. There’s only one constant in Skinny's world as he grows from 8 to 18. He longs in vain for the girl of his dreams: his neighbor Janice Bockman who seems everything American—and everything he’s not.

Laced with humor, the novel’s colorful characters provide fresh insights into the cold war, race relations, American traditions, and the youth counter culture of the sixties through the quirky perspective of a Cuban exile family.

“Some readers will think The Skinny Years is quite a departure from my previous novels,” said Ramos. “The scope of the story is smaller, to be sure. But I believe the essence of my work remains the same. I’d like provide readers with an engaging experience and finish the book feeling that beneath our disparities of culture, color and creed, we’re alike in many more ways than we’re different.”

Launched in 2012, the Beck & Branch list of authors and titles is purposefully short, for the firm operates as a collective. Beck & Branch does not accept submissions, and membership in the collective is limited to authors previously printed by a traditional publisher.