POWERED UP AGAINST AUTISM 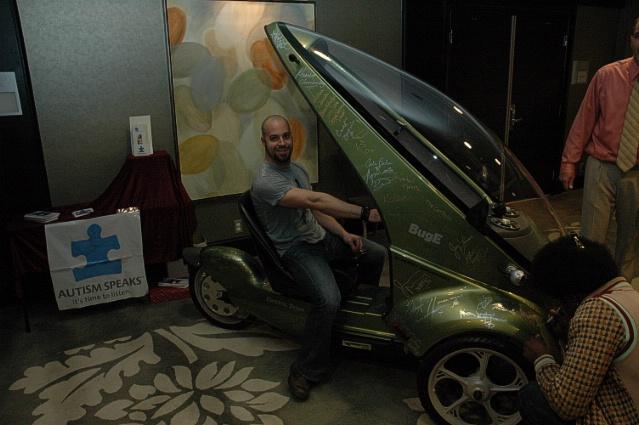 Chirs Daughtry tries out the BugE

Celebrities Come Out For the Cause BEVERLY HILLS, CA., NOVEMBER 17, 2007: Nearly one hundred celebrities powered up and showed their support over two days for the fight against autism by signing a special edition BugE Personal EV Transport. The vehicle, built especially by Harvey Coachworks of Knoxville, MD., will be offered for auction on EBay.com under “AMA Celebrity BugE” from Dec 10th to Dec 20th to benefit Autism Speaks, a non-profit organization dedicated to the fight against autism.The celebrities, in town in preparation for the American Music Awards, including Chris Daughtry, John Legend, Earnest Borgnine, John Salley, and 3-6 Mafia, just to name a few, were extremely gracious and supportive of the cause, many sharing stories of their personal experiences with autism. According to Phillip Hain, Executive Director of the Los Angeles Chapter of Autism Speaks. Autism affects one in 150 boys born in the U.S. today. Mr. Hain also added, “What you really need to know is that a child is born with autism every 20 minutes in this country”. “When approached with the opportunity to auction a BugE for a charity, Autism Speaks was a no-brainer as we have a 3 year old son Mitchell who was diagnosed last year” said Mike Harvey, President of Harvey Coachworks. “It’s been a fun project to be part of and a win/win for everyone. Now, all we need is it to auction it for a good amount of money, so Autism Speaks can reap the benefit” added Harvey.The BugE will be on display at an upcoming Electric Drive Transportation Event EVS23 from December 2-5 before going to auction the following week. -End-Company: Harvey Coachworks Address: 2130A Jefferson Pike Knoxville, MD 21758 Contact: Mike Harvey -President Phone: (301) 841-7865 Email: Mike.Harvey@HarveyEV.comHarvey Coachworks was founded in 2006 to fill a need for high quality EVs. With over 20 years experience in the automotive aftermarket coach and conversion business, we felt we could apply our expertise to the EV industry, and make top quality electric vehicles that people want to drive. Autism Speaks is dedicated to funding global biomedical research into the causes, prevention, treatments, and cure for autism; to raising public awareness about autism and its effects on individuals, families, and society; and to bringing hope to all who deal with the hardships of this disorder. They are committed to raising the funds necessary to support these goals. Autism Speaks aims to bring the autism community together as one strong voice to urge the government and private sector to listen to our concerns and take action to address this urgent global health crisis. It is their firm belief that, working together, we will find the missing pieces of the puzzle.

News-ID: 33277 • Views: 1082
Comments about openPR
Your portal is fast, simple, and easy to use. Others may have more functions but they also demand more editing time, you have to preformat the text in order to achieve a good result etc. I think openPR is really fantastic!
Andreas Knepper, wallmedien AG