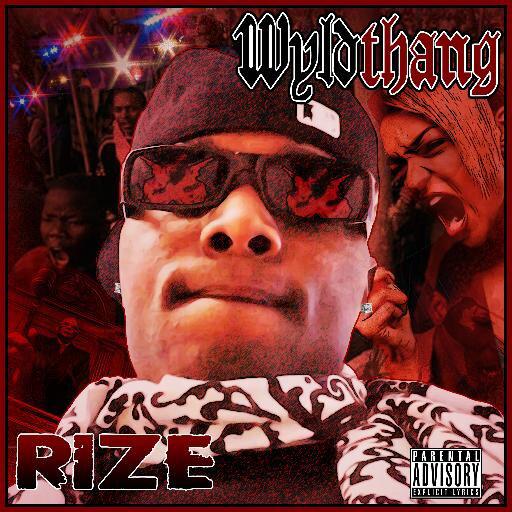 US rap artist Wyldthang placed a advance copy of his forthcoming album RIZE:Screwed & Chopped on Ebay today for the whopping total of $5,000. The special made 24 Karat Gold copy of the CD is a unique offering. "DJ BC of the Screwed Up Click took almost a year putting this album together. The project is reimagined, remastered and reloaded." Wyldthang states, "After all that time and effort that he put into this CD. I feel it's only right to treat it like the work of art it is and give it proper treatment." The idea behind making one copy of the CD 24 Karate Gold hit Wyldthang while he was at a art gallery. After viewing several expensive paintings, he was thinking about purchasing for his home, he asked a sales clerk how prices are derived for paintings. "The sales clerk told me the artist who painted the picture determines the price." Wyldthang states, "Then it hit me. Just like those paintings, THIS CD is a work of art." Robert Davis Jr. aka DJ Screw is noted for creating the screw music genre and birthing some of Houston's greatest rap artist including Lil Keke, Z-Ro & Fat Pat. Since his untimely demise, DJ's across the world have worked hard to mimic the syrupy sounds of the creator. "What people don't know is DJ Screw was a music junkie." DJ BC says, "He would listen to a album 1,000 times, till he knew it backwards and forwards. Till the music became second nature." DJ BC learned first hand from DJ Screw the art of making a quality Screw album. Like a great physician he cut out the items from the original release of RIZE that he didn't want, kept the material that he would work with and then added his own authentic blending skills to create a new sound landscape. RIZE: Screwed & Chopped is available on Ebay up until the album officially drops on April 20, 2016. " I have had a few offers for a thousand dollars from people wanting to buy one or two singles." Wyldthang says, "But you can't buy 1 or 2 singles. It's only one 24 Karat Gold copy of this CD, so you have to buy the whole thing."US rap artist Wyldthang selling 1 copy of 24 Karate Gold CD for $5,000.8829 Lamar St. Houston,TX 77063

03-23-2021 | Health & Medicine
Allied Market Research
Bone Fixation Screw Market
Allied Market Research (USA, Oregon, Portland) Published Latest Report titled, ‘Bone Fixation Screw Market: Global Opportunity Analysis and Industry Forecast 2020-2027’. The Bone Fixation Screw Market is expected to witness growth in upcoming years due to factors such as increase in target patient population, which mostly includes patients suffering from cancer, tuberculosis and cardiovascular diseases. This market research study determines the increase in changes and the aspects which are likely to have
02-13-2019 | Industry, Real Estate & Constr …
Market Density
Global Leading Screw Market Research Report 2018
Global Leading Screw Market 2018 focuses on the essential market factors, industry patterns, showcase elements, driving players, and their confinement. It investigations the basic parts of the Global Leading Screw advertise, exhibiting a best level assessment as far as market fragment, measure, share, sectional examination, and income estimate. Get sample copy of report: https://www.marketdensity.com/contact?ref=Sample&reportid=6476 Table of Contents 1 Leading Screw Market Overview 1.1 Product Overview and Scope of Leading Screw 1.2 Leading Screw
09-06-2018 | Health & Medicine
QandQ Market Research
Bone Fixation Screw Market
Global Bone Fixation Screw Market Research Report 2018 https://www.qandqmarketresearch.com/reports/bone-fixation-screw-market-26 This report studies the global Bone Fixation Screw market status and forecast, categorizes the global Bone Fixation Screw market size value & volume by key players, type, application, and region. This report focuses on the top players in North America, Europe, AsiaPacific, South America, and Middle East & Africa. Bone fixation is a surgical procedure that stabilizes and fix bone grafts and bone filling
07-09-2018 | Advertising, Media Consulting, …
QY Research, Inc.
Screw Press Market: Investment Opportunities & Forecast 2025
Global Screw Press Market Research Report 2018 is a professional and in-depth study on the current state of the Screw Press market. Annual estimates and forecasts are provided for the period 2013 through 2023. Also, a six-year historic analysis is provided for these markets. The global market for Screw Press is expected to reach about 212.53 M USD by 2023 from 170.57 M USD in 2017, registering a Compounded Annual
12-21-2017 | Health & Medicine
Future Market Insights
Bone Screw System Market : Global Trends 2027
Bone Screws, also known as Bone Fixation Screws are medical devices made up of titanium or stainless steel that support internal bone fixation during an orthopaedic surgical procedure. Bone screws are most often used for internal fixation to hold bone fragments together or to affix an implant, e.g. plate, to the bone. The material of bone screws is inert, thus these screws do not cause any irritation or allergic reactions
03-27-2017 | Industry, Real Estate & Constr …
Challenge (Europe) Ltd
What screw head type should I use?
Kevin Moorcroft, M.D. at industrial threaded fastener specialists Challenge (Europe) Ltd recently discussed the question - What screw head type should I use? - with some helpful tips as he explained: “Standard hexagon head is one of the most common form of screw or bolt head used throughout industry in typical sizes from M4 upwards but there are also countersunk screws with recesses of many types, e.g. multi-splined, hexagon socket,
Comments about openPR
OpenPR is clearly structured and remains true to its principle of confining itself to the essential parts. OpenPR has proven to be a very good and reliable partner to our media agency: Within the shortest time the releases are online and go down well with the media representatives. The success of OpenPR is reflected in the steadily increasing number of press releases. It is good that OpenPR exists!
Ursula Koslik, Director Marketing & PR, F+W Hamburg