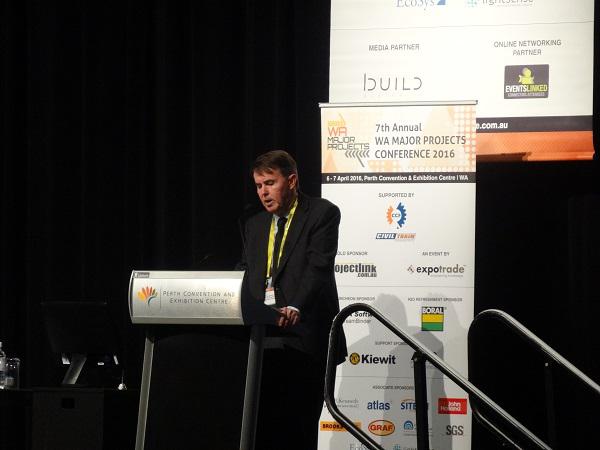 More than 300 people gathered at the 7th Annual WA Major Projects Conference last week to review some of the state’s largest and most significant major projects taking place across the state. In its seventh year running, the conference facilitated discussion around the state’s recent mining boom, which contributed in excess of $40 billion towards the state economy each year. Despite the end of the mining boom, mining still plays a significant role within the Western Australian economy, contributing $42 billion in 2015, as well as attracting 65% of the nation’s total mining investment. The conference entitled “Rebuilding after the Mining Boom” focused on a wide range of infrastructure projects which aim to see Western Australia into the future, as part of the $96 billion being spent in 2016 towards the development of mining and infrastructure projects. With a total of 27 key speakers from a wide range of Chief Executive Officers, Project Directors and Executive Directors, the Forrestfield Airport Link and the Perth Stadium and Sports Precinct were discussed. Trish McDonald, Project Director of the New Museum Project, provided insight into the $428 million New Museum Project, which aims to transform the Perth Cultural Centre with a new museum and additional refurbishments to surrounding buildings. Ministers and Federal Members were also present at the event, including Minister for Regional Development and Lands, Hon. Terry Redman MLA, who provided a Ministerial Address on day one of the conference. Topics at the event included presentations on the recent Agricultural White Paper, Rebalancing Growth at the End of the Mining Boom and an update on the Department of Transport’s Plans and Priorities for the state. The conference also featured an extensive Panel Discussion on the topic of Diversifying WA’s Economic future, with speakers including Lino lacomella, Executive Director, Property Council WA and Tony York, President of the WA Farmers Federation. Dr. Tim Griffin, Deputy Director General Approvals and Compliance, Department of Mines and Petroleum - WA, spoke on WA’s Resources Sector and the gradual increase of efficiency seen in the mining sector. “The average number of people employed in 2015 is down for the first time since 2009, by using fewer employees as a result of adopting new technologies,” Griffin said. In the 2015 state budget the Western Australian government announced a $24.1 billion infrastructure program over the next four years, including $1.2 billion towards the funding of new rail cars. The conference continues to be the largest major projects and infrastructure conference within the state, facilitating the growth of the state’s pipeline of projects and infrastructure works. The 7th Annual WA Major Projects Conference was held at the Perth Convention and Exhibition Centre on the 6th & 7th of April.For more information, visit http://www.waconference.com.auAbout Expotrade Expotrade is a global conference and event organizer with its head office based in Melbourne, Australia. Expotrade has delivered some of the largest, most successful B2B industry conferences and events in the areas of infrastructure, major projects, sustainability, technology & architecture. For almost 10 years, our unique blend of knowledge, experience and flexibility has accomplished an array of consistently top quality events. Today, Expotrade events enjoy such a distinctive edge, they are amongst the best patronised in the calendar.Expotrade Australia Pty LtdSuite 1, Level 1, 2 Brandon Park Drive Wheelers Hill VIC 3150 Australia Tel: +613-95450360 Fax: +613-95450320 Email: info@expotrade.net.au