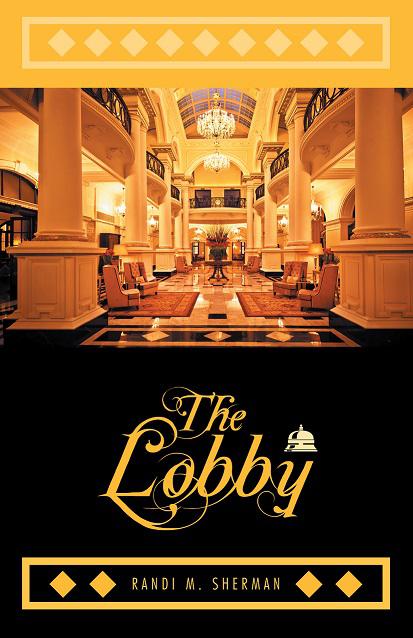 Check-in to THE LOBBY

THE LOBBY (Friesen: 2016) a new novel by Randi M Sherman. If you’ve ever spent time in a hotel lobby people-watching, you will recognize the various cast of colorful characters in Randi Sherman’s new book: THE LOBBY: The guest on a business trip who complains about every add-on charge; the controlling husband who badgers the front desk staff while his embarrassed wife looks on helplessly; the company employees attending an off-site conference playing musical bedrooms; the adulterous couple sauntering freely in a hotel lobby thinking their secret is safe from their respective spouses; the out-of-towner wanting to get his money’s worth on his weekend stay who disputes every charge on his bill; the aging playboy who flirts with the polite hotel receptionist thinking he’s still got it when she smiles back at him as she is trained to do.THE LOBBY is set at a grand San Francisco hotel, The Shipley, which is a composite of every hotel Ms. Sherman has ever stayed at. The Shipley’s fictitious lobby, which could be a stand-in for any upscale hotel lobby in the world, offers a microcosm of humanity where one can witness the comings and goings all types of people with independent reasons for being at the same place at the same time. In THE LOBBY, Ms. Sherman presents 50 intersecting stories that take place during a single 24-hour period, in just one location. Her book is a hilarious description of what goes on in hotels, how the staff copes with difficult guests, and what types of people stay at upscale hotels. Sherman’s experience as a stand-up comedienne is evident throughout the hilarious, often laugh-out-loud scenes in THE LOBBY, where her insights into humanity’s flaws, preoccupations, and private behavior when you think no one is looking, are so accurate. Many movies, including Grand Hotel, Neil Simon’s California Suite and The Plaza Suite, and The Best Exotic Marigold Hotel have been made because hotels are great canvases with which to watch various people interact with one another. THE LOBBY, like those famous movies, delivers a vast canvas of eclectic characters that displays people behaving in all their outrageous and unwitting guises for all the world to see when they think no one is noticing. THE LOBBY is available at all of your favorite online booksellers: Amazon.com, BarnesandNoble.com, iTunes, GoogleBooks.com, Nook, Kindle, Kobo and more... THE LOBBY is distributed by IngramFor more information go to: www.randimshermanbooks.comAuthor of character-driven humorous fiction, publisherRM Sherman 17043 Brookside Rd Sonoma, CA 95476

09-20-2016 | Leisure, Entertainment, Miscel …
Randi M Sherman Books
11 Awards and Counting for humor novel THE LOBBY
We are thrilled to announce that readers and critics are loving Randi M Sherman's latest humor novel THE LOBBY. An unexpected and hilarious opportunity to eavesdrop on the comings and goings and most comedic interesction of those lives passing though an upscale San Francisco hotel lobby. Ecclectic guests, hotel staff and long-term residents stories intermingle throughout. 50 interwined stories taking place during a single 24 hour period and in one location: THE
08-09-2016 | Leisure, Entertainment, Miscel …
Randi M Sherman Books
Your Guilty Pleasure This Summer...THE LOBBY
With 9 Awards and counting, THE LOBBY is a must read this summer. Another hilarious novel by author Randi M Sherman will take you to the lobby of an upscale San Francisco Hotel where you can witness the comings and goings and the most comedic intersections of perky staff, long-term residents and eclectic guest. 50 interlined stories taking place during a single 24 hour period in one location - THE LOBBY. Sit
07-27-2016 | Leisure, Entertainment, Miscel …
Randi M Sherman Books
Hollywood loves THE LOBBY
Nine awards and Counting. THE LOBBY is recognized by the Hollywood Book Festival. 2016 National Indie Excellence Award Winner 2016 Beach Book Festival Winner 2016 Amsterdam Book Festival Winner 2016 Hollywood Book Festival Runner-up 2016 Holiday Book Festival Runner-up 2016 Los Angeles & Paris Book Festivals Runner-up 2016 San Francisco & New York Book Festivals HM And more to come Reminiscent of Grand Hotel and Neil Simon's California Suite, THE LOBBY (Friesen Press; March 2016) by Randi Sherman sheds
07-13-2016 | Leisure, Entertainment, Miscel …
Randi M Sherman Books
THE LOBBY touted a "must read"
Winner of the National Indie Excellence Award for General Fiction, the 2016 Beach Book Festival, 2016 Amsterdam Book Festival, Runner up in the 2016 Paris and Los Angeles Book Festival and more – The Lobby has been touted as a “must read” this summer. “A highly entertaining and original novel you will absolutely love, don't hesitate to add The Lobby to your list of 'must reads' for the weeks
06-20-2016 | Politics, Law & Society
Randi M Sherman Books
THE LOBBY donates to the Pulse Victims Fund
Pledging 50% of the royalties from the sale of THE LOBBY to Pulse Victims Fund I am an author and a member of the LGBT community. I am deeply saddened by the events that took place June 12 at the Pulse Nightclub in Orland Florida. Remember not only were members of the gay and lesbian community effected by this senselessness, the Latin community, Orlando and our feeling of ease were all
05-11-2016 | Health & Medicine
www.mmhcoalition.com
NCMMH Hosts Lobby Day & Briefing on Capitol Hill May 17th
For Immediate Release — The National Coalition for Maternal Mental Health (NCMMH) is spearheading a Lobby Day and briefing on Capitol Hill, Tuesday, May 17, to support the Bringing Postpartum Depression Out of the Shadows Act of 2015, which will provide for better education about and treatment of maternal mental health issues, as well as increased access to appropriate care. House of Representatives Bill #HR3235, introduced by Congresswoman Katherine Clark (D-MA),
Comments about openPR
Your portal is fast, simple, and easy to use. Others may have more functions but they also demand more editing time, you have to preformat the text in order to achieve a good result etc. I think openPR is really fantastic!
Andreas Knepper, wallmedien AG