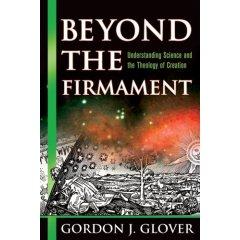 Gordon J. Glover, author of Beyond the Firmament: Understanding Science and the Theology of Creation, has released a three-part online video series entitled Does Science Contradict the Bible? These three online videos mark the beginning of a series of resources designed to encourage Christians to study the relationship between science and the Bible. The videos are freely available through the Beyond the Firmament website at www.beyondthefirmament.com.The first video is entitled What is Science? What is the Bible? and addresses these basic questions which undergird the entire faith and science debate. Glover considers the nature of each of these realms from a historical perspective, never losing sight that in the midst of scientific discovery, the heavens have always declared the glory of God. The second video asks What kind of “Science” does the Bible teach? Many people say that the Bible is not a science textbook, which is true, but upon which scientific model of the universe does this drama of redemption unfold? Glover contends that if we are willing to set aside our modern 21st century understanding of the heavens and the earth and see the Bible as the original audience would have understood it, the answer to this question becomes clear. The final video asks How should Christians treat the natural sciences today? What should Christians do with the apparent contradictions between science and Scripture? How does a Biblical worldview affect our interaction with contemporary science? Such questions are addressed by Glover in this final video in the trilogy.These videos have been released online in conjunction with the new book Beyond the Firmament: Understanding Science and the Theology of Creation, the debut release from Gordon J. Glover and Watertree Press. Dr. Christopher M. Sharp, research astrophysicist and educator, praises the book and notes “it should pique some Christians, agnostics, and atheists into thinking about what they believe, or what they do not believe.”Beyond the Firmament is being distributed through Ingram Book Group or may be ordered online at Amazon.com or BN.com. More information about the book can be found at www.beyondthefirmament.com which is also where the video series is available.About Beyond the Firmament:Author: Gordon J. Glover ISBN-10: 0978718615 ISBN-13: 9780978718619 Format: Soft Cover, 9x6”, 228 pages Retail Price: $16.00 Publisher: Watertree Press | www.watertreepress.comJason Baker Watertree Press LLC PO Box 16763 Chesapeake, VA 23328 info@watertreepress.com www.watertreepress.comAbout Watertree Press: Watertree Press LLC is a new publishing house dedicated to quality non-fiction works which fulfill our motto: Read. Think. Grow.

01-25-2021 | Health & Medicine
Watertree Press LLC
Children’s Dysgraphia Book Free for National Handwriting Day
Writing Right: A Story About Dysgraphia, an illustrated children’s book from Watertree Press, is being given away in digital form for free on Saturday, January 23, 2021 in honor of National Handwriting Day. Writing Right provides an empathetic look at Noah, a third-grade boy with dysgraphia, a disability that affects writing skills and can make learning difficult. The digital book can be acquired for free throughout the day from the
02-19-2020 | Health & Medicine
Watertree Press LLC
Children's Dysgraphia Book Reaches Amazon Best Seller Lists
Writing Right: A Story About Dysgraphia, the first illustrated children's book released from Watertree Press, entered the top 50 of Amazon's Children's eBooks on Disabilities & Special Needs category this week. Simultaneously, the paperback edition entered the top 100 of Amazon's Children's Special Needs Books category. Writing Right: A Story About Dysgraphia by Cassandra Baker is an illustrated children's book whose main character is Noah, a third-grade boy with dysgraphia. Writing
09-12-2012 | Science & Education
Watertree Press LLC
Digital Statistics Textbook Tops Amazon Hot New Releases
Social Science Research Design and Statistics, the first digital textbook released from Watertree Press, topped Amazon’s Hot New Releases in Computer Software eBook category this week. Simultaneously, the paperback edition reached number two in Amazon’s Hot New Releases in Social Sciences Research. Social Science Research Design and Statistics: A Practitioner's Guide to Research Methods and SPSS Analysis by Alfred P. Rovai, Jason D. Baker, and Michael K. Ponton is a
03-03-2009 | Leisure, Entertainment, Miscel …
Watertree Press LLC
Fighting for Peace Helps Christians Confront Conflict with Character
Conflict in relationships is a fact of life. When people are around each other there is not only the potential for conflict, but there is going to be conflict in some form, to some extent, at some time. Rather than fearing conflict, Dr. Dennis D. Morgan encourages readers to see conflict as an invitation from God to strengthen relational closeness in Fighting for Peace, the new book being released in