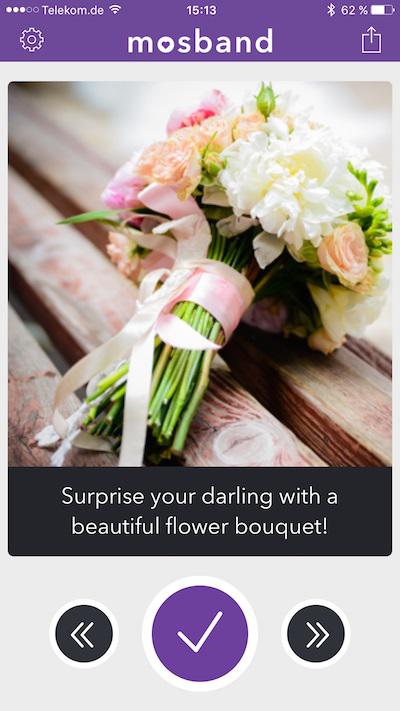 The iOS app mosband is designed for men who want to appear at their best in a relationship, but sometimes lack ideas of how to do it. Mosband does not only remind men to surprise their girlfriend from time to time, but also delivers suitable tips at once.Berlin, 12.10.2015 - The mosband app recalls men to give a little pleasure or surprise to their partner in their daily routine. The user gets reminded through notifications on his iPhone and can evaluate the different ideas within the app immediately. It can be chosen between daily, on weekdays or weekly reminders. Through the easy handling of the app, all ideas can be reviewed and the implemented ones can be marked as done. By marking those, mosband points can be received and the user is making great process towards becoming a “model husband”. Moreover, the user can record his relationship date in the app to see how long exactly he has been happily in a relationship. He can even receive a reminder for his anniversary.Daniel Schmidt, CEO of simpleTechs and inventor of the app explains: “Men try hard to give their best in a relationship but often lack ideas of how to make their girlfriend happy. Mosband helps them to present themselves at their best. Our friends tried the app in advance and they were absolutely thrilled. They said, the reminders and tips were easy to integrate in their everyday life´s and their girlfriends were pleased about the little surprises.” The handy app is available in German and English and can be downloaded for free in the Apple App Store. The following update will make Spanish, French, Dutch and Chinese available.We are in particular specialized on the development of apps and softwares. We offer our service for the following platforms: iOS, Android, Windows Phone, Windows 8 and SmartTV.Press contact: simpleTechs GmbH Sonja Hänszke Oranienburger Straße 27 10117 Berlin, Germany Phone: +49 171 5276504 Mail: sonja@simpletechs.net More information: www.mos.band