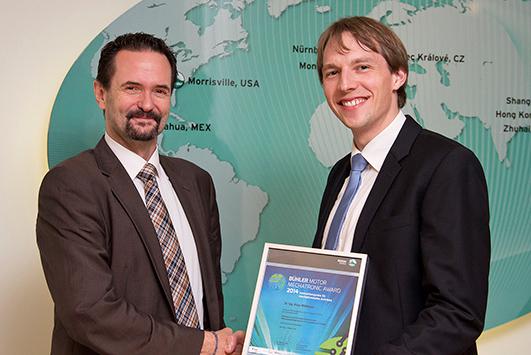 Dr.-Ing. Klaus Mühlbauer honored for outstanding PHD-thesisNuremberg, 17. November 2014 – "Regulation of two-generator on-board electrical systems and enhancement of the energy efficiency of power electronics at partial load": This was the title of the PHD-thesis with which Dr.-Ing. Klaus Mühlbauer impressed the jury of the Bühler Motor Mechatronic Award."Dr. Mühlbauer examines two approaches to increasing the energy efficiency of existing systems. On the one hand, at system level, the total energy requirement is reduced through the electrification of mechanical, pneumatic and hydraulic systems. On the other hand, efficiency is increased by improving individual components", explains Dr.-Ing. Ralph Böhm, Vice President Research & Development at Bühler Motor GmbH.The work is divided into two parts. In the first part, Dr. Mühlbauer looks at d.c. on-board electrical systems of future aircraft, known as more electric aircraft (MEA). In these more electric aircraft, existing mechanical, hydraulic and pneumatic systems are replaced by demand-optimized electrical drives in order to increase system efficiency. The on-board electrical systems necessary for this will be fed by two generators in the future, instead of just one generator, as is usual today, which will produce an efficiency advantage in electrical power generation. There will be a starter generator with active rectifier and a generator with passive rectifier and brushless excitation. Every engine will have two generators, which creates the freedom to divide the load of the on-board electrical system across both generators.This "two-generator topology", as it is called, can be realized both in a parallel and series connection of the two generators. However, different control structures are needed for this. This is precisely the subject covered by Dr. Mühlbauer's thesis.The controllers are designed using the controlled systems of the starter generator and the second generator. For this, Dr. Mühlbauer established analytical transfer functions of the controlled systems. In order also to make the non-linear behavior of the passive rectifier of the second generator available to an analytical description, he distinguishes between several operating modes.He then succeeded, using simulations, in checking, verifying and finally assessing the various control concepts with their different designs in terms of voltage stability and power regulation. The second part of his work examines the possibilities for increasing the energy efficiency of electrical drives especially at partial load. Distributed and concentrated windings are compared, for example. Dr. Mühlbauer proves the efficiency advantage of the concentrated winding and shows that the lower phase current associated with it also reduces the losses of the power electronics. An additional modification of the semi-conductor chip area in the power electronics further reduces losses. By additionally varying the current-carrying IGBT chip surface during operation, efficiency can be increased still further, particularly at partial load.Using a simulation platform for a traction drive of an electric vehicle, Dr. Mühlbauer was able to successfully verify the above correlations.In the realistic Artemis driving cycle, the concluding comparison of a standard drive with the loss-optimized drive showed a reduction in losses of 34% and an energy saving of 7%."I was particularly impressed by the practical orientation of his work. Klaus Mühlbauer's work contains stimuli that are absolutely vital for us", commented Dr. Böhm.The jury was made up of Prof. Dr.-Ing. Dieter Gerling from the Department of Electrical Propulsion Technology and Actuator Systems at the University of the Federal Armed Forces in Munich, Prof. Dr.-Ing. Jörg Franke from the Department of Manufacturing Automation and Production Systems at the Friedrich Alexander University of Erlangen-Nuremberg, PD Dr.-Ing. habil. Andreas Möckel from the Small Machinery Division of Ilmenau Technical University, Dr.-Ing. Ralph Böhm, Vice President Research & Development at Bühler Motor GmbH and Peter Muhr, President & CEO of Bühler Motor GmbH.Entries for the Bühler Motor Mechatronic Award were once again invited by Prof. Dr.-Ing. Dieter Gerling, Prof. Dr.-Ing. Jörg Franke and PD Dr.-Ing. habil. Andreas Möckel in collaboration with Bühler Motor GmbH. The aim of the Award is to honor and promote outstanding achievements in first degree and Masters' dissertations and doctoral theses. The Award was presented on 30 September 2014 as part of the E|DPC (4rd International Electric Drives Production Conference and Exhibition in Nuremberg). The prize is worth €5,000.About Bühler MotorBühler Motor delivers demanding, custom-made, and reliable drive solutions with DC/BLDC small motors and gear motors.Over 1,600 employees ensure successful development, industrialization and production of mechatronic drive solutions for mid- to high volume applications.More than one of out every ten employees at Bühler Motor works in Research and Development. Our in-house sample shop and R&D department, combined with state-of-the-art test labs, enable Bühler to concentrate completely on quick and flexible development of customer specific drive solutions.With eight locations on three continents and highly developed process competencies, Bühler Motor is able to fulfill all customer requirements for short transit times, quality, and on-time delivery at the required volumes.The company’s strategic markets include the automotive market, the healthcare equipment market, general industrial solutions in the field of building automation, agriculture, transportation and logistics as aircraft seat actuators, pumps, paper handling, vending and banking machines.www.buehlermotor.deBühler Motor GmbH Roswitha Schuller Corporate Communication Anne-Frank-Straße 33-35 D-90459 Nürnberg Phone: +49 911 45 04-1129 Fax: +49 911 43 08 69-1129 e-mail: Roswitha.Schuller@buehlermotor.de