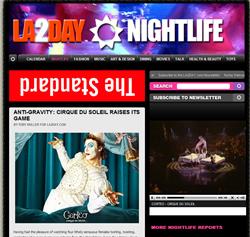 LOS ANGELES, CA - In keeping with its mission of covering the most acclaimed cultural events in Los Angeles as well as uncovering the city’s hidden treasures, online LA magazine LA2DAY.com (la2day.com) this week presented its review of Cirque du Soleil’s newest presentation, Corteo. This year marks the 20th anniversary of Cirque’s triumphant LA premiere. In the intervening two decades, the troupe’s offbeat circus-theatre hybrid has grown to become an entertainment phenomenon, giving rise to more than a dozen individual shows. The version currently performing in Los Angeles (under the Grand Chapiteau at the Forum) is entitled Corteo. The performance unfolds before the audience as a clown remembers his life in the circus. “The clown’s visions play out in a dazzling variety of directions - gymnasts spin inside giant rings and swoop over high bars, acrobats fly through the air and do flips off a seesaw, a clown tightropes upside down, the stage revolves, a performer climbs a ladder to nowhere, angels descend and a midget floats just above our heads,” writes LA2DAY reviewer Toby Miller. The review can be read in full at: http://www.la2day.com/nightlife/anti_gravity_cirque_du_soleil_raises_its_game. Press Contact Marlon Ray http://www.la2day.com marlon@la2day.com 310-247-9610 360 S. Rexford Dr. Suite 12 Beverly Hills, CA 90212 About LA2DAY: LA2DAY.com (http://www.la2day.com) is an LA online magazine devoted to mining the undiscovered gems of Los Angeles. Whether it’s music, theatre, movies, dining, nightlife or boutiques, LA2DAY.com’s staff writers bring their passions to reporting the city’s things to see and places to be. For all who call alternative LA home and for kindred spirits on a weekend pass, LA2DAY.COM illuminates fresh currents and extraordinary experiences.