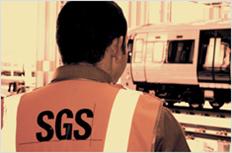 SGS has been awarded a contract to support the USD 2.9 Billion Mexico City-Toluca rail project. Based on its comprehensive expertise, SGS will project manage the building of a 57.7km rail network and to ensure it is completed to the required quality standards, on schedule and within budget. The major railway infrastructure project in Mexico – the USD 2.9 billion Mexico City – Toluca rail project will bring a new 57.7km rail network to the region, including four new stations, two terminals, two 4.6km tunnels and two viaducts of over 40km in length. In order to ensure smooth running of the project, The Secretariat of Communications and Transport, through the Directorate of Railway and Multimodal Transportation, has chosen SGS. The project is expected to take an estimated 1,385 days to complete, running from August 20, 2014 until June 4, 2018. SGS will provide a team of around 115 experts across the route.SGS will be in charge of the administration, monitoring and control of the entire project, comprising civil works, electro-mechanical works, workshops and depots and the acquisition of new rolling stock. SGS has successfully delivered services for a wide range of infrastructure projects (http://www.sgs.com/en/Construction/Project-Management/Services-During-Construction.aspx) across the globe. Its knowledge of the market and capacity to build up the best teams gave the Mexican government confidence that the project will be completed to the required quality, on schedule and within budget. The company was also selected due to its proven track record working with the current Minister’s team, formerly at the State of Mexico, in various infrastructure projects for more than eight years. SGS has participated in numerous infrastructure projects in Mexico, including the construction supervision (http://www.sgs.com/en/Construction/Project-Management/Services-During-Construction/Construction-Supervision.aspx) highways, hospitals and prisons; the architectural design of the presidential hangar complex and now as project manager for the construction of this railway for public transportation. SGS was also selected as it submitted the most competitive offer in terms of technical capabilities, experience and economic conditions.SGS is the world’s leading inspection, verification, testing and certification company. SGS is recognized as the global benchmark for quality and integrity. With more than 80,000 employees, SGS operates a network of over 1,650 offices and laboratories around the world.SGS Industrial Services SGS de Mexico S.A. de C.V. Carolina Caceres Operational Integrity Director Paseo de la Reforma 560, Col. Lomas de Chapultepec Mexico City t: +52 55 5387 2115 m: +52 1 3858 8521 E-mail: industrial.pr@sgs.com www.sgs.com/en/Health-Safety