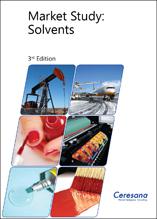 No matter if paints or adhesives, pharmaceutical drugs or cosmetics: solvents are immensely important in the manufacturing of many industrial goods. Ceresana publishes the most comprehensive report on the global market for solvents. According to this study, already published in its third edition, solvents valuing about US$25 billion were sold in 2013. Market analysts expect revenues to rise by another 4% p.a. Until 2021.Disputed But CommonThe largest consumers of solvents are manufacturers of paints and varnishes, followed at a considerable distance by producers of printing inks. Demand on the part of the pharma industry ranked third, followed by utilization in cosmetics and adhesives. Other important applications are chemical manufacturing processes, cooling circuits, dry-cleaning and deicers. In the segment paints and varnishes, however, a trend towards water-borne products and other more environmentally friendly alternatives becomes apparent. Especially in Europe and North America the market share of solvent-borne paints and varnishes is falling, as these are regarded as hazardous to environment and health.  Demand Varies Depending on RegionAsia-Pacific already accounts for about 45% of total global demand for solvents in the sector paints and varnishes. Asian countries also are the largest sales markets for solvents used for printing inks and adhesives. In the production of cosmetics, on the other hand, North America and Western Europe process the largest amount of solvents; in the sector pharmaceuticals North America is the prime sales market. Recovery in North America In 2013, Asia-Pacific was the worldwide largest sales market for solvents, accounting for 41% of total demand, followed by North America and Western Europe. The largest growth markets are China, India and Brazil, but an upturn can also be seen on the North American market after sales volume in this region fell somewhat in recent years. Ceresana expects stagnation for Western Europe, since industrial sectors processing solvents will grow only marginally.Alcohols Most Popular SolventsIn 2013, the most commonly used solvents were alcohols, mainly ethanol, n-butanol, isopropanol and methanol. About 6.5 million tonnes of these products were consumed worldwide. Aromatics, ketones, esters and ethers also account for notable market shares. Ethanol, toluene and acetone are among the most popular solvents. With an expected increase of 3.4% per year, the group of ethers will be the fastest growing market. The Study in Brief:Chapter 1 concisely summarizes the most important facts about solvents and gives information regarding their production and use. Chapter 2 is a presentation and analysis of the global solvent market, including forecasts up to 2021: Demand and revenues are given for each world region. Chapter 3 provides detailed data on solvent demand and revenues in 14 countries. In addition, this chapter provides in-depth information on the demand for solvents in the sectors paints and varnishes, printing inks, adhesives, cosmetics, and pharmaceuticals as well as in other application areas. Chapter 4 provides a substantiated analysis of individual applications of solvents: Data on demand development, split by the seven world regions Western Europe, Eastern Europe, North America, South America, Asia-Pacific, the Middle East, and Africa are given. Chapter 5 provides detailed analyses of demand for individual groups of solvents such as alcohols, ketones, esters, ethers, aromatics, pure hydrocarbons, and other solvents. The following solvent types have been analyzed separately: ethanol, n-butanol, isopropanol and methanol, acetone and methyl ethyl ketone as well as toluene. Chapter 6 provides profiles of the largest solvent manufacturers, clearly arranged according to contact details, turnover, profit, product range, production sites, profile summary, and product base. Extensive profiles of 105 manufacturers are given, including BP PLC, Chevron Corp., China National Petroleum Corporation, Eni S.p.A., Exxon Mobil Corporation, Royal Dutch Shell, PLC Saudi Arabian Oil Co., SINOPEC Corp., The Dow Chemical Company and Total SA.Further Information:www.ceresana.com/en/market-studies/chemicals/solvents/Ceresana is a leading international market research and consultancy company for the industrial sector and operates branch offices in Constance, Vienna and Hong Kong. For more than 10 years, it has been supplying several thousand customers from 55 countries with up-to-date market intelligence. Extensive market knowledge creates new prospects for strategic and operational decisions. Ceresana's clients profit from practical consulting services, tailor-made single-client studies and more than 60 independent multi-client market studies. The Ceresana business analysts are specialists in markets chemicals, plastics, additives, commodities, industrial components, packaging, and construction materials. More about Ceresana at www.ceresana.comCeresana Technologiezentrum Blarerstr. 56 78462 Konstanz Germany Tel.: +49 7531 94293 10 Fax: +49 7531 94293 27 Public Relations: Martin Ebner, m.ebner@ceresana.com

07-30-2020 | Industry, Real Estate & Constr …
CERESANA
Mixed prospects: new Ceresana study on the European market for windows and doors
The corona pandemic and the respective global containment measures are causing massive economic disruption, which is also damaging the supposedly solid construction industry. With this study, Ceresana has already examined the European market for windows and doors used in buildings for the third time. The current report provides an assessment of how the corona crisis is affecting this industry sector as well as forecasts about the magnitude and timeframe of
06-29-2020 | Industry, Real Estate & Constr …
CERESANA
Solid study: up-to-date Ceresana report on world market for adhesives
Whether for smartphones or sports shoes, insulating glass windows, cars, airplanes or even repairs in the recycling industry: adhesive bonding technology is an innovative key technology in a wide variety of industries today - and its potential is still not fully utilized. With this study, Ceresana has already analyzed the entire market for adhesives for the fourth time: more than 14.7 million tonnes were consumed around the globe in 2019.
05-27-2020 | Industry, Real Estate & Constr …
CERESANA
Flexible and robust: new Ceresana study about the global market for polyethylene …
Linear low-density polyethylene (LLDPE) is one of the most widely used types of standard plastics. Other varieties of polyethylene, especially LDPE and HDPE, are sometimes easier to process; however, LLDPE is more flexible and has a higher resistance against tearing, shocks, and punctures. These special properties are the result of the manufacturing process: copolymerization with alkenes at low temperatures and low pressure results in polymer chains with short branches only.
02-14-2020 | Industry, Real Estate & Constr …
CERESANA
Green boom: Ceresana forecasts further growth for bioplastics
Polylactic acids, starch blends, cellulose, and other bioplastics achieve significantly higher growth rates than conventional standard plastics made of mineral oils or natural gases. ,,Bioplastics can be used in a growing number of application areas," explains Oliver Kutsch, CEO of market research institute Ceresana. With its newest study, Ceresana has examined the world market for "green" polymers for the fifth time already. Analysts predict their future development to remain dynamic: