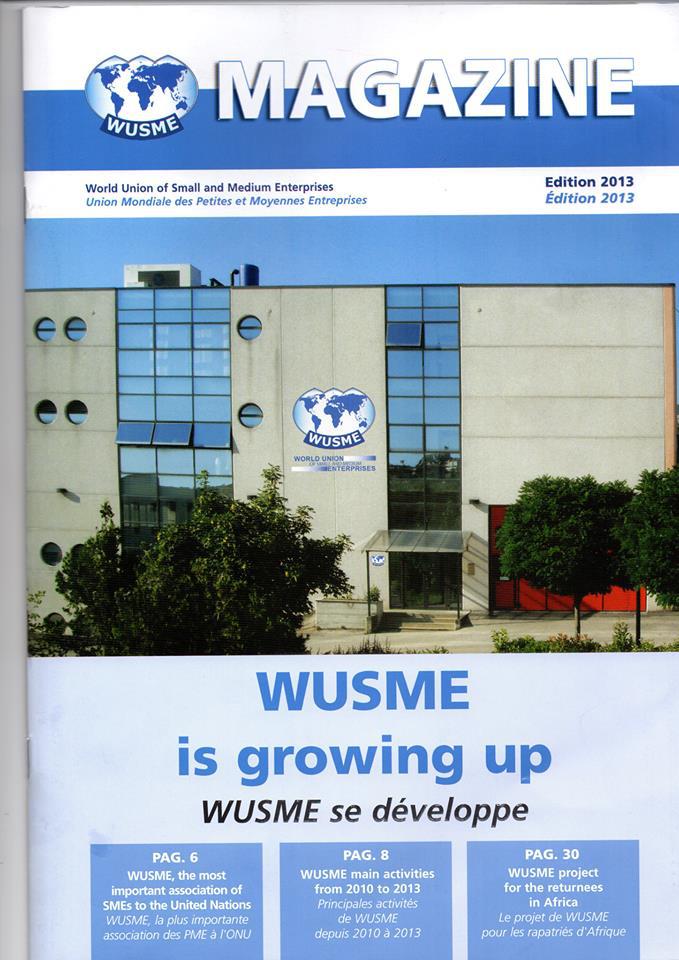 WUSME RECOMMENDED A NEW STRATEGY FOR WASTE TO ENERGY IN ADRIATIC COUNTRIES Participants in the Waste to Energy Workshop in San Marino on 6th September 2014 were delegates from China, India, Africa and European Countries. The Conference has been opened by H.E. Mrs. Antonella Mularoni, State Secretary in charge of territory, environment, International relations and waste management for the Republic of San Marino. She offered the active cooperation of the RSM Government in all further endeavors of WUSME to help solving environmental and waste problems in San Marino and in the Adriatic Italian region. Results: WUSME President Gian Franco Terenzi convened in cooperation with WUSME Vice Presidents from France and India this Workshop bearing in mind that WASTE is part of the global economy, as more than 4 billion metric tons of waste are been worldwide produced every year, containing either garbage or “gold”. It is possible with modern technologies to convert such garbage in valuable commodities with a market price like crude oil, gas and electricity. More than 90 % of all SMEs and Crafts are actively involved in waste management and new waste technologies, such as recycling of valuable raw materials and the use of organic waste from household and industry which can nowadays be converted to commodities such as oil, gas, organic fertilizers and building materials. The workshop heard statements from WUSME Vice President J.S. Juneja, from Chinese delegates, from experts from Canada, Germany, Hungary and Austria. The Secretary General of WUSME Norbert Knoll von Dornhoff mentioned that the World Bank recently issued a report regarding the environmental situation of the Adriatic Countries. Therein Rimini and other cities at the Adria are being marked as so called HOT SPOTS which means that these regions already heavily suffering from pollution of various sources, particularly from plastic waste and chemical fertilizers from agriculture. With a view at recent programs initiated by the European Union such as the 2014 Adriatic Environmental Strategy and initiatives of the United Nations it is now the best time to start in the region of San Marino and Italy a project as a model for advanced technology waste to energy. It is assumed that in this region 500.000 inhabitants, including tourists, each person producing 600 kg waste a year would generate 300.000 metric tons of organic waste every year. A Canadian German- Switzerland based company offered to deliver a low temperature catalytic conversion plant in this region capable of processing a minimum of 150.000 tons of communal and industrial waste to high quality petrol, electricity and other valuable commodities. This Company would finance this plant with a value of 200 million euros as an own investment, provided that they could get a license for such a plant and the guarantee that the waste would be delivered to the plant. Also Hungarian companies have developed similar plants for smaller amounts of waste which would be suitable for implementation in San Marino. All these technologies cause no pollution neither to water nor air. The Chinese delegate Mr. Dai Jian, director of one of the biggest industry parks in China for SMEs, proposed that WUSME shall with their assistance open an own office in this industry park and convene early next year a workshop for presenting innovative technologies in China. WUSME President Terenzi expressed his active support in forming a Permanent Commission Waste to Energy with the task to work out a detailed program to the consideration of Governments of Adriatic Countries and the Republic of San Marino.Contact: Norbert Knoll von Dornhoff, General Secretary, mailto: wus@europe.com H-1026 Budapest, Garas utca 22. Tel: +3630-725 12 68WUSME World Union of Small and Medium Enterprises is an International NGO in Consultative Status at UN ECOSOC. Our mission is to safeguard the rights, interests and competitiveness of entrepreneurs and crafts.WUSME World Union of Small and Medium Enterprises, General Secretariat: Garas utca 22, 1026 Budapest, Hungary. Contact: Norbert W. Knoll von Dornhoff, Tel.: 361-315 10 59 mail: wus@europe.com

You can edit or delete your press release BILLION TONS OF WASTE: TRASH OR GOLD? here

09-04-2009 | Associations & Organizations
WUSME World Union of SMEs
INTERNATIONAL SME CONFERENCE IN SAN MARINO 9-10.11.2009
Time for a true WORLD UNION of SMEs supporting Organisations. SMEs Supporting Organisations world wide are invited to send their delegates. The International Conference on the foundation of WUSME WORLD UNION OF SMES will be held on 9thth – 10th November 2009 in the Republic of San Mario, hosted by CESA Foundation and under the aegis of the Government of the Republic of San Marino. The Chairman of the Conference, Gian

01-11-2019 | Politics, Law & Society
Cartwright Law Firm
SAN FRANCISCO CAR ACCIDENT LAWYERS
From simple car accidents to boating accidents and plane crashes, The Cartwright Law Firm provides comprehensive legal services to people injured in all types of Car Accidents. We represent injury victims as well as families who have lost loved ones to wrongful death in an accident. Our firm has a full-time, in-house investigator who can determine who was at fault for your accident. In many cases, he can visit the scene
12-17-2018 | Fashion, Lifestyle, Trends
Society of Single Professionals
Beyond Chemistry Keynotes San Francisco Singles Convention
FOR IMMEDIATE RELEASE Contact: Rich Gosse, 415-507-9962 BEYOND CHEMISTRY: HOW TO CREATE A LASTING RELATIONSHIP KEYNOTES SAN FRANCISCO SINGLES CONVENTION Dr. Ann Schiebert, PsyD, keynotes the annual San Francisco Singles Convention, Saturday, January 19, 2019, 7:30pm, at the Westin St. Francis Hotel on Union Square, California Ballroom 335 Powell Street, San Francisco. Her topic is “Beyond Chemistry: How to Create a Lasting Relationship.”
05-21-2012 | Health & Medicine
Otto Bock HealthCare GmbH
Helping San Myo
A twelve year-old from Myanmar receives a leg prosthesis from Ottobock – Foundation covers costs San Myo from Myanmar is a bright and happy boy. Though the twelve year-old was born without the lower half of his left leg, the handicap doesn't keep him from playing football with friends. In order to help him walk, his father cobbled together a prosthesis using an old drain pipe. At the Ottobock facilities in
01-11-2012 | Politics, Law & Society
San Diego DUI Defense Attorney
San Diego DUI Defense Attorney
January 9, 2012: Mark R. De Yoe, APLC, San Diego DUI defense attorney, has over 25 years of experience as a DUI defense attorney and understands how stressful, scary and confusing being involved with a DUI can be. As Mark's website states, "he's not an experienced DUI attorney, he is and extremely experienced DUI attorney." Mark R. De Yoe has seen it all, as far as DUI cases go: first second,
03-07-2011 | Business, Economy, Finances, B …
W.W. Equipment
San Antonio Truck Company Offers Shuttle Services
San Antonio, TX March 2011. W.W. Equipment offers many work vehicles and accessories, including bucket trucks, digger trucks, reel trailers, pullers and tensioners, and utility poles. They have a unique and thriving inventory, with new options featured regularly. What sets this company apart from its competitors, however, is its dedicated commitment to making their equipment widely available in places like Buffalo and Cincinnati. Not
11-03-2009 | Arts & Culture
The Relevant Stage
Comedy Invades San Pedro
San Pedro BrewHaHa is a new Comedy and Beer Festival produced by Ray Buffer and Mark Tomaino, happening in November from the 6th to the 22nd at Warner Grand Theatre in the historic waterfront and arts district of downtown San Pedro – the Port Town of Los Angeles. San Pedro BrewHaHa is a one-of-a-kind event that brings together great comedic acts, an expanded selection of beers and libations, plus
Comments about openPR
OpenPR is clearly structured and remains true to its principle of confining itself to the essential parts. OpenPR has proven to be a very good and reliable partner to our media agency: Within the shortest time the releases are online and go down well with the media representatives. The success of OpenPR is reflected in the steadily increasing number of press releases. It is good that OpenPR exists!
Ursula Koslik, Director Marketing & PR, F+W Hamburg