Control LEDs with smartphones and tablets 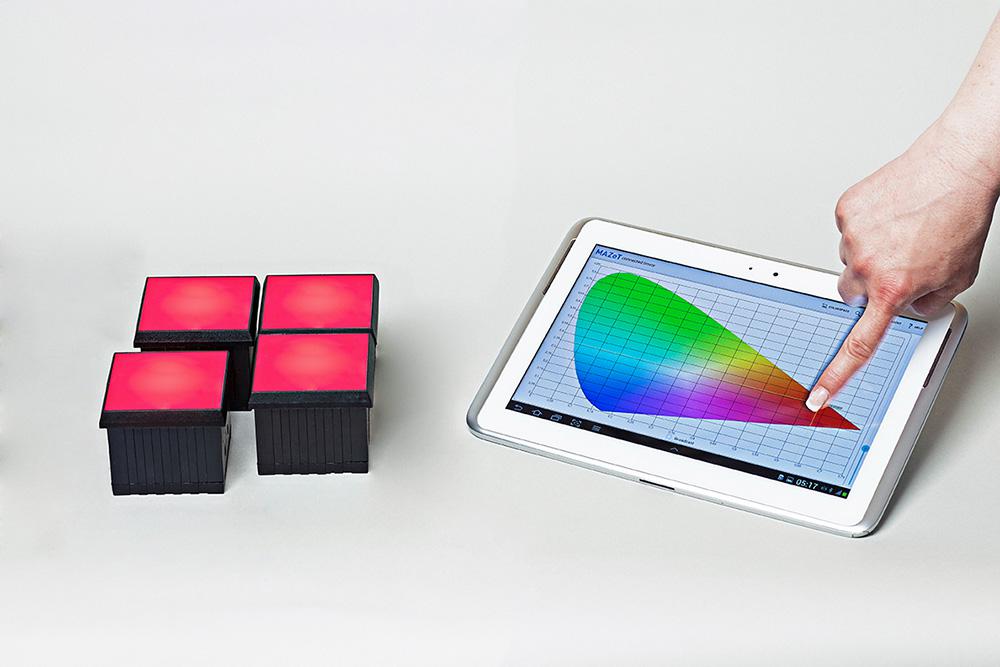 MAZeT provides smooth playback of color, color temperature and brightness of even spectrally varied LEDs MAZeT GmbH, developer and manufacturing services provider for embedded systems and optoelectronics, introduces the wireless control of LEDs from a smartphone or tablet. "A LED-based RGBx light box demonstrates vividly how the smartphone or tablet accurately controls the color, color temperature and brightness," explained Frank Krumbein, Product Manager for Color- and Spectral Sensor Technology at MAZeT. Depending on the wireless connection, several light boxes can thus be managed simultaneously. This means they can all display a specific color mix from the RGBW palette or also conjure up a scenario of different colors." No color differences in the same color on all light boxes are discernible to the human eye. There are also no differences when the operating conditions change or LEDs of different types or bins are used. A True Color sensor from the JENCOLOR® series ensures a constant color scheme. Current wireless transmission technology and Android-based operating software complement this. MAZeT offers the electronics and control systems for luminaire manufacturers and system integrators as series-manufactured OEM modules.Permanent color consistency over all light sources For the sensor-based color control for multi-channel LEDs, each lighting unit receives its target value from your smartphone via Bluetooth. The sensor measures the current LED-light and transmits the color value to the microcontroller of the box. The micro-controller compares the current value with the value of the target and calculates the new LED driver signals. This process is so quick that visually it is imperceptible. The color adjustment appears to be completely flicker-free. So with just a tap on the color triangle on your tablet or smartphone, all the light units display exactly the same under the same light or run synchronously in the scenario. Color uniformity is thus guaranteed across all units and within a unit for its lifetime. The system consists of simple standard components that are not especially focused on stability. Only the sensor in the system controller possesses the stability to endure without drift for the lifetime of the unit. The "closed-loop" with the sensor perceives all disruptions in the lighting system that affect the color or brightness as quasi-independent factors. Drifts of the LEDs and of the driver, mechanical tolerances of the optics and of the mechanics are perceived as spectral shifts of the light and are adjusted according to the target color. The electronics work so quickly that the adjustment is flicker-free, i.e. with no visible effect.About MAZeT MAZeT GmbH is a leading European engineering and manufacturing service provider. The company was founded in 1992 and is based in Jena. MAZeT develops, manufactures and distributes customer specific devices, software and ASICs distributes own products of the trademark JENCOLOR®. The broad technology offer and application know-how in this field of industry electronics and opto-sensor technology lets MAZeT GmbH be a competent and reliable service partner for every customized client-specific solution. Their expertise and components for custom applications are used throughout the entire sector of industrial metrology, control and automation as well as medical technology.Mandy Ahlendorf T +49 8151 9739098 E ma@ahlendorf-hueggenberg.comDiane Damer MAZeT GmbH Goeschwitzer Strasse 32 07745 Jena Germany T +49 3641 2809 039 F +49 3641 2809 12 E marketing|at|mazet.de