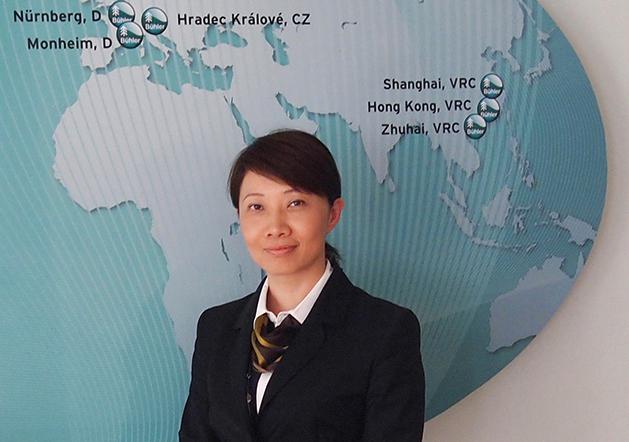 Nuremberg, 12. June 2014 – Effective May 1, Xiaobo Jia will assume responsibility for all Asia business of the Bühler Motor Group. As President of Buehler Motor Co., Ltd. and located in Shanghai she will expand the sales and production network of the Asian region.

“We are proud to have won such an competent and experienced executive. The commitment to Xiaobo Jia is clear signal of the strength of the Asia market withing our future strategy”, says Peter Muhr, President and CEO of Bühler Motor Group.

Xiaobo Jia previously worked at several positions at Behr GmbH & Co. KG in Shanghai, China.
She was the China Director and Chief Representative of Behr Shanghai Office from 2001 to 2006. Successfully she guided Behr to penetrate into China market from zero basis through planning phase to establishment of highly profitable business.

Afterwards, Xiaobo Jia worked as Deputy General Manager on behalf of Behr at a production Joint Venture between Behr GmbH & Co. KG and SAIC Motor Cooperation Ltd. (The biggest auto maker in China). She was in charge of marketing and sales for both Chinese and overseas markets, both OE customers and independent after market distributors.

Xiaobo Jia started her career from a Volkswagen JV – FAW-VW in Changchun, China. After 4 years of working as assistant to the First Vice President of FAW-VW, she moved to Germany for a 2 years MBA study at Steinbeis University Berlin.

With many years experience of the China automotive industry, Xiaobo Jia has very good connections with the key persons in OEMs and the market sensitivity.

Xiaobo Jia is a native Chinese with fluent English capability and she can communicate in German as well. Xiaobo Jia is married with 2 kids.

More than one of out every ten employees at Bühler Motor works in Research and Development. Our in-house sample shop and R&D department, combined with state-of-the-art test labs, enable Bühler to concentrate completely on quick and flexible development of customer specific drive solutions.

09-03-2018 | IT, New Media & Software
Chengdu Xiaobo Software Co., Ltd.
All-in-One Data Recovery Software for Different Loss Situations
In recent years, data recovery technology has developed rapidly, and data recovery is no longer only applicable to computer experts and data recovery experts. As data recovery software becomes easier to use, ordinary computer users can also use these data recovery software to recover data. Now, some excellent data recovery software is becoming more and more popular. It is suitable for ordinary computer users. It's easy to operate and guarantees excellent
10-22-2013 | Politics, Law & Society
GIDD
ANNOUNCEMENT OF THE GIUSEPPE MOTTA MEDAL LAUREATES 2013
20 September 2013 ANNOUNCEMENT OF THE GIUSEPPE MOTTA MEDAL LAUREATES 2013 Geneva, Switzerland. On the 20th September we hosted our annual conference andawards ceremony, which took place at GIDD building. The conference featured talks from key European and American politicians, businessmen, famous human rights defenders and social activists. Medal winners 2013: • Support for peace and democracy - Aung San Suu Kyi • Protection of human rights - Guillermo Fariñas • Work to achieve
12-29-2009 | Politics, Law & Society
Charta 08
Twitter page to Liu Xiaobo and the charter 08
Liu Xiaobo has signed as one of 10,000 Chinese the charter 08, a call to more democracy and human rights in China. In Christmas 2009 Liu Xiaobo was condemned to 11 years of custody. At a time in which Chinese authorities believe the attention of the democratic world is lower than commonly. For this reason a Twitter page was opened on the 1st of Christmas Day: http://twitter.com / charta08 The charter
Comments about openPR
We publish our press releases on openPR.de because we like people who are "open" - just like us.
Frank Obels, CEO, INCONET - Informationssysteme, Communication und Netzwerkberatung GmbH