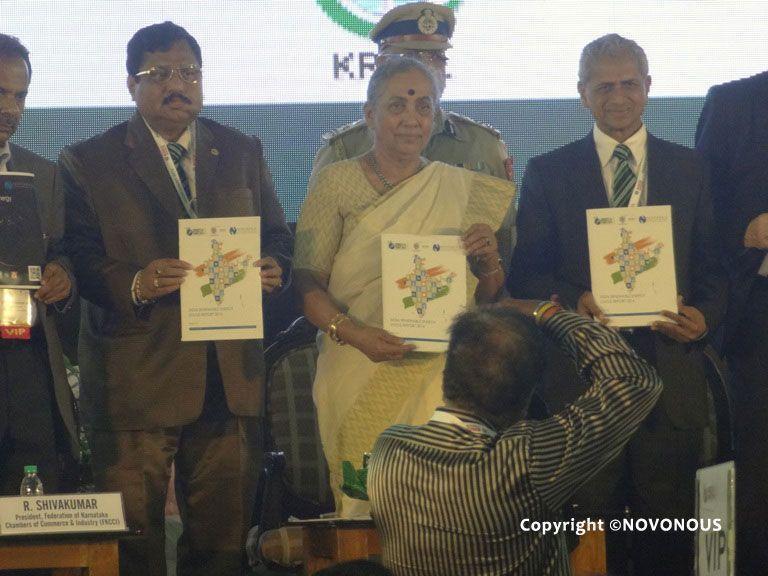 NOVONOUS, a company which offers market research, knowledge management and business intelligence services had participated at Green Summit 2014 which is being held at White Orchid Convention Centre , Bangalore from 5th June to 7th June 2014. Green Summit 2014 is expecting a participation of more than 100 speakers, 500 delegates, 250 organizations and 5000 visitors from across the globe. NOVONOUS will be one of the 120 exhibitors showcasing their company this year. This year, the NOVONOUS booth will be located at booth #B12.Green Summit 2014, an annual renewable energy event supported by the Government of Karnataka. Green Summit on the inaugural day coinciding with the World Environment Day on 5th June,2014, is an event which brings decision makers from government, industry leaders, investors and customers at one platform to address critical issues about growth and adoption of renewable energy.GREEN (Global Renewable Energy) Summit 2014 is being organized by Federation of Karnataka Chambers of Commerce and Industry (FKCCI) and MM Activ Sci-Tech Communications. Leading policy makers, global experts, industry captains, investors and SMEs and other stakeholders gather for the event on an annual basis, in order to network, meet, learn, build business and chart the future of renewable energy (RE) in Karnataka and India.The event was inaugurated in the hands of Mrs, Margaret Alva, Governor of Rajasthan, India. Also a report by NOVONOUS named “India Renewable Energy Status report 2014” was launched by the respected dignitaries. Few of the companies participating in the Green Summit exhibition are Tata BP Solar, Bosch, U Solar, EMVEE, JUWI, BESCOM(Bangalore Electricity Supply Company Ltd.), CWET(Centre for Wind Energy Technology), Mahindra Reva and many more Solar manufacturing and product companies. The manufacturers of Solar equipments are also participating along with a few unique products showcasing new opportunities in this segment.The First day was marked by the inauguration on 5th June at 11:00 AM followed by the Secretary’s conclave wherein the secretaries discussed about the current trends and the future of the industry, the current impediments and the opportunities in the renewable energy market in Karnataka and in India. Few of the promising measures which are being followed by few states in India and the existing policy and regulations and the long gestation period for approvals and the scope of single window clearance of the entry level companies were discussed. Different topics covering the power shortage in Karnataka, the new draft solar policy, MNRE regulations, Solar Water heaters, Distributed agriculture using Solar power. It was also stated that the tenders of 500 MW has already been floated. This was followed by a discussion on the Current industry status of the Solar Energy market. Also the potential of rooftop solar with a average price of INR 9.5/Unit along with the proposal of net metering was discussed.Also, the implementation of the Anti Dumping duty and its short and long term growth on the industry was discussed.Interestingly, initiatives are on to make the State transport department green with electric mobility. Also electric Vehicles were discussed along with their difficulties and the changes which happened in the past years and in the opportunities in the coming years.The power shortage and the implementation of the Solar policy in Karnataka was discussed. The problem in getting the purchase and seeking clearance of land for such installations was also discussed in details. Also there is a big untapped opportunity of Rooftop Solar and state government should take steps to initiate the net metering of such installations. Also the shortage of the DISCOMS to purchase the power from such installations was also discussed.The different cost of generation for all the different forms of renewable energy was also discussed n comparison with the other conventional non renewable energy. The role of JNSM was also discussed in details. Recommendations such as MNRE should also be a part of the grip planning group was also suggested.Thereafter there was a detailed discussion on the steps that need to be initiated to take the Wind Energy market to the next level. The problem of land hoarding by wind developers but no contribution to the grid was also discussed. The suggestion of a strict penalty for the defaulters was also discussed. Recommendations like allowing Industry to but land from farmers directly with all processes through a single window has been suggested. Due to the policy being changed almost every 6 months, there is a necessity of a strong policy which provides confidence to the industry and hence more investments can be attracted in the sector. The day was concluded by having a CEO conclave on Karnataka named “KARNATAKA: NEXT RE HUB TO CONTRIBUTE TO THE ENERGY SECURITY” which was held at Hotel Movenpick near BEL Circle, Bangalore. This CEO conclave is seen as a major interaction platform among the who’s who of the Renewable energy industry. Topics covering the opportunities and the current impediments in the Solar, Wind and also partly touching the Waste to Energy was discussed. NOVONOUS will be on hand to showcase its new syndicated research reports on the status of various renewable energy sectors like wind, solar, hydro, biomass and waste to energy (WtE) in India, providing attendees with an opportunity to gain unrivaled access to their sectors of interest as they will be able to purchase these reports immediately.If you wish to receive updates about the launch of these research reports please contact us at http://www.novonous.com/contact For more information on NOVONOUS services and upcoming reports, “Like” NOVONOUS on Facebook at https://www.facebook.com/novonous or “Follow” NOVONOUS on Twitter at https://twitter.com/novonous For Green Summit 2014 event video coverage visit our YouTube channel https://www.youtube.com/user/novonousAbout NOVONOUS NOVONOUS helps organizations differentiate themselves, break entry barriers, track investments, develop strategies and see through corporate fog by providing business intelligence that works for their business.NOVONOUS No. 579, Ground Floor, 16th Cross, 10th Main, ISRO Layout, Bangalore, India – 560078 Mr. Amitava Sen Vice President - Sales & Marketing Tel: +91-80-26860858